Sockless: Leaders of a New Cool 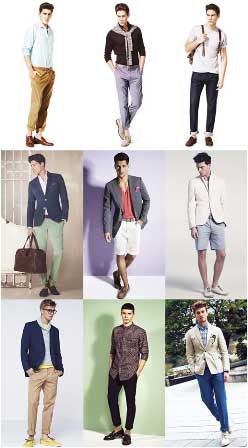 Going without socks will set your look apart from the competition this spring and summer (Photo courtesy of PrettyPlease.us).

As the spring sets and old man winter takes cover until he is called on again, the warm air brings amidst many fashions that scream the “burrrr” is finally gone!

Tank tops, shorts, and cool footwear indeed play their parts. But one thing is for certain, the trend of being fancy footloose is not new. Guys have taken on the role of going sockless for a long time.

Remember the days of being a child when we thought it was nice to run around inside or outside barefooted? Yes, those were the days; but yeah, back to the subject!

Easy-breezy feet seems to be trendsetting for guys. Whether it’s a day at the office or a night out on the town, the sockless epidemic is becoming widespread. So have you caught it?

The sockless look is running widespread.  No age knows it and it seems rather cool to join the trend. After all, who said you always had to wear your favorite fancy argyle socks to be fashionably correct?

From boat shoes to Chuck Taylor’s, or All-Stars as they are so often referred to, going without socks could indeed be the new cool.

Rappers like Jay-Z often refer to boat shoes, and for many others Chuck Taylor’s are simply the way to go.

Either shoe you choose, it’s meant to be worn sockless. Trust me, it’s just the cool thing to do!

Sockless shoes not only give the momentum of cool feet, but they also send the sense of cool, different, and trendsetting in my opinion.

So is it OK to go without socks in dress suits? Sure it is! Create your own style, your own worth.

For the traditional guy, wearing a suit can be boring, routine, and classic. For a guy willing to think outside of the box, wearing a suit and going sockless can be fun and creative.

Oh, you thought Will Smith was the first person to rock All-Stars with a tuxedo or suit back in the 1990s on his sitcom “The Fresh Prince of Bel Air?” The trend is hot and it continues to rise. Going without socks is definitely not a bad thing!

So, what ways can you rock this look and not feel like a fish out of water?

·         Boat shoes go well with cargo or camouflage shorts, a basic t-shirt and for flair maybe a shirt over the tee to add the extra kick.

·         All-Stars work in any situation whether it’s with the basic shorts and t-shirt or the modern day blue jeans with a jean vest flailing over a fitted tee. Both boat shoes and All-Stars create a personality of their own and are very eye-catching to say the least. I prefer them in bright colors!

Remember,when going without socks you don’t have to look like the oddball. Both boat shoes and All-Stars are comfortable shoes that can be worn with suits.

More and more guys are divvying up and taking off those socks! Want to try something different? Peel those socks off and declare yourself a leader of a new cool. Your feet will thank you later!