From Jheri Curl to Ramp: Men Discuss Worst Haircuts of all Time 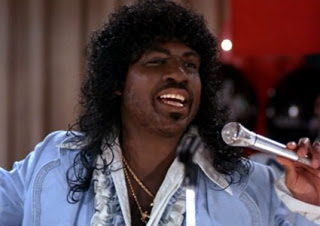 Did you make the mistake of rocking the jheri curl like Eddie Murphy (aka Jackson Heights’ own Randy Watson aka Joe the Policeman in the What’s Going Down episode of “That’s My Mama”) in Coming to America (Photo courtesy of Paramount Pictures)?

From Kane to Kwame to the King of Pop: Who Influenced Your Worst Haircut of All Time?

Men, what was the craziest haircut you’ve ever had?

Were you “Bad” like Mike and rocked a jheri curl?

Or maybe you were “Too Hype” like Kid ‘N Play, and had the flat top?

What hair style did you wear that at the time seemed like a good idea, but thinking about it now, you want to crawl under a rock?

You start to question why did you get that look? You think back to what was going on in the world and what celebrity you saw that influenced you to get the worst haircut of your life. What does your worst haircut tell about you and what you were going through at that time in your life?

Most women make huge changes with their hair based on a man. After a bad break up, some women want a fresh start, and they cut their hair.  Like Bernadette on Waiting to Exhale, during her divorce she cut her hair off because she needed to feel powerful. Is that the same for men?

“The worst haircut (style) I ever had was the beginning stages of dreadlocks,” says C.J. “Notice I said the beginning stages. I started growing my hair out to shed my past experiences from a bad relationship. I grew my hair for seven months, and that process for twisting my hair took me about 40 minutes. I had to sit underneath a hairdryer and I became impatient after 10-15 minutes.

“I left with the clamps in my head and tried to sleep with them so my hair could dry. I never did that again! I went to the barber about a week later and told him to chop it off! I didn’t like the frizzy, un-kept look.  It really didn’t fit me. Even though it was my worst haircut, it was a very cathartic experience to say the least. When you are with someone for such a long time and the relationship doesn’t workout, it’s almost like experiencing a death. I was in a grieving period so to speak. However, I didn’t grieve that hairstyle!”

So there’s proof that some men use haircuts to get over a relationship, but what are the other reasons you walked around looking like something you’ve tried to forget?

Maybe the reason you got that worst haircut was because of the times you were living in. You remember you wanted to be so cool that you tried to look like every celebrity that was hot at the time.  Who did you try to look like?

“I had a ramp in the ninth grade,” says a laughing J. Sean. “That takes me back to a cool time, but I looked crazy! That ramp was for sure my worst haircut of all times. My mom wanted me to have a better life, so I was in elementary and middle school with mostly Whites.  She thought that was better for my education. By the time I went to high school, I was finally in a diverse school, and I wanted to connect with my Blackness.

“At the time Troop was singing ‘All I Do is Think of You,’ Kid ‘N Play was rapping in House Party, and I wanted to fit in! Kwame had a ramp and at the top of his ramp, it was dyed gold. I wanted that gold in my hair but my mother said that was a no-go, so I bought the gold spray paint and hooked myself up. I remember this girl really liked me in school because I was getting a lot of attention because of my ramp. When people would see me they would call me Kane, like Big Daddy Kane, and what do you know, I found my Blackness during that time. When I look back at those pictures (though) I still wonder what I was thinking.”

“I would like to know what my mom was thinking,” asks Fletcher. “My mom put an S Curl on my head! I was mad as hell, especially looking back at the style. I remember her burning my scalp for that stuff to work. I only had waves for like a day because my hair was so nappy. Then she took me to Walgreens and asked an employee for extra strength and the guy said they didn’t have that yet. That was (my) most embarrassing and worst haircut. Now I rock dreads, and I don’t plan on cutting them!”

Sometimes parents aren’t the only ones to blame for a bad hairdo. There are a lot of guys who had a disagreement or two with their barbers. Some barbers have messed your hair up so bad, you got out of the chair ready to fight.

“One of the barbers I was going to cut my edge up too far back,” says Michael. “I didn’t look in the mirror afterwards because normally he does a good job. When I got home, my wife asked me why my hair looked different. I looked in the mirror and I was upset! I had to wear hats for a few days, and I got a new barber.”

Trey says, “I was in college, and my barber was cutting my hair in my room when the guard fell off. He cut a big bald spot in my head. The only thing I could tell him was get out of my room!”

Some of your worst haircuts make you cringe, or shake your head, but what about those haircuts that take you back to a cool nostalgic place. You know when you look at old pictures you are reminded of the best time in your life.

“I had an afro,” says a smiling David. “When I think about those times and wearing my afro I remember I could never get it as round and perfect as my older brother’s. During those times, brothers were drinking Boones Farm and malt liquor. We were loading up a car full of people and going to the dollar drive-in to watch Jim Kelly movies. We would look at Shaft and Foxy Brown because they had the best afros at the time. That was during a time when it was crucial to get an education. Blacks were dying to graduate high school (and) to go to college. It was definitely a different time.”

Ultimately, the best thing to be said about your worst haircut is it definitely brings back the greatest memories; for better or for worse!