The Apprentice’s Kwame Jackson Sounds Off on Ties, Donald Trump 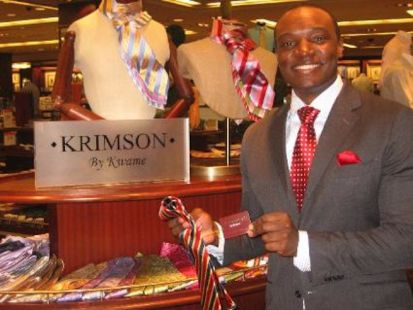 More Than an Apprentice

For most entrepreneurs and/or entertainers, being associated with real estate tycoon Donald Trump is a win-win situation, but not necessarily for businessman Kwame Jackson.

Sure, being an early contestant on the popular reality show “The Apprentice,” gave Jackson the visibility to launch his new clothing company, Krimson by Kwame, but that visibility also potentially links him to controversy, such as Trump’s controversial and some would say racist, comments about President Barack Obama and “the Blacks,” as he calls the Black community.

“It’s unfortunate that people associate me with Donald Trump because after his ill-advised comments about the president and how I feel those translated over to Black men in general who are educated.  I didn’t feel like I wanted to be in that camp as much anymore,” Jackson told Regal Magazine.

He especially disliked the fact that Trump wanted to see the transcript of a president who pulled himself up by his boot straps to become an Ivy League educated political force, but did not ask for the transcript of President George W. Bush who benefitted from the influence of his father when he was matriculating through school.

“I felt like as a Harvard graduate and as an African American who’s had those same challenges faced to me, that he was speaking to me,” Jackson said.  “And I felt that was offensive.  But, I personally have a new distaste for Mr. Trump because of it.”

Nevertheless, the comparisons between Kwame Jackson and Trump continue, because both have entered the fashion accessory game, after Jackson and COO Corwyn Thomas launched Krimson by Kwame.  Both Krimson and the Donald J. Trump Signature Collection tie line can be found at Macy’s, but for Jackson the comparisons end at that particular retailer.

“I think our styles are totally different,” Jackson continued.  “I think he’s kind of in the middle of the corporate lane.  We don’t really choose to go down that path.  Our style is more about, ‘when it’s important, it’s Krimson.’  So, we want to be more of an event-driven tie that says when you put our tie on, you’re putting it on to close.  We’re in the business of cool, confident, closing and class.”

Alton Smith of Houston, who recently purchased his first Krimson tie said, “I think the ties are very attractive.  They look like they have a lot of durability from the standpoint of lasting a long time.  I’ve gotten a lot of positive comments from other folks saying how sharp I look with the tie.”

Kwame Jackson and Thomas are both members of Kappa Alpha Psi Fraternity, Inc, initiated at the University of North Carolina at Chapel Hill and Southern University respectively, and Jackson said the style and grace of fraternity members had a huge impact on their line of ties.

He stated that Kappas such as BET founder Bob Johnson and the late tennis champion Arthur Ashe epitomized the fraternity’s influence on the ties, which targets well-dressed men, focused on achievement.

Kwame Jackson’s intentions with the Krimson brand was also to bring back the gentleman, turn-of-the-century style a la the classic novel The Great Gatsby, which was very popular on the Harvard campus when he was pursuing his Master’s degree in Business Administration.

He decided to name it Krimson because of the colors of his fraternity and the name of the Harvard newspaper.  The “K” is to pay homage to the fraternity’s name and his first name, which both begin with “K.”

Despite his recent feelings about Trump, one does not have to be a fan of “The Apprentice” or “Celebrity Apprentice” to know that anyone associated with “The Donald” is a genius in the field of business.  Kwame Jackson uses beautiful women to model his ties, knowing men are more apt to buy something from a beautiful woman that not.

But does using sex appeal to sell Krimson ties produce critics for his brand?

“It’s a double-edged sword without a doubt,” Jackson answered.  “Everyone knows sex sells.  It’s not something I created.  I’m not the first Madison Avenue advertiser to realize that, whether it’s Calvin Klein with his ads or other people who’ve used racier, sexually explicit shots.  We use what we call ‘Krimson Specialists,’ a focus on the fact that men use women’s opinions as the gospel when it comes to accessories.”

And no other woman’s opinion is viewed as gospel more than media mogul Oprah Winfrey who spotlighted Krimson ties as a Father’s Day favorite in O Magazine.  Jackson said being endorsed by Winfrey gave his brand instant “retail credibility” and “a real shot in the arm.”

And since that feature in O Magazine, the brand has taken off.  Krimson by Kwame can now be purchased at retail stores like Macy’s, Dillard’s, Belk and J.C. Penny.

So regardless if you associate him with Trump or a successful reality show, Kwame Jackson is well on his way to achieving the success of his former mentor, but only with a different outlook on life and with less controversy.