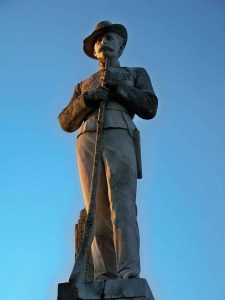 Confederate monuments like this one have been removed from all city-owned property in Richmond, Va.

Critics of the final removal had requested a delay.

But a judge refused to delay the removal of a statue of Gen. A.P. Hill from its prime spot in Virginia’s capital.

“This is something that commenced two years ago when we sought out to turn the page on our Confederate history and start writing a new chapter,” said Richmond, Va. Mayor Levar Stoney. “Today marks the last day of the Lost Cause.”

The Associated Press reported, “Richmond Circuit Court Judge David Eugene Cheek Sr. last week rejected a motion from four indirect descendants of Hill, who was killed in the final days of the Civil War, to stop the city’s removal plans…

“The city, a onetime capital of the Confederacy, began removing its many other Confederate monuments more than two years ago amid the racial justice protests that followed George Floyd’s murder. Among the notable monuments removed was an imposing statue of Gen. Stonewall Jackson, which was taken down from a concrete pedestal in 2020 along Richmond, Virginia’s famed Monument Avenue.”

Reuters reported that Hill’s towering statue stood for over 130 years and was the last to come down on Richmond, Va. city land.

The removal was delayed because of differing views of what to do with Hill’s remains, which were buried under the memorial.

Hill’s remains were interred under the monument about 25 years after the general’s death.

The Associated Press reported, “Many Confederate statues in Virginia were erected decades after the Civil War, during the Jim Crow era, when states imposed new segregation laws, and during the ‘Lost Cause’ movement, when historians and others tried to depict the South’s rebellion as a fight to defend states’ rights, not slavery. Some Confederate tributes remain in Richmond, but they’re on state land, including on Capitol Square surrounding the Virginia State Capitol building.”

Some of Hill’s descendants wanted possession of the Hill monument as they agreed that his remains should be reinterred in a cemetery in Culpeper, Va., which is near where Hill was born.

“It’s his headstone, said John Hill, 33, who said he is a cousin of the former Confederate general. “I just feel like anybody else’s headstone with their family name on it, you don’t’ want to see that come down.”

John Hill said he is against the removal of all Confederate statues because those monuments represent America’s history.

While he understands why many see the monuments as celebrating the enslavement of their ancestors, he said his ancestor never owned slaves.

He said, “All of his census documents show he never owned a slave, and he did not believe in slavery.”

Nevertheless, in October a judge decided that city officials, and not Hill’s descendants, would decide what to do with the removed monument.

City officials said the monument would be relocated to an undisclosed location before moving to the Black History Museum and Cultural Center of Virginia.

However, John Hill said the descendants would continue the fight to obtain the statue.

With the removal of the Hill monument, Richmond, Va. has removed approximately a dozen Confederate monuments.

Mayor Stoney said, “Richmond had more Confederate monuments than any other city in the United States of America, and we were the former Capitol of the Confederacy. And so, this wasn’t just two years of work, this was a hundred years of difficult work.”

Stoney continued, “I’m proud of my city. We’ve done something that a lot of communities have struggled with, and I think a ton of people are ready to turn the page.”

During protests against police brutality that erupted in 2020, many participants attempted to tear down Confederate monuments much to the chagrin of critics like former President Donald Trump and other Republican lawmakers.

Many African-American leaders pointed out what they called hypocrisy from Republicans when it comes to what history is to be preserved and what is to be ignored.

When many Black Americans wanted Confederate monuments taken down, many on the right claimed that the monuments preserved history.

But many critics on the left complained that when history offends Black Americans, some people say that is O.K. because America is preserving history.

However, when the same historical period offends some in the White community, many on the right attempt to change school curriculum and replace teachers and administrators for teaching “critical race theory.”

The concept of critical race theory is primarily taught in law school, and it studies how systemic racism has impacted the lives of people from the Black community.

Critical race theory is not taught in grade school.

Nevertheless, many Republican politicians and conservative media outlets have latched on to the law school elective as a campaign issue in recent years.
Regardless of the polarizing issue, many see the removal of monuments celebrating the Confederacy as a step forward.

According to Associated Press, “Amanda Lynch stopped by to watch the statue being taken down after dropping her kids off at school. Her daughter, Ava Holloway, was one of the two teenage Black ballerinas whose photo dancing on the state-owned Confederate Gen. Robert E. Lee statue in Richmond—with their fists raised in the air-caused a sensation on social media during racial protests in 2020. That statue was removed in September 2021.”

Lynch said, “So much of the fabric of Richmond is woven with pieces of the Civil War and slavery and racism…removing this will just be a good step forward, a symbolic step forward.”