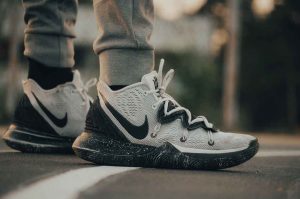 Kyrie Irving is looking for a potential shoe deal now that Nike has dropped him because he tweeted about a book and movie that many deem antisemitic.

When Brooklyn Nets star point guard Kyrie Irving created a firestorm for tweeting about a book and movie that some consider antisemitic, he lost time on the court and an endorsement shoe deal with Nike.

Now, it looks like the controversial sports star might have found a new home with a Black-owned shoe company called SIA.

“These shoes are made by a Black man,” said R&B star Musiq Soulchild. “His name is Devlin. He has his own company called SIA Collective…He’s actually in talks trying to work out a deal with Kyrie Irving.”

Kevin Keise of Yahoo Sports, reported, “SIA, which stands for Somewhere in America, is owned by Devlin Carter, a Black business owner, who said the brand has over 400,000 supporters…Soulchild made it clear that nothing is official yet, but he thinks the partnership will be a great move for the two.”

The neo-soul singer from Philadelphia said, “We don’t know, but we’re going to send good vibes out there. I think that will be an awesome decision.”

Yahoo’s Keise reported, “Irving is looking for a new shoe sponsor because of his breakup with Nike. The athletic sporting brand officially cut ties with the All-Star point guard after he tweeted out controversial content, which some deemed as antisemitic.

“Since the split, Irving has been playing in his old signature sneakers, but covers up the swoosh with a written message that reads: ‘I AM FREE’ and ‘Logo Here.’”

The swoosh is the signature logo/brand of Nike.

The potential partnership between Irving and SIA should find a significant number of supporters in the Black community because many have grown tired of Black stars using their fame to enrich the coffers of White-owned companies.

Since the days of Michael Jordan, shoe endorsement deals have been lucrative for Black athletes and others.

However, many in the Black community have preached that Black talent should use their power to create businesses and not just be figureheads or spokespeople.

When rap star Kanye West lost his deal with Adidas because of a slew of antisemitic comments, many saw it as encouragement for West to create a totally independent shoe company.

West’s Yeezy brand accounted for much of Adidas’ profits over the past few years.

At a time when Adidas had lost some pop culture relevance and street credibility, many believe West brought credibility and popularity back to Adidas.

When Jordan struck a deal with Nike in the early 1980s, Converse enjoyed more popularity than Nike in the streets and on the blacktop.

Air Jordans made Nike a behemoth of a company and made Jordan one of the wealthiest and most influential product pitch men in history.

Several years earlier, Earvin “Magic” Johnson passed up an ownership deal to be the face of Nike, instead opting for the guaranteed endorsement money of the more popular Converse at the time.

A decade before Johnson, Spencer Haywood missed out on an ownership proposal with Nike.

Both Johnson and Haywood would have made billions of dollars if they had taken the ownership deal with Phil Knight and Nike.

Now, with many up-and-coming Black shoe and clothing brands finding success because of social media and the Internet, athletes like Irving could possibly change the shoe game by becoming owners instead of sponsors or employees.

Famously, LaVar Ball, the father of NBA stars LaMelo Ball and Lonzo Ball, started a shoe brand for himself and his three sons (including LiAngelo Ball) called Big Baller Brand.

Unfortunately, many sneakerheads complained about the price of the shoes, the shoes not holding up to the rigors of a basketball game and not getting their orders early in the company’s existence.

Nevertheless, Ball’s brainchild might have changed the thinking of many star athletes as it pertains to ownership, which would prevent their cancellation from mainstream companies.

Khristopher J. Brooks of CBS News reported, “Irving’s shoe deal with Nike was one of the most lucrative deals, generating about $11 million in earnings for him every year, Sportico reported. Irving signed his first Nike shoe deal in 2014 and was scheduled to release a new model, the Kyrie 8s, last month.”

Despite the $11 million Irving earned annually from Nike, ownership would bring in even more riches.

Historically, Nike earns tens of billions of dollars every year.

In Oct. 2019, Nick DePaula of ESPN reported, “Two years ago with no sneaker company clamoring to sign him, the former second-round pick decided to create his own signature shoe from scratch. He then used the proceeds from auctioning off his own game-worn sneakers last season to help pay for the college educations of two students.”

The current member of the Dallas Mavericks said, “I used to draw shoes as a kid. It led me down the path of being creative and just wanting to do something new and have a little fun with it.”

A conversation Dinwiddie had with his father led him to use his shoe designs to create an actual shoe and sports apparel brand.

Dinwiddie said, “I’ve always loved shoes in general, and then I always love trying to boost my performance in whatever way possible. With basketball being my passion, the most critical piece of equipment we have is shoes…so I wanted to make a performance statement with it.”