Ky. Teacher Gets Terminated for Fracas, Allegedly Calling Student ‘Just Another Black Boy Who Got Shot’ 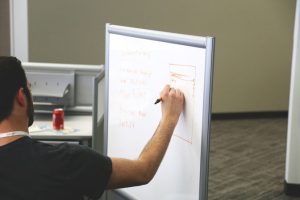 School districts across the country have seen an increase in teachers leaving the profession because of issues like school violence, lack of administrative support, COVID-19 concerns and more.

A video recently went viral showing Bennett, a White teacher, pinning an African-American student to the ground and pulling on his hair.

A Jefferson County Public Schools investigation uncovered that Bennett made “inappropriate comments” and “escalated the situation” according to his termination letter.

Gwen Aviles of The Insider wrote, “The letter stated that the incident, which occurred in August 2021 unfolded as such: the student, 16-year-old Jamir Strane, appeared to have initiated the fracas by punching Bennett in the back of the head, then Bennett ‘caught the student’ and put his ‘whole body weight on top of him.’

“In videos of the incident that have been posted to social media, students witnessing the altercation can be heard yelling ‘get the f*** off him’ to Bennett and trying to help Strane get out from under him.

“Though another adult emerged to deescalate the situation, resulting in Strane walking away from Bennett, the letter states that Bennett ‘proceeded to engage in the altercation.’ Bennett reportedly followed Strane down the hallway, had a verbal exchange with the student, and kicked him.”

Witnesses to the incident said that the altercation began when Bennett called Strane “just another Black boy who got shot.”

Strane is a gunshot victim, surviving a past drive by shooting.

The former science teacher admitted to saying something to his former student “about being shot.”

Strane admitted to several news outlets that he had gotten shot in a 2020 drive by shooting and that Bennett saying he “would just be another Black boy shot” caused him to react violently against his former teacher.

The 16-year-old also said that Bennett told him he was “going to end up in the streets dead.”

The viral video of the fight lasts approximately one minute and shows Bennett and Strane in a violent scuffle while other students circle around the two males.

Although the video captures the tussle, Bennett says the video footage misrepresents what he actually did to Strane during the altercation.

Although the fight occurred on August 24, 2021, Bennett did not get terminated until last month.

The Insider reported, “According to a report from Child Protective Services, Bennett’s comments were ‘triggering’ for Strane, ‘who suffers ongoing emotional trauma as a previous gunshot victim.’

“Bennett told the district investigators that he did not believe his comments were disparaging as Strane had previously bragged about the shooting, per the report.”

Reports show that Bennett justified his altercation with Strane because of Kentucky’s self-defense law.

The Kentucky self-defense law allows a person to use physical force to defend themselves if they feel it necessary to stop an imminent threat against them.

Bennett also showed pictures of his non-White family members to “dispel any myths of being a racist portrayed in the media.”

However, The Insider reported, “Traci Hunt, the principal of Marion C. Moore School, told district investigators that Bennett previously refused to complete the school’s mandatory implicit bias training and was involved with a previous incident with a school counselor, leading her to have concerns about his performance as a teacher before the altercation.

“The district investigation also revealed that Bennett, who can appeal his recent termination, had at least one other physical run-in with a student at a previous job.”

Erica Strane, the mother of the 16-year-old student, filed a lawsuit against Bennett and Jefferson County Public Schools, alleging in the lawsuit that the former science teacher slammed and pummeled her son while “yelling obscenities, profanity and racial slurs at him.”

However, the district’s investigation shows that Bennett did not use racial slurs or punch Strane.

Teachers have often received praise for putting themselves in harm’s way when it comes to active shooters on campus.

Furthermore, teachers often receive the task of breaking up physical fights between students.

But what if a teacher gets hit by a student and feels that their well-being is in danger?

On the streets, a person can defend themselves regardless of profession.

But as with the Strane case, many school districts fear lawsuits from parents if a teacher allegedly puts their hands on a student, even if it is to defend themselves.

Mike Jones (a father of three school age children) of Austin, Texas said teachers should be able to grab and tackle unruly students to restrain them.

Jones also said teachers should be able to sue students if the student hits them.

As a result of the pressures that some teachers face from on-campus violence and the COVID-19 pandemic to other issues, many teachers have left the profession totally.

Bridget Grumet of the Austin American-Statesman reported, “The Austin school district has seen a dramatic uptick in teacher departures over the past two years. Typically, between the start of the school year and the end of November, the district has about 80 teachers who decide to leave the classroom. In each of the past two years, that number has been closer to 200.

“Mind you, these are teachers who decided to leave before the semester is up. Others are nearing their breaking point but holding off on making a decision until the semester or school year ends…”