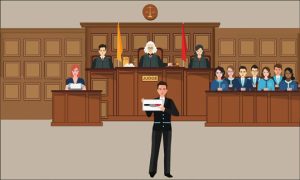 “This court has found that there appears to be intentional discrimination,” said Judge Timothy Walmsley.

As the trial prepares to begin for the men accused of killing Ahmaud Arbery, Judge Walmsely admitted that the jury of 11 White people and one African-American shows purposeful discrimination on the part of the defense.

Nevertheless, Walmsely has allowed the trial to continue despite the jury not having a diverse pool of participants.

After the final selection of jurors, prosecutors accused the defense of intentionally striking qualified Black jurors and abusing some of those strikes on the race of the particular jurors.

Prosecutors presented their argument of racial discrimination to the court for over two hours before Walmsely denied their claims, saying that there were valid reasons, other than race, as to why those potential jurors did not make the final cut.

Walmsely said, “One of the challenges that I think counsel recognized in this case is the racial overtones in the case…This is sort of the continuation of a conversation that I think will continue for a long time, with respect to this case, all the defense needs to do is provide that legitimate, nondiscriminatory, clear, reasonably specific and related reason” for striking a potential juror and the defense would have met the burden.

Arbery’s mother Wanda Cooper-Jones said that she was “shocked” that the court only chose one African-American juror.

Cooper-Jones said, “I mean, that was devastating.”

CNN reported, “The jurors must decide whether Gregory McMichael and his son, Travis McMichael, along with their neighbor William ‘Roddie’ Bryan, Jr., are guilty of malice and felony murder. They have pleaded not guilty. The defendants also face charges of aggravated assault, false imprisonment and criminal attempt to commit false imprisonment.”

While many civil rights attorneys and leaders blasted the decision to only include one African-American juror, defense attorneys were pleased with the makeup of the jury, for the most part.

“We are very pleased that we have been able to select now 16 members of this community,” said Jason Sheffield, an attorney for Travis McMichael, who called the jury selection process “exhaustive.”

He continued, “Where this community can now decide the pending issues of this indictment, and we truly believe that they will do so fairly and in keeping with what we all understand justice to be about.”

On Feb. 23, 2020, Arbery lost his life after the McMichaels followed him because they allegedly suspected him of burglarizing homes in the Brunswick, Ga. neighborhood.

Arbery had a history of jogging through the neighborhood for exercise.

Furthermore, video shows Arbery looking at homes under construction in the area.

The McMichaels said that they were making a citizen’s arrest when they confronted Arbery in a pickup truck.

When Arbery defended himself by grabbing at the gun, he was shot and killed.

The men did not get arrested immediately following the shooting of Arbery.

But when video of the encounter surfaced, the three men got arrested for their alleged roles in the killing of Arbery.

CNN reported that the court summoned approximately 1,000 potential jurors but fewer than half showed up for jury duty.

Furthermore, many potential jurors admitted that they had already formed strong opinions about the killing of Arbery.

Some potential jurors said that they already knew the defendants.

Others even said that they feared sitting on the jury because of what potentially could happen to the community based on the outcome of the case.

Last week, one woman told attorneys, “I think I would be naïve to think there couldn’t be real-world repercussions.”

The judge told jurors to report this morning at 9 A.M.

They will be impaneled directly before opening statements.

Previously, defense attorneys expressed concern over how many potential jurors did not show up for jury duty and how a particular socioeconomic group had no representation on the jury.

Bryan’s defense attorney Kevin Gough told the court, “It would appear that White males born in the South, over 40 years of age, without four-year college degrees, sometimes euphemistically known as ‘Bubba’ or ‘Joe Six Pack,’ seem to be significantly underrepresented.

“Without meaning to be stereotypically in any way, I do think there is a real question in this case whether that demographic is underrepresented in this jury pool. And if it is, then we have a problem with that.”

Sheffield said that the low turnout impacted the makeup of the jury in a way that might be detrimental to the defense.

He said the jury pool did not, “fairly reflect the accused in this case, where the accused can’t look across the courtroom and see persons that are similarly situated to themselves.”

Pate said, “Participation in the jury pool is important, but only so much to establish diversity of race and perhaps gender, but not ‘Bubba’ background, whatever that may be. I’ve represented doctors who have gone on trial. Now, was my jury made up of a bunch of doctors? Of course not.

“Even if there was no ‘Bubbas,’ as long as the lawyers are not removing people solely because of race, there’s really no problem. You have no right to a ‘Bubba’-rich jury pool.”