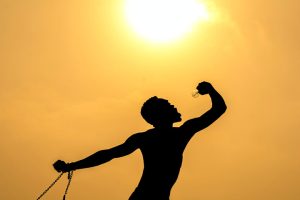 American corporations, institutions of higher learning and the country as a whole got wealthy off free Black labor.

Infamously, the country, many American corporations and institutions of higher learning got wealthy from free slave labor during the infancy of this country.

As a result, many activists demand reparations for the descendants of slaves to make amends for one of the country’s original sins.

Michael Nishimura, 29, a doctoral student and organizer said, “Just as Black Americans supported our community’s struggle for redress, we will strive to support and show solidarity with Black people as they fight for reparations today.”

In August, Nishimura hosted a virtual town hall meeting in which leaders of the Black reparations movement and generations of Japanese American activists spoke alongside each other in commemoration of the 40th anniversary of the Commission on Wartime Relocation and Internment of Civilians hearings, which led to Japanese Americans, who got placed in internment camps during World War II, receiving reparations.

NBC News reported, “The event was hosted by Japanese American social justice organizations Nikkei Progressives and Nikkei for Civil Rights and Redress, which are part of a growing coalition of organizations pushing for the passage of H.R. 40, the federal bill to create a commission to study reparations for Black Americans.

“Originally introduced by Democratic Rep. John Conyers of Michigan in 1989, H.R. 40 has recently gained momentum amid the country’s reckoning over race and justice. The House Judiciary Committee advanced it in April, and the bill awaits a vote in the House.

“Over the past year, Japanese Americans have been key proponents of H.R. 40, organizing letter-writing campaigns, webinars, phone-banking sessions and town hall meetings that have been ‘essential’ to the effort, according to Kenniss Henry, co-chair of the National Coalition of Blacks for Reparations in America’s national legislative commission.

“In addition to contributing people power, Japanese American organizers are sharing something perhaps more valuable: their first-hand knowledge of the redress process.”

While the fight for reparations for the enslavement of Black people has supporters and detractors, knowledgeable human beings cannot dispute the fact that Black slaves contributed greatly to the wealth of America and the wealth of American companies and schools, especially those from the Ivy League, and received nothing in return.

According to History.com, “If the Confederacy had been a separate nation, it would have ranked as the fourth richest in the world at the start of the Civil War. The slave economy had been very good to American prosperity. By the start of the war, the South was producing 75 percent of the world’s cotton and creating more millionaires per capita in the Mississippi River valley than anywhere in the nation. Enslaved workers represented Southern planters’ most significant investment—and the bulk of their wealth.”

Not only did prominent White families get wealthy from free Black labor, but many current Wall Street corporations also got wealthy off slavery like banks and insurance firms.

“They don’t realize that enslaved people built the wall after which Wall Street is named,” said Stacey Toussaint, the boss of Inside Out Tours, a New York City slavery and Underground Railroad tour company.

BBC reported, “To raise the money to start many future plantation owners turned to capital markets in London—selling debt that was used to purchase boats, goods and eventually people.

“Later in the 19th Century, US banks and southern states would sell securities that helped fund the expansion 0f slave run plantations.

“To balance the risk that came with forcibly bringing humans from Africa to America insurance policies were purchased.

“These policies protected against the risk of a boat sinking, and the risks of losing individual slaves once they made it to America.

“Some of the largest insurance firms in the US—New York Life, AIG and Aetna—sold policies that insured slave owners would be compensated if the slaves they owned were injured and killed…

“In 2005, JP Morgan Chase, currently the biggest bank in the US, admitted that two of its subsidiaries—Citizens’ Bank and Canal Bank in Louisiana—accepted enslaved people as collateral for loans. If the plantation owners defaulted on loan payment the banks took ownership of the slave.”

Other banks to benefit from the slave trade in a similar manner include the predecessors that made up Citibank, Bank of America and Wells Fargo.

Despite getting rich off free Black labor, many Black people endure discrimination when it comes to getting loans from banks for housing and starting businesses.

Furthermore, many Black homeowners see their property undervalued because a Black family lives there.

However, those same families see their home values increase exponentially when they let a White family pose as the homeowner of the very same home.

Those things lead to the wealth gap between Black Americans and White Americans.

The Black reparations movement leaders believe giving the descendants of slaves reparations will help decrease the wealth gap, which in turn might decrease systemic racism in America.

Systemic racism does not exist without the abuse of power.

And Black Americans have suffered racism and oppression partly because of a lack of wealth and power.

Even after slavery when Black Americans pulled themselves up from their own bootstraps, some White Americans taking offense to the success of Black people from Tulsa, Okla. to Rosewood, Fla, burned those figurative boots to the ground out of jealousy, often killing the Black wearers of those fancy boots.

As a result of that reality, many Black activists and Japanese American activists have called for some type of reparations for Black Americans not just for the wealth created off their backs by slave owners and businesses that profited from the slave trade, but also because of the “re-enslavement” of Black people after emancipation, when prisons leased or sold “prisoners” to companies looking to get rich from free Black labor.