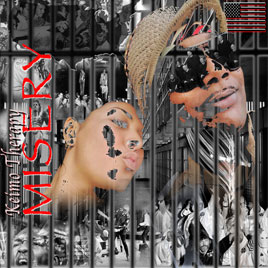 Man has not created a box big enough to fit Keimo Therapy’s talents inside.

Self-contained does not fully describe what this brother does from writing, producing and performing his own music, producing, filming and editing his own music videos and using his graphic design skills to create his own cover art, all while recording in his own studio.

Keimo Therapy epitomizes the term self-hyphenate, which Oxford Languages defines as “a person, especially a celebrity, with several professions or skills.”

Although Keimo Therapy, also known as Rude Boy, has a bachelor’s degree and master’s degree from Texas Southern University in Communications (Radio, Television and Film), his purpose and passion has always begun and ended with music.

Growing up in the U.S. Virgin Islands before making his way to Texas via New York, Keimo Therapy described himself as a weird child because he listened to all genres of music, which impacts his music to this day.

While many of his friends and family members in the Caribbean listened to only reggae and calypso music, Keimo Therapy also gravitated to pop music from Michael Jackson, hip-hop as well as country music.

Keimo Therapy put all those influences into his own flavor of music that he has christened, Southern Caribbean.

But as an expert behind the camera also, he wanted to show his fans where his Southern Caribbean musical roots or nucleus as Keimo Therapy describes it, began before he made his way to Texas instead of just telling them his story.

Keimo filmed a video in the Virgin Islands with his family’s home in the background.

He also filmed the video for a track called “Friday” from his 2019 album “Keimo Therapy aka Rude Boy,” which features his wife, singer Lady Grace, in snowy New York City.

Keimo Therapy lived in New York before moving to Waco, Texas then to Houston.

While he has recently focused his career on his solo efforts, Keimo Therapy is not new to the music game, especially in H-Town because he has collaborated with some of the biggest names in Houston hip-hop as a producer.

Back in the day, he produced tracks for many rappers from the Screwed Up Click while working with Wreckshop Records.

It was at Wreckshop that he learned much of what he knows about the music business from the label’s CEO, D-Reck Dixon.

With the fact that the independent hip-hop scene was so prosperous in the 1990s and 2000s, it should come as no surprise that Keimo Therapy launched his own publishing company Soul Ravers Publishing (ASCAP) and record label Rude Boy Recordz, Inc. all under the umbrella of the parent company, Any Event Media, LLC.

But the independent music scene of the new millennium does present its challenges to new artists because it has changed drastically since Keimo Therapy first entered the game because of the Internet and social media.

Many record labels have begun to sign artists mainly on social media popularity, and as a result artist development from labels have almost become non-existent.

Back in the day, record labels would spend time developing an artist’s image, teaching them how to do interviews and helping them produce their music.

At Motown Records, Berry Gordy referred to his artist development set-up as an assembly line because of his experience working at the Ford Motor Company plant.

Each department had a different task in preparing a new act for the spotlight.

Now, many labels have bypassed that work and instead latch on to new artists once they have proven themselves independently with the public.

Keimo Therapy said, “(Record labels) see now the platform has changed. Music is being developed now through social apps and these social media platforms. People are almost curating their own s**t, kinda like I’m doing.

“And the people are gravitating towards it and they’re taking out the work the labels used to do. And once the labels see these boys are getting numbers, then they step in because if it’s working for them with a little bit of nothing, when (they) put they’re energy behind it, we’re guaranteed money. They’re looking at numbers, not the actual craft or artform.”

Luckily, for the multi-hyphenate Keimo Therapy, his background in communications at Texas Southern was like artist development, and the preparation he received at the Houston HBCU (Historically Black Colleges and Universities) prepared him for the spotlight.

Code switching and giving interviews is just as much second nature as producing music or working behind the lens of a camera.

While many people call themselves self-contained, some have obvious weaknesses in one area or another.

However, Keimo Therapy shines no matter which hat he wears.

But now the spotlight is on his musical skills, and his upcoming album “Son of Puddin,” which has something for all listeners, regardless of the genre of choice.

Just like Keimo Therapy wears several hats from a creative perspective, the content he creates shows various sides of his personality from the ladies’ man to the guy kickin’ it at the club to the spiritual side.

And keeping his family involved in his musical efforts from his wife to his late father shows what is really important for the native of the U.S. Virgin Islands.

The name of the album comes from Keimo’s late father’s nickname, “Puddin.”

The single “Kick it With This…(Rude Boy)” is a shout out to the sexy ladies and is like a blueprint on how to pursue and satisfy a real woman.

On the track “Misery” featuring Lady Grace, Keimo Therapy touches the heart of everyone that has struggled to do the right thing in life.

While suffering through the difficulties of life, Keimo Therapy and Lady Grace look to God for answers and directions as they attempt to hold on throughout trials and tribulations.

On “Misery,” Keimo sings, “Help us father. For we are lost souls. As we journey through the shadow of death. We shall fear no evil.”

But it is the song “Bumpin’” featuring Lady Grace that might make the most noise now that nightclubs and bars are reopening as the country gets the COVID-19 pandemic under control.

The song has an energy and beat perfect for the club, in addition to a dance to go along with the song.

It would come as no surprise to see people gravitating to “Bumpin’” as they release a year’s worth of pent-up energy by returning to the dance floor.

And it will come as no surprise if 2021 is the year that all the pent-up talent that Keimo Therapy possess busts through that proverbial box and takes his Southern Caribbean sound worldwide.