In Midst of Nick Cannon Controversy, ViacomCBS Partners with NAACP 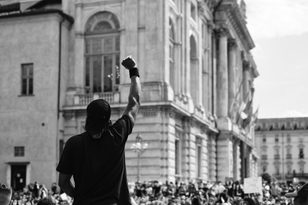 The national conversation about racial injustice has led to a partnership between CBS and the NAACP.

The CBS/NAACP partnership will include the development of scripted, unscripted and documentary programs for placement on CBS’s broadcast, cable and streaming channels.

“In this moment of national awakening, the time has never been better to further tell the stories of the African-American experience,” said NAACP CEO/President Derrick Johnson.

CBS and NAACP will form a team to tell inclusive stories via acquisition, development and production of unique content.

“An important way to diversify and grow our storytelling is to expand our horizons beyond the traditional studio-producer system,” said CBS Entertainment Group CEO/President George Cheeks.

On a podcast episode with Professor Griff, formerly of the rap group Public Enemy, Cannon said that African-Americans are the true Hebrew Israelites.

Cannon also referred to White people as animals and savages.

After saying that Black people are the true Hebrews and the Jews have taken over their identity, he began talking about skin color saying, “And I’m going to say this carefully,” people without darker skin are “a little less,” have a “deficiency” and have to act out in fear and commit violent acts to survive.

In reference to Jews, White Americans and Europeans, “They had to be savages.”

ViacomCBS said, “We have spoken with Nick Cannon about an episode of his podcast ‘Cannon’s Class’ on YouTube, which promoted hateful speech and spread anti-Semitic conspiracy theories.

“While we support ongoing education and dialogue in the fight against bigotry, we are deeply troubled that Nick has failed to acknowledge or apologize for perpetuating anti-Semitism, and we are terminating our relationship with him.

“We are committed to doing better in our response to incidents of anti-Semitism, racism and bigotry. ViacomCBS will have further announcements on our efforts to combat hate of all kinds.”

The rapper and comedian also hosts shows like “The Masked Singer” on Fox.

Furthermore, Cannon will host his own talk show titled simply “Nick Cannon” on Fox, which will feature music, comedy, sketches, games along with pop culture and celebrity interviews.

According to imdb.com, “Nick Cannon” will premiere on Monday, Oct. 5.

Fox did not respond to the Associated Press for a comment about whether Cannon will still host the upcoming talk show, “Nick Cannon.”

Fox said that Cannon would continue to host “The Masked Singer.”

On Facebook, Cannon wrote, “I do not condone hate speech nor the spread of hateful rhetoric…The Black and Jewish communities have both faced enormous hatred, oppression persecution and prejudice for thousands of years and in many ways have and will continue to work together to overcome these obstacles.”

Cannon continued, “In today’s conversation about anti-racism and social justice, I think we all—including myself—must continue educating one another and embrace uncomfortable conversations—it’s the only way we ALL get better…

“Until then, I hold myself accountable for this moment and take full responsibility because My intentions are only to show that as a beautiful human species we have way more commonalities than differences, So let’s embrace those as well as each other. We All Family!”

Cannon said that he would take a break from his radio show “Nick Cannon Mornings” on Power 106 in Los Angeles.

“I have decided to take some time away from my radio show so I can commit myself to deeper, more thorough reflection and education,” he said via Facebook. “I will use this time to establish an action plan towards real, impactful change and advocacy aimed at bringing people together.”

Despite his contrition and termination, many celebrities have come to Cannon’s defense.

However, Cannon did not escape criticism from some legends in the African-American community.

He did not mention Cannon by name in his article.

Stephen Jackson, who had become a vocal social justice activist after the death of his friend George Floyd in Minneapolis, faced criticism for agreeing with DeSean Jackson’s social media posts.

Abdul-Jabbar wrote, “This is the kind of dehumanizing characterization of a people that causes the police abuses that killed (Stephen Jackson’s) friend.”

The six-time NBA champion also wrote, “When reading the dark squishy entrails of popular culture, meh-rage in the face of sustained prejudice is an indisputable sign of the Apatholypse: apathy to all forms of social justice. After all, if it’s O.K. to discriminate against one group of people by hauling out cultural stereotypes without much pushback, it must be O.K. to do the same to others. Illogic begets illogic.”