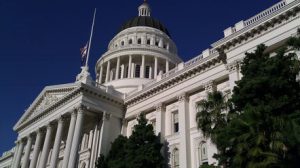 Georgia senatorial candidate and former football star Herschel Walker has tried to distance himself from allegations that he paid a former girlfriend to have an abortion.

The news has led to criticism of Walker because of his staunch stance against abortion.

Political reporter Roger Sollenberger of The Daily Beast reported, “A woman who asked not to be identified out of privacy concerns told The Daily Beast that after she and Walker conceived a child while they were dating in 2009, he urged her to get an abortion. The woman said she had the procedure and that Walker reimbursed her for it.

“She supported these claims with a $575 receipt from the abortion clinic, a ‘get well’ card from Walker, a bank deposit receipt that included an image of a signed $700 personal check from Walker.”

The woman told The Daily Beast that she gave a ballpark estimate about the cost of the abortion to Walker after googling the procedure.

She said that explains why there was a $125 difference in addition to the costs for travel and recovery costs.

The Daily Beast reported that they verified the woman’s story by speaking to a friend of the woman that was around for the procedure.

Additionally, the friend took care of Walker’s girlfriend during her recovery from the abortion.

The woman said that Walker told her it was “not the right time” for him to have a baby.

When asked why she chose now to speak up, she replied that she had grown frustrated because of his hardline pro-life platform.

She said, “I just can’t with the hypocrisy anymore. We all deserve better.”

The Daily Beast spoke with Walker’s personal and campaign lawyer Robert Ingram about the abortion allegations.

Walker has since released a statement calling the accusations a “flat-out-lie,” adding that he denied the allegations in the “strongest possible terms.”

The former Heisman Trophy winner from University of Georgia said, “I’m not taking this anymore. I’m planning to sue Daily Beast for this defamatory lie. It will be filed in the morning.”

When Ingram asked The Daily Beast to expose the woman, the media outlet refused.

However, Walker’s son Christian Walker seems to have validated some of the negative allegations that have come out about his father since he began running to oust Sen. Raphael Warnock (D-Ga.)

Christian Walker, 23, said, “Every member of Herschel Walker’s family asked him not to run for office, because we all knew (some of his) past. Every single one. He decided to give us the middle finger and air out all of his dirty laundry in public, while simultaneously lying about it. I’m done.”

Despite many of Walker’s critics praising his son for speaking out about his father’s alleged dirty laundry, everyone is not ready to heap praise on the younger Walker.

Charles Blow of the New York Times labeled the younger Walker as a “nasty piece of work” and called his father “the anti-Colin Kaepernick.”

“A Black football player who wouldn’t resist but acquiesce, one who wouldn’t campaign for Black lives but against them, one who wasn’t articulate and principled but unintelligible and fraudulent. Herschel helped give cover for Trump’s racism in the heat of his re-election bid, so Trump rewarded him by supporting him for Senate.”

The younger Walker said, “I know my mom and I would really appreciate if my father Herschel Walker stopped lying and making a mockery of us. You’re not a ‘family man’ when you left us to bang a bunch of women, threatened to kill us, and had us move over six times in six months running from your violence.”

A Bank of America deposit slip shows that Walker wrote the woman a check for $700 on Sept. 17 of that same year.

She said that Walker mailed the check inside a “get well soon” card.

Sollenberger reported, “The front of that card features a drawing of a steaming cup of tea and reads, ‘Rest, Relax …’ The message continues on the inside of the card: ‘…Recover.’”

Although Walker has said in interviews that he does not know this woman, the woman, who is a registered Democrat, said that she still speaks with Walker and that they have a child together.

She said that she did not know of Walker’s senatorial plans until the former Dallas Cowboys running back made his announcement in August 2021.

After that announcement, she said that people from Walker’s campaign had asked her to publicly vouch for his character.

She said that the campaign had reached out to her as recently as August 2022.

Today, the Walker campaign fired its political director with less than one month until the election.

Gabby Orr and Michael Warren of CNN reported, “The departure of Taylor Crowe, who previously held the same role for ex-GOP Sen. David Perdue’s failed bid for governor this year, comes just weeks before Election Day in the crucial Senate contest against Democratic incumbent Raphael Warnock. With an evenly split Senate, Republicans are hoping to flip the Georgia seat as they look to take control of the chamber.

“Two people familiar with the matter said Crowe was fired after suspected leaking to the media. It is unclear if there were any other factors at play.”