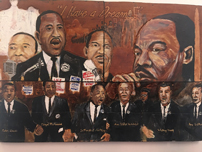 In less than a week’s time, three civil rights icons joined the ancestors in the sky.

Civil Rights Activists and the HBCUs that Raised Them

It should come as no surprise to any person with any knowledge of American history that many of the most renowned civil rights leaders of the 19th and 2oth century came from Historically Black Colleges and Universities (HBCUs).

Back in the day, African-Americans often could not attend historically White colleges and universities because of segregation laws, so the best and the brightest often attended and/or graduated from HBCUs.

And when African-American leaders began challenging the racial caste system in America, HBCU students and graduates often led the charge for freedom, integration and equality.

With the recent passing of Rep. John Lewis (D-Ga.), one of the last of the great 20th century civil rights leaders joined the ancestors high in the sky.

Therefore, there is no better time than the present to honor the heroes of yesterday and the HBCUs that raised them.

Martin Luther King, Jr. (Morehouse College)—Martin Luther King, Jr. is arguably the most influential civil rights leader of all time. The Atlanta native led the Montgomery Bus Boycott, helped usher in sweeping legislation with the Civil Rights Act of 1964 and the Voting Rights of 1965 and was one of the most vocal critics of the Vietnam War.

John Lewis (Fisk University)—John Lewis was the youngest speaker at the March on Washington at 23 years old. Lewis had his skull fractured by a police officer on the Edmond Pettus Bridge in Selma, Ala. Prior to beginning his career as a politician, Lewis served as the head of the Student Nonviolent Coordinating Committee (SNCC) before the organization went in another direction under Stokely Carmichael.

Jesse Jackson (North Carolina A&T University)—Like John Lewis and Stokely Carmichael, Jesse Jackson became involved in the Civil Rights Movement as a college student. Jackson marched with Martin Luther King, Jr. in Selma, Ala. in 1965. He also began working with the Southern Christian Leadership Conference (SCLC) upon graduating from what is now known as North Carolina A&T. King named him director of SCLC’s Operation Breadbasket. After leaving SCLC, Jackson started Operation PUSH in Chicago, which promoted Black self-help and gave Jackson a political pulpit. He later ran twice for president and started the National Rainbow Coalition in 1984, which merged with Operation PUSH in 1996.

Bayard Rustin (Wilberforce University/Cheyney State University)—Bayard Rustin’s sexuality made him a controversial leader in an era in which the LGBTQ community almost always lived in the shadows. However, his organizing skills and influence contributed greatly to the fight for equal rights. He organized the March on Washington.

Medgar Evers (Alcorn State University)—Before the civil rights movement, Mississippi was a bastion for racism and oppression. That reality makes Medgar Evers’ work in Mississippi that much more inspiring. Evers served as the first field secretary for the NAACP in Mississippi. In his role, he led economic boycotts, led voter registration efforts and investigated crimes against African-Americans. Byron De La Beckwith assassinated Evers in his Jackson, Miss. driveway in 1963.

Barbara Jordan (Texas Southern University)—Barbara Jordan went all the way from Fifth Ward in Houston to being a keynote speaker at the 1976 Democratic National Convention. Not bad for the product of Texas Southern University. Although Jordan did not have a history marching for justice, she played a significant role on civil rights because of her relationship with former President Lyndon B. Johnson. She later took her calling to help the disadvantaged and disenfranchised to the United States House of Representatives.

W.E.B. DuBois (Fisk University)—W.E.B. DuBois co-founded the NAACP in 1909, arguably the most influential civil rights organization in American history. DuBois also wrote “The Souls of Black Folk” and dedicated the majority of his life to the uplift of his community in the 19th and 20th centuries. DuBois became Harvard University’s first African-American Ph.D. graduate in 1895. The scholar and activist coined the phrase “the talented tenth,” which meant one in 10 African-Americans would become leaders in their community. He believed the talented tenth would lead the race into true equality. DuBois rose to fame after he criticized Booker T. Washington’s Atlanta Compromise for encouraging African-Americans to settle for vocational jobs instead of pursuing higher education and political office.

Stokely Carmichael (Howard University)—Stokely Carmichael went from a nonviolent civil rights leader in overalls to Black Power advocate to Pan-African leader in less than 10 years. Many saw him as a mix between Malcolm X and Martin Luther King. The FBI feared he could have a messiah-like impact on the Black community as well as the anti-Vietnam War movement.