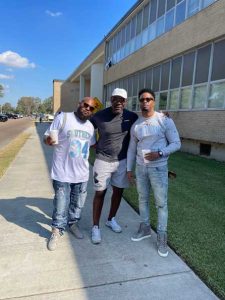 To many graduates and students of Historically Black Colleges and Universities (HBCU), homecomings at HBCUs seem like the biggest and best family reunion of all time.

However, with the COVID-19 pandemic shutting down or altering many homecoming celebrations over the last couple of years, homecomings this fall have returned to normal, and local businesses have taken full advantage.

“There’s like a $2.5 million economic impact that comes into the city (of Durham, N.C.) with all of the events we have,” said Akua Matherson, North Carolina Central University’s chief financial officer.

Homecomings at HBCUs often involve a football game, step shows in which fraternities and sororities compete for top prize and bragging rights, concerts featuring the hottest acts of the day in urban music, parades in which many people in the community come out to support, talent shows, gospel events and an endless number of parties.

Graduates from both institutions snatched up hotel rooms from south Baton Rouge to the Scotlandville area in north Baton Rouge.

Fraternities and sororities held countless parties for the younger crowd.

Meanwhile, alumni members and other party promoters held events for the grown and sexy crowd returning to their old college stomping grounds.

That scene in Baton Rouge is like scenes in every town that has an HBCU nearby.

Unfortunately for the businesses in those areas, the money that they normally receive during a normal homecoming weekend decreased over the last couple of years due to COVID-19.

The money that businesses lost during the pandemic and the inflation that has resulted because of the pandemic, led to many companies charging more for homecoming festivities and merchandise.

The price for food vendors rose $500 and $400 for general item merchants at North Carolina Central’s homecoming.

The Grio staff reported, “Records show that the vendor costs at Howard University doubled from 2018 to $550 for early registrants and $750 for late registrants.

“According to Tiffany Rose, an event planner who organizes an alumni party during Howard’s homecoming, she raised ticket prices from $35 to $40 due to rising venue costs. Still, she has noticed at least a 200-person increase in the number of ticket sales.”

Philip Garner, who owns the clothing company Dope Apparel said the higher costs of doing businesses at HBCU homecoming is worth it because of the increased revenue he made.

On the first day of Hampton University’s homecoming in Hampton, Va., Garner said he sold out of more than 300 t-shirts, which earned him more than $7,500.

Garner said, “I was exhausted but, you know, this is normally my best sales weekend.”

For Jackson, Miss., it seems like every weekend that there is a home football game, businesses do well.

Jackson, Miss. has seen a boost in the economy thanks to the excitement coach Deion Sanders has brought to the Jackson State University (JSU) football team, which includes signing the top high school defensive back in the country from last year, Travis Hunter.

“Guests filled hotels, frequented restaurants, and patronized a multitude of businesses all in the name of Jackson State,” said school President Thomas in a statement on the school’s website. “This furthers punctuates that JSU is not only an academic powerhouse but an economic driver of this city. Homecoming always reminds of why JSU is so deeply cherished.”

The excitement that has led to profits for businesses in Jackson, Miss. has also led to financial benefits for the athletes.

Sanders’ son quarterback Shedeur Sanders has also added to the excitement at Jackson State, which has included NIL (name, image and likeness endorsement deals for the football players.

However, Sanders is not the only high-profile coach that has increased the buzz surrounding HBCU athletic departments.

Former Houston Oilers defensive back Bubba McDowell serves as the head coach of the Prairie View A&M University program in Prairie View, Texas, which is north of Houston.

Ex-Raiders head coach Hue Jackson leads the football program at storied Grambling State University, which is arguably the most historic HBCU football program of all time due to the legendary coaching career of the late Eddie Robinson and stars like former quarterback Doug Williams.

The former Grambling State quarterback became the first Black quarterback to lead an NFL team, which is now known as the Washington Commanders, to a Super Bowl victory.

Even HBCU basketball programs have benefitted from the buzz that comes from hiring high profile head coaches.

While college basketball does not generate the income that college football does, regardless of if it is an HBCU or PWI, HBCU basketball programs have benefitted from the increased exposure that their teams have received.

For the 2023 NBA All-Star HBCU game, rivals Southern and Grambling State will face each other in Salt Lake City.