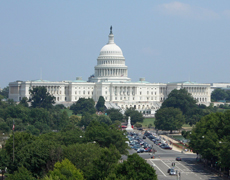 If Georgia Democrats can win Senate runoffs, the United States Senate will have an even 50-50 split, with Vice President-elect Kamala Harris providing the tie-breaking vote.

The tumultuous 2020 elections have not ended.

But the balance of power in the Senate still rests with the Peach State as the Rev. Raphael Warnock battles Sen. Stacey Loeffler (R-Ga.) in a runoff election for a United States Senate seat.

The election of President-elect Biden will mean more to Democrats, obviously, if they can even out power in the Senate, with Vice-President-elect Kamala Harris providing the tiebreaker on potential bills.

Therefore, progressives in Georgia have to make sure they turn out their base for the runoff.

If not, a Republican-led Senate could stifle any legislation that a Biden administration intends to enact.

But, as the 2020 election proved, party affiliation does not always matter with many voters willing to split their ticket in order to ensure checks and balances between the branches of government.

As a result, Sen. Loeffler and Rev. Warnock will have to rely more on platform than party to enter, or remain in, the U.S. Senate.

Therefore, RegalMag.com will take a look at both candidates, their backgrounds and where they stand on the issues to help readers make a more informed decision.

According to his campaign website, Warnock’s parents taught him and his 11 siblings the value of love and faith despite not having much money.

While growing up in Kayton Homes, the Warnock children also learned the value of hard work.

Warnock’s father was a veteran, owned a small business and also served as a preacher.

The family patriarch spent the weekdays hauling old automobiles to steel yards, while spending his Sundays in the pulpit, preaching the Word of God.

His mother grew up in Waycross, Ga., picking tobacco and cotton.

She still lives in Savannah, Ga. to this day.

Before receiving the call to preach, Warnock attended Morehouse College in Atlanta with the help of low-interest loans and the Pell Grant.

He eventually earned a Ph.D.

His childhood financial struggles have impacted his platform as an aspiring U.S. senator.

Warnock wants to bring to Washington the cares and concerns of the disadvantaged community in Georgia.

The pastor wants to fight for the dignity of the working class, which he believes is often overlooked by Washington in favor of those on Wall Street.

Furthermore, he wants to fight for quality health care and prison reform.

According to WarnockforGeorgia.com, he “believes that it is morally wrong and economically backward to close the doors of social re-entry on the formerly incarcerated. That’s why he has worked with Fulton County officials to expunge arrest records for those arrested but not convicted of a crime.

“He understands that arrests, even for minor infractions, can devastate generations of Georgians when parents and children are stripped of their potential for upward mobility. Reverend Warnock believes that people who have paid their debt to society in prison can continue to make contributions in their community after they have served their time.”

Although Warnock became the first in his immediate family to graduate college, on what he calls a full-faith scholarship because he never knew where his tuition money would come from, he believes it takes more than grit and determination to address the educational crisis in this country.

He wants to support robust Pre-K programs so that all students, regardless of socioeconomic background, can get a head start on education.

The Morehouse alum wants to invest in teachers so that they can have the resources to train the next generation.

His opponent, Loeffler, does not have any specifics on her website that details her plans for prison reform or education reform.

However, Loeffler does want to address health care if re-elected to the Senate.

According to KellyforSenate.com, “Like you, Kelly Loeffler knows that we need accessible, affordable healthcare in Georgia. On the HELP Committee, Kelly will partner with…President (Donald Trump) to lower prescription drug prices, end surprise medical bills, and help put people ahead of the special interests. Like Governor (Brian) Kemp, Kelly wants to ensure a better, brighter, and healthier future for our state.”

Now that President Donald Trump has lost the 2020 election, it remains to be seen whether or not Loeffler wants to work with Biden on his healthcare plans.

Loeffler credits conservative values with creating a good economy in the Peach State.

Her website states, “Thanks to bold conservative leadership on the state and federal level, our unemployment rate in Georgia—and throughout the country—is at historic lows. Our economy is growing and American families are finally seeing growth in their 401Ks.

“As a businesswoman and political outsider, Kelly is working in Washington to advance pro-growth policies that keep our state and country moving in the right direction. She is proud to champion President’s Trump economic agenda to Keep America Great!”

On her website, Loeffler is described as a businesswoman and a lifelong Republican.

She calls herself a political outsider who has used her position in the U.S. Senate “to spur economic growth, crackdown on illegal immigration, champion fair trade deals, protect farmers, and keep our families safe.”

As a co-owner of the WNBA’s Atlanta Dream, Loeffler caused a controversy amongst players with her stance on the Black Lives Matter movement.

Loeffler wrote an open letter to WNBA commissioner Cathy Englebert in July expressing her displeasure with the league’s support of Black Lives Matter.

Players from the Dream believed that Loeffler was using them as political foils to drum up support from conservative Georgians.

Members of the Dream even wore “Vote Warnock” t-shirts despite the fact that Loeffler co-owns the team.

That support from WNBA players catapulted Warnock from pulling single digits in the polls to pulling 32.9 percent of the vote on Nov. 3.

Loeffler became the Senator from Georgia when Gov. Kemp appointed her to fill a vacant seat in 2019.