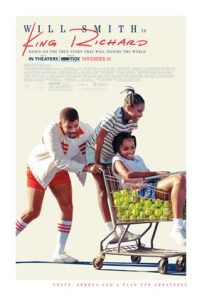 Well, it is that time of year again to release RegalMag.com’s 10 favorite movies of the year.

In 2021, the RegalMag.com staff gravitated towards movies that run the gamut of genres from superhero movies to musicals to biopics to concert documentaries.

While these movies represent RegalMag.com’s favorite films of 2021, the list does not necessarily represent all the movies that the magazine thinks deserve recognition or awards.

For example, the movie “Dune” definitely ranks at the top of the best movies released in 2021.

Just from a visual standpoint, “Dune” represents greatness and RegalMag.com cannot wait until the sequel to “Dune” drops in the future.

But this is just Regal’s favorites in no particular order.

“Summer of Soul”—Period, point blank, some of the best urban music of all time came out in the late 1960s and early 1970s. From Stevie Wonder to Gladys Knight and the Pips to Sly and the Family Stone, R&B music was on fire in 1969. All that fire got captured in the concert documentary “Summer of Soul,” produced by Questlove of The Roots. In a smart move, a soundtrack to the documentary will drop in January.

“King Richard”—Will Smith might finally get his Academy Award for his portrayal of Serena and Venus Williams’ father, Richard Williams. The movie showed how the determination of forward-thinking parents can help talented children overcome any obstacle put in their paths. But for some reason, some social media attention seekers did not like how “King Richard” focused on a great father and not his talented daughters. News flash. Without Richard’s guidance, would we ever have heard of his daughters or would the streets of Compton, Calif. have taken them from us before realizing their greatness?

“Stillwater”—While on movies that depict strong fathers, Matt Damon showed his fatherly love in the movie “Stillwater,” which is eerily like the true-life story of Amanda Knox. While the true story of “King Richard” deals with a father doing anything and everything to keep their daughters out of trouble, “Stillwater” depicts the father who will do anything to help his daughter once she finds herself in serious trouble.

“National Champions”—The timing for “National Champions” is perfect considering the college football playoffs begin today. But no matter how popular and lucrative college sports becomes, it is not without controversy from players not getting paid for actually playing the sport to players now choosing smaller schools instead of the big-budget blue bloods from the Power Five conferences.

“American Underdog”—While on the subject of sports films, “American Underdog” must get some love from Regal because it represents the other side of the coin of the sports business. For as much criticism that college sports receives because of its business model, sports can become a microcosm of life when it comes to realizing one’s dreams. “American Underdog” shows what can happen when people never give up on their dreams, and when they have someone in their lives who gives them unconditional support and encouragement.

“Being the Ricardos”—Nicole Kidman will definitely get an Oscar nomination for her portrayal of Lucille Ball in “Being the Ricardos.” Additionally, Javier Bardem should receive one as well for his portrayal of Desi Arnaz. “Being the Ricardos” has great writing, great acting (even from supporting stars like J.K. Simmons) and a great storyline. The movie shows how one allegation, or two, could have changed the course of television history for some of the biggest TV stars of all time.

“West Side Story”—Critics have predicted that Rita Moreno will receive an Oscar nomination for her role in “West Side Story,” directed by the great Steven Spielberg. But despite the star power involved, “West Side Story” resonates because the class and racial tension that caused the strife in this period piece still permeates throughout America many decades later. Throw in an interracial love story in the mix and you have a powder keg ready to explode.

“Shang-Chi and the Legend of the Ten Rings”—While “Spider-Man: No Way Home” might be the consensus best Marvel film of 2021, “Shang-Chi and the Legend of the Ten Rings” receives that distinction from RegalMag.com. In the movie, Shaun/Shang-Chi (Simu Liu), a master of weapons-based martial arts must confront his buried past when he becomes a part of the Ten Rings organization. With the success of the movie, Marvel has another franchise with the sequel coming soon. Having Awkwafina will definitely help the franchise with her comedic timing.

“The Last Duel”—If the ID channel existed centuries ago, the stories might have looked like the film “The Last Duel” starring Matt Damon, Ben Affleck, Jodie Comer and Adam Driver. A man has a beautiful wife. Another man tries to make a pass at his wife. The woman does or does not accept those advances. She tells her husband the man tried to rape her and that she did not consent to his advances. Violence ensues. But instead of waiting outside in the bushes to kill someone like many do in 2021, those old school beefs often included a duel to the death.