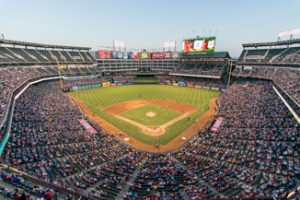 Kumar Rocker will not play in Globe Life Park (now Choctaw Stadium), the old home of the Texas Rangers. But the pitcher might one day play nearby at Globe Life Stadium.

For one night during the 2022 Major League Baseball (MLB) First Year Player Draft, the clock turned back to the days of yesteryear when MLB boasted of countless Black American superstars.

But what happened to Black American talent?

Many have suggested that youth baseball has priced out many young Black American athletes.

Others have stated that shows like ESPN’s “Sportscenter,” “NFL Live” and “NBA Today” have made basketball and football more popular choices with their highlight reel plays.

And even more have suggested that baseball has become too boring for the younger generation to embrace.

Whatever the reasoning behind the dwindling numbers, the dearth of Black American baseball stars took a back seat during the 2022 Major League Baseball Draft.

On July 17, four of the first five draft picks in the first round were Black Americans.

After the Baltimore Orioles selected Jackson Holiday (son of former baseball star Matt Holiday) out of Stillwater High School in Oklahoma as the first overall pick in the draft, the next four players selected were all Black Americans.

RegalMag.com looks at the four draft picks to see what the analysts have to say about their prospects.