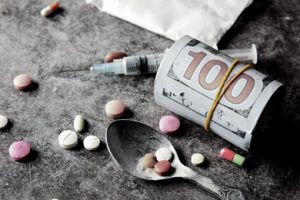 The use of fentanyl in street drugs has contributed to an increase in drug overdoses.

A troubling trend has surfaced in the Black community, with Black drug overdoses surpassing the overdose rates in the White community.

On March 3, the JAMA Psychiatry journal released a peer-reviewed study that stated the overdose rate for Black Americans surpassed that of their White counterparts for the first time since 1999.

“Overdose rates have been growing fastest among Black communities. For the first time we see them overtaking the overdose rates among White individuals,” said Joseph Friedman, who researches addictions at UCLA.

What’s more troubling for the Black community is that 10 years earlier in 2010, White overdose rates doubled that of their Black counterparts.

Blacks have died at higher rates from overdoses since 2012.

Friedman, who co-authored the study, reported the drugs are now more toxic, which contributes to a worsening overdose problem.

NPR reported, “That’s because of fentanyl, the potent synthetic opioid, which Mexican drug cartels now mix into many of the street drugs sold in the U.S.

“Fentanyl has made drug use far deadlier for all Americans, across all demographics.

“But this new study suggest African Americans are more vulnerable because they often rely on illicit drug supplies that are even m0re at-risk.”

The Grio reported, “NPR noted that fentanyl has contributed to that higher toxicity. The Drug Enforcement Agency says that since fentanyl is cheap and potent, drug dealers mix it with other illicit drugs like cocaine and heroin, increasing the risk of death.

“Fentanyl is meant to treat chronic pain or pain following surgery and is about 100 times more powerful than morphine, the DEA said.”

The researchers who authored the study believe that deaths from drug overdoses have become a racial justice issue.

Hansen said, “People who are lower down on the social hierarchy tend to be exposed to fentanyl and other highly potent synthetic opioids at disproportionate rates.”

Because of this, Hansen added, “You find Black Americans are exposed to fentanyl more often than White Americans.”

Furthermore, Black Americans face arrests and incarcerations at a higher rate than their White counterparts.

As a result, Black Americans have fewer opportunities to get clean and overcome their addictions.

Hansen said, “We have in this country two tiers, a criminalized tier which still over-polices and over-arrests and over-incarcerates Black and Brown Americans. And then we have a medicalized tier,” which many White addicts have access to in comparison to their minority counterparts.

Adding insult to injury, a study in the Lancet medical journal predicts more than 1.2 million overdose deaths in the next decade.

Dr. Stephen Taylor of the American Society of Addiction Medicine believes that Black Americans might bear the brunt of the next chapter in the opioid crisis.

Taylor said, “As a member of the Black community and as an addiction treatment specialist…I’m terrified of that prospect, but that’s exactly what we could be facing. A larger percentage of this next million [deaths] will be Black and other people of color.”

He said the way to stop this dire prediction for the Black community revolves around providing better health care in addition to providing more access to addiction treatment.

Taylor added, “All of this needs to be done with a real sense of urgency.”

Mass media has profiled the impact of opioid use at length over the last few years.

Therefore, the harsh impact that the drug has might deter illegal drug use.

Tara Law of Time Magazine reported, “When combined with other drugs, opioids are proving particularly deadly for Black Americans, finds a new study published in the American Journal of Epidemiology. Overdose deaths that involved more than one substance increased dramatically between 2007 and 2019, but rose far more quickly for Black Americans than Whites. Among Black Americans, the number of deaths from opioids with cocaine during this period rose 575%–up from 0.6 deaths to 4.05 deaths per 100,000 people—while among White people, the death rate rose 184% from 0.49 to 1.39 deaths per 100,000 people.”

Tarlise Townsend, the joint lead author of the study and researcher in the population health department at New York University said, “People are increasingly dying from stimulants, cocaine, meth, and other stimulant drugs largely, but not entirely, driven by fentanyl contamination of stimulants. We’re now at this point where many experts advocate that people who use drugs assume fentanyl is in anything they’re using.”

Townsend added, “What we found in this study was really, really alarming. Not only are stimulant-opioid overdose deaths increasing very rapidly in this country, but they are disproportionately affecting people from marginalized racial and ethnic groups, and particularly Black Americans.”