Film Review: What’s Not to Love About ‘Sylvie’s Love’? 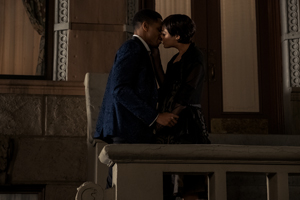 Nothing But Love for ‘Sylvie’s Love’

Back in the day when Hollywood would release a “Black film,” the industry often focused on some tale of racism or poverty as if those two misfortunes captured the entirety of Black life.

But over the last few years, Hollywood has started to get it right with everyday tales of life, adversity and love in pictures that happen to feature a Black cast and Black crew.

“Sylvie’s Love” continues that momentum in a beautiful, smooth and sophisticated story of lost love and lost opportunity in a way that is reminiscent of “The Notebook” and “La La Land.”

The spot is New York City.

At a time in which jazz and blues music still rule the urban radio airwaves, making it as a true instrumentalist remained the dream for many aspiring musicians.

Therefore, Robert (former NFL star Nnamdi Asomugha) leaves the automotive plants of Detroit and heads out to try his luck in the “Big Apple” for just one summer.

Although the band (Dickey Brewster Quartet) that Robert is in has a steady gig at the club the Blue Morocco, it is not quite enough to make ends meet in expensive New York.

As a result, he takes a job at a record store to augment his income over the summer.

Despite the fact that the record store gig will allow him to make some extra money and still be around music, the job offers him a chance at his true goal.

The record store has a help wanted sign in the window.

However, the sign is just for image purposes because Tessa’s mother Eunice (Erica Gimpel) does not want the high society of New York to think that her daughter has to work in Herbert’s struggling record store.

Eunice owns an etiquette school and the family belongs to New York’s talented tenth within the Black community, and appearing to need money from the record store would damage their image.

Despite not really looking for a record store employee, Herbert takes an immediate liking to Robert and hires him on the spot.

In “Sylvie’s Love,” Robert and Sylvie eventually form a bond despite the fact that Sylvie has a fiancé in Korea.

While Herbert likes Robert, Eunice is not that impressed with the struggling musician from Detroit and does not like the fact that her daughter has been spending so much time with him, especially since she has a fiancé overseas.

Like in “The Notebook,” Robert does not come from the same “station in life” or socioeconomic class, and Eunice believes that if Sylvie hooks up with him it will be a black eye or at least a step backwards for the family.

But Robert is downtown.

When Eunice asks Robert if he had studied music at a conservatory, he replies that he was self-taught, which obviously does not impress the uppity Eunice.

Nevertheless, Sylvie and Robert share a connection that outweighs their class differences.

Like in “La La Land,” Sylvie and Robert share a love for making it in the entertainment business, which was much more far fetched in the late 1950s than in the current era that “La La Land” was based.

Although the entertainment business does not have many African-American women, or women period, working behind the scenes, Sylvie dreams of one day becoming a television producer.

Unfortunately, she lives in an era in which many women still do not work outside of the home let alone produce entire television shows.

Robert is obviously a dreamer too.

And when he has to leave after his summer in New York City, like when Noah (Ryan Gosling) had to leave Allie (Rachel McAdams) in “The Notebook,” will love return or will what they had simply be a summer fling?

“Sylvie’s Love” is also another love story that can rival “Love Jones” and “The Photograph” in its effortless cool.

There is something that true artistry like musicianship; photography and other creative arts bring to the ambiance of a love story on film.

Plus, throw in the fact that “Sylvie’s Love” is a period piece taking place in an era in which dressing up showed an artist’s status in the entertainment business rather than the current era in which many artists want to copy the styles of the inner city.

But equally as important as romantic love, “Sylvie’s Love” is about chasing all of one’s loves in life, from the personal to the professional.

Sylvie came up in a time in which women might not have been taken seriously in the workplace or even in the home.

The movie “Sylvie’s Love” takes place pre-women’s lib, so for a woman to be so confident in her own abilities and dreams, refusing to be deterred by naysayers speaks volumes about her love for her dream profession.

Furthermore, “Sylvie’s Love” chronicles the love one has for family and the willingness to have dreams deferred in order to do what’s best for loved-ones.

Additionally, the acting in “Sylvie’s Love” is just enough.

Thompson and Asomugha’s subdued, by loving, performances are just what the doctor ordered for a jazz film set in the late 1950s to early 1960s.

Slowly but surely, Asomugha is making a name for himself in Hollywood after an All-Pro career in the NFL.

He does not try to do too much in any of his performances.

The former shutdown cornerback just stays in his lane and has become a serious actor, not like the action movie stars that Jim Brown, Fred Williamson and O.J. Simpson became after the conclusion of their football careers.

Brown and Williamson made a name for themselves in Blaxploitation films fighting the man and doing good for the hood.