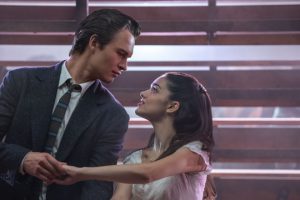 “West Side Story,” the classic love tale loosely based off of William Shakespeare’s “Romeo and Juliet,” deals with some of the same taboos and stereotypes that have existed since the beginning of time.

In touching on those taboos, Steven Spielberg’s version of “West Side Story” presents a cute and fun musical that becomes complicated, tragic and heartbreaking because of the biases that exist in the world, which prevent us from seeing the humanity in our brothers and sisters of another color.

In “West Side Story,” Tony (Ansel Elgort, “Baby Driver”) desperately wants to change his life despite living in the same rough environment that got him sent away to prison for a year.

In his New York City neighborhood, many people still see him as a leader even though he wants to distance himself from his past as much as possible.

He is still on probation for nearly beating a kid to death and cannot keep the same company that led to that fateful fight let alone get into any more trouble.

However, Tony’s legal predicament does not stop his old friends from the Jets like Riff (Mike Faist) from trying to recruit him to return to the old street gang.

The Jets, a gang of poor White kids, do not like the direction that their neighborhood is going.

Old affordable apartment buildings in their neighborhood have gotten torn down with hopes of replacing them with high end apartments for the upper class.

In “West Side Story,” parts of The Jets territory have gotten taken over by Puerto Rican migrants who want a more profitable life in New York City.

Old businesses that once had White owners, now have Puerto Rican owners.

Upset about the darkening of their once predominantly White neighborhood, the Jets create mischief in the neighborhood by harassing the Latino business owners and defacing murals that highlight the Puerto Rican flag.

The defacing of a Puerto Rican flag mural seems like the last straw to many of the Puerto Rican residents of the neighborhood.

The Jets desperately want to rumble, or fight, with their Puerto Rican counterparts, the Sharks.

But, law enforcement, who seem to be more deferential to the Jets than the Sharks, prevent the two gangs from engaging in all out combat over territory in their ever-changing New York neighborhood.

Nevertheless, the Jets and the Sharks do agree to meet at the upcoming school dance to at least talk about a rumble or brawl for it all.

Like in many neighborhoods and schools, to this day, the dance appears totally segregated in the sense that the White children stick with people from their own community while the Puerto Rican youngsters do the same thing.

Even when school officials try to get the two groups to intermingle in “West Side Story,” they all gravitate back to their side of the gymnasium.

That is until Tony, a young White male, lays eyes on Maria (Rachel Zegler), a young 18-year-old Puerto Rican female.

Although Maria comes with a date, a friend of her brother who meets the family’s approval, that does not stop Tony and Maria from finding time to spend together.

The smitten young people find enough privacy behind some bleachers to steal a dance and a kiss away from the unapproving eyes of their peers.

However, when Rachel’s boxing brother and Sharks leader Bernardo (David Alvarez) finds his beautiful Puerto Rican sister kissing and dancing with a White boy, all you know what breaks loose between the two groups who did not like each other in the first place.

There is no way that Bernardo can allow one of the local White boys, especially one from a rival gang, to take his sister out without a fight.

Furthermore, there is no way that Tony will let anyone keep him away from the possible love of his life in Maria without a fight either.

“West Side Story” drags a little at the beginning setting up the beef between the Jets and the Sharks.

However, once “West Side Story” gets going it rivals the fun and cuteness of “In the Heights.”

The relationship between Tony and Maria might be one of the most complicated in movie history.

To go through what that young couple went through in their brief courtship and for the love to continue is both inspiring and heartbreaking at the same time.

The dancing in the musical “West Side Story” is amusing and light.

Unfortunately, the singing in the musical “West Side Story” comes across as uneven.

The ladies handle their own vocally.

However, their male counterparts struggle to keep up vocally.

While dubbed a musical, the vocals in “West Side Story” are not always good enough to fit that description, much like the uneven singing in “La La Land.”

But like “La La Land,” the mediocre singing at times does not take away from the movie much because of its relatability.

In “La La Land,” many people can relate to laying it all on the line to pursue their dreams and wondering if they made life-altering mistakes along the way.

In “West Side Story,” many will relate to meeting the person of their dreams, only not to have that person fully accepted by their family, friends and loved-ones.

Sometimes, people’s own ignorance and bias prevent them from achieving true happiness and harmony in life.

And as “West Side Story” unfortunately shows that ignorance is still just as prevalent today as it was yesterday.