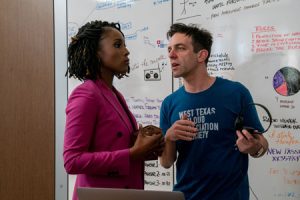 “Vengeance” must rank at the top of all films ever based in Texas.

It is that good.

If it does not rank at the top of that proverbial limestone hill in the Texas Hill Country better known as Texas’ Movie Mt. Rushmore, it must rank in the top five, period, point blank.

Like many places in the South, Texas has always gotten caricatured and stereotyped by Hollywood productions.

But despite a lot of previous Hollywood misses, “Vengeance” gets it just right.

The movie does not ignore Texas’ stereotypical eccentricities and sometimes backwards politics.

But it does not slip into the bad accents and total unrealistic vibes of some of its predecessors.

Although the 1994 Houston-based film “Jason’s Lyric” is one of the best films ever based in Texas, the accents (namely by actor Allen Payne) still bother true Houstonians to this day because many Houstonians do not know anyone from that H-Town that talks like Payne’s character, Jason.

Fortunately, “Vengeance” does not make a mockery of the Lone Star State, instead portraying some of the best qualities of Texans, while not forgiving them for their faults.

Ben has a great job as a journalist for the New Yorker magazine.

He has even ventured into podcasting, a necessity for any serious journalist in the 21st century.

Most importantly, Ben is truly enjoying the single life, 100 percent.

In “Vengeance,” Ben loves to say “100 percent” when he is in total agreement with someone or something.

When a man is single with some money in his pockets and not a total eyesore, he will succeed with the ladies, especially in a city as big as New York.

As a result, Ben takes advantage of hook up culture, hooking up a lot with random women that he has no emotional connection with.

In “Vengeance,” Ben often does not even remember the women that he has hooked up with.

He saves their phone number under names or traits that will help him remember them should they call.

However, Ben assumes that many of the women he hooks up with are also in it just for the hook up, and not to settle down and eventually get hitched.

As a result, when Ben receives a phone call from a private number informing him that his girlfriend has died in Texas, he has no idea what the heck is going on.

Ben must desperately check his social media to even vaguely remember the dead girl.

As a matter of fact, Ben has another woman in his bed when he gets the news about his dead “girlfriend” Abilene (Abby for short).

Although Ben tries to weasel out of the phone call, when Ty (Boyd Holbrook) tells him that he must attend the funeral and that the family will foot the bill, Ben reluctantly takes the trip to middle of nowhere Texas to lay the “love of his life” to rest.

When Ben asks Ty if the funeral is in Dallas, Ty responds that Dallas is not Texas.

When Ben asks Ty if the funeral is in Houston, Ty responds that Houston is another country.

However, the rural area that Abilene came from before pursuing a musical career in New York is the real and true Texas, according to those who inhabit the rural and conservative parts of the Lone Star State.

In “Vengeance,” Ben’s intentions are to lay Abilene to rest in rural Texas and quickly return the “Big Apple.”

But when Ty informs him that he does not believe that Abilene died because of her own actions, Ben finds a reason to stay for a little while longer.

Ty believes that Abilene was murdered, and Ben sees this as a storyline that will take his podcasting career to the next level.

Let’s just say that Ben gets more than he bargains for as he gets to know the family and the townspeople of rural Texas.

In “Vengeance,” filmmaker/actor Novak injects the right amount of comedy, quirkiness, drama, heart, intrigue and plot twists to cover the bases necessary to rank the film high on the list of Texas films.

When Ty tells Ben that he calls his much younger brother El Stupido (Eli Bickel), Ty tells Ben it will not hurt his feelings because his brother does not speak Spanish.

Ben soon finds out why Texans are so enamored with the fast-food chain, Whataburger.

No matter where a person goes in Texas, Whataburger is always right there.

Audiences will fall in love with Abilene’s crazy family in “Vengeance.”

However, they will not be the only characters to intrigue audiences.

Novak finds a way to utilize the greatness of Issa Rae even though a Texas film might not be something her fans would expect from her.

However, her role as Eloise allows her to stay true to herself even though she seems like the outcast when it comes to the cast.

Think of Rae’s performance in “The Photograph” because in that film set deep in the South, Rae still comes off as the big city slicker amongst the rural folks.

But the most intriguing character of the bunch is record producer Quentin Sellers, portrayed by Ashton Kutcher.

In “Vengeance,” Quentin is still a true rural Texan.

But he has more sophistication and elegance than his more country counterparts in the town.

In “Vengeance,” Kutcher’s performance is the epitome of why the film should rank so high in the canon of Texas films.

But, like most of the South, it is way more sophisticated and slicker than it is given credit for.