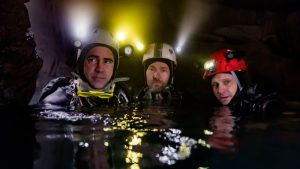 In a divided world, remembering a more united time could possibly make a world of difference.

Unfortunately, it often takes tragedy for the world, or a country, to come together despite differences and disagreements.

The Ron Howard-directed “Thirteen Lives” is an extremely well-made and well-shot reminder of what can happen when the world unites behind a common cause and common mission.

The problem with movies like “Thirteen Lives” is that many people who watch the news regularly will know what happens before entering the theater.

So, to captivate audiences who know the outcome of the film before watching it epitomizes what great filmmaking can accomplish.

“Thirteen Lives” chronicles a young soccer team, and their coach, who get trapped in a tourist cave when the rainy season begins earlier than expected.

On the day the team gets trapped in the cave, they all plan to attend the birthday party of one of their teammates.

When the team does not arrive at the party on time, their parents begin looking for them, eventually discovering that the team is trapped in a cave as flood waters begin to rise.

Unfortunately, the monsoon that is inundating Thailand and the layout of the cave makes it almost impossible for local groups like the Navy SEALS to get the boys out safely.

As a result, it becomes necessary for all the best divers from around the world to come to Thailand and attempt the almost suicide mission of getting the boys out, which would be a difficult mission even for the best divers and swimmers if they suddenly got trapped in a cave.

In ‘Thirteen Lives,” Howard makes sure that audiences feel a part of the ordeal with the way he shoots the film.

“Thirteen Lives” chronicles the number of days the young soccer team and their coach are trapped in the cave.

Furthermore, “Thirteen Lives” pinpoints the distance that rescuers are from the entrance of the cave, displaying maps of the cave showing what it would take to rescue the boys and their coach.

Additionally, when divers eventually find the boys, “Thirteen Lives” pinpoints the distance the trapped boys and their coach are from the entrance of the cave.

And in defense of “Thirteen Lives,” it does contain some secrets to the rescue that might not have made it to mainstream news.

In fact, the rescue became so controversial that some of the facts were kept away from the parents because if they had known what the rescue required, it might have caused some apprehension, which might have made the story more catastrophic.

The cave scenes in “Thirteen Lives” are brilliantly shot, especially the underwater scenes.

But it is the resiliency of the people involved in the rescue mission that makes the film stand out, and obviously gives it its heart.

“Thirteen Lives” does not sugar coat anything.

Although people from all over the world traveled to Thailand to rescue the boys, some did not think a rescue mission was possible.

Some thought it would ultimately become a recovery mission because how could divers get the boys out of the cave when they had to transport them under water for such long periods of time because of the flooding?

Even a father comes to the realization that if he cannot have his boy back, he at least wants them to bring him his body.

But despite the dire circumstances, “Thirteen Lives” shows how strong the will to live is and how people can put their own desires aside in order to help those who find themselves in a seemingly helpless situation.

Furthermore, “Thirteen Lives” does a tremendous job weaving in Thai culture with the religious beliefs of many of the citizens and outsiders who might be unaccustomed to the Thai way of life.

Actually, nothing bad can be said about “Thirteen Lives” except for the fact that people who follow the news will know the outcome of the story.

But the actors make up for the predictability in every way possible.

The looks of anguish on the parents of the missing boys could be felt even if “Thirteen Lives” was a silent film from a century ago.

The trepidation of the rescuers and the government officials in Thailand can be equally felt because who in their right mind wants to be the person responsible for letting the boys succumb to their fate?

In that sense, “Thirteen Lives” could have spent more time detailing how the coach kept the boys safe and kept their minds in the right place throughout the lengthy ordeal.

Veteran actors Viggo Mortensen, Colin Farrell (“The Gentlemen”) and Joel Edgerton (“Loving”) stand out as to be expected.

However, it is Farrell’s character John Volanthen that stands out the most in “Thirteen Lives” because he has a son of his own about the same age as the trapped soccer players.

True heroism is putting yourself in danger to save someone else’s children knowing that your mission might make your own son fatherless.

But while the rescuers and government officials got much of the media attention as to be expected, “Thirteen Lives” gives much-deserved shine to the regular citizens of Thailand, like the farmers, who made sacrifices that were just as important as those in the spotlight.

And that type of unsung heroism is what the world needs now the most.

The people that one would think would unite the world might do more to divide the world.

Nevertheless, the unsung heroes that do not have titles and leadership position, or even a dog in the race, might be the ones to help the world win some much-needed togetherness.