Film Review: ‘The Tragedy of Macbeth’ Dull Despite Denzel, McDormand 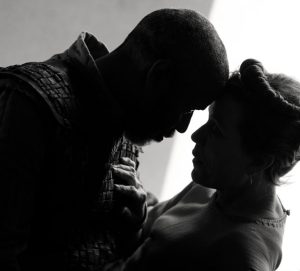 Denzel Washington and Frances McDormand star in “The Tragedy of Macbeth” coming soon to theaters and Apple TV+.

The great William Shakespeare might be turning over in his grave with Apple TV+’s version of “The Tragedy of Macbeth.”

Hell, to paraphrase the great words of the illustrious Charles Barkley, Winston Shakespeare (Taye Diggs) from “How Stella Got Her Groove Back” is turning over in his grave too and he ain’t even dead.

Despite the greatness of Denzel Washington and Frances McDormand, “The Tragedy of Macbeth” is still dull and still a dud that needs Cliff’s Notes despite their talents.

A better adaptation of a Shakespeare’s play is Martin Lawrence rendition of “Romeo and Juliet” on the “Martin” sitcom.

Lawrence called his reinterpretation of the Shakespeare classic “Homeo and Juliet.”

The comedian presented it as a family affair like The Jacksons.

Lawrence was Michael Jackson, the star.

Gina was Janet Jackson if she was nasty.

Tommy and Cole were Jermaine and Jackie Jackson.

And Pam was Toto (not Tito Jackson), the family pit bull.

To be fair, “The Tragedy of Macbeth” has its cool qualities, specifically its minimalist approach and black-and-white visuals.

But that is not enough to compete with the standout films coming out over the Christmas holiday season.

If fans know anything about Washington’s early years, then they probably will understand what drew him to the character of Macbeth.

After struggling in college and not having much success in the workforce, a prophetess at his mother’s beauty parlor told him that he would go on and make a huge mark on the world.

As a struggling college student, Washington probably thought the woman was crazy because how would someone put such a prophesy on his life when he had nothing going for himself at the time?

Well, the prophetess that spoke over Washington’s life was totally right because Washington is arguably one of the best actors of all-time.

He even has shined as a director.

Check out “A Journal for Jordan” over the holiday season if you have time.

But the prophesy that a witch spoke over Macbeth’s life did not go as smoothly as the prophesy over Washington’s actual life.

In “The Tragedy of Macbeth,” Macbeth (Washington, “The Equalizer 2”) receives the prophesy that he will become king of Scotland one day.

With the motivation of his wife Lady Macbeth (McDormand, “Hail, Caesar!”), Macbeth does whatever he feels is necessary to assume the crown.

It does not matter to Macbeth if it is murder or mayhem, he will do whatever is necessary to make the ascension to royalty.

But once he accomplishes his sinister plot of becoming king of Scotland, he must become even more sinister to keep the power.

Although many scholars believe the play “The Tragedy of Macbeth” was first performed in 1606, the cautionary tale of doing whatever it takes to assume power still resonates in 2021 and beyond.

A wise man once said that absolute power corrupts absolutely.

In “The Tragedy of Macbeth,” that is certainly the case for the titular character.

Throughout the world, in the fields of business and politics, the world is reminded of this cautionary tale almost daily.

Businesspeople will often sell their soul for more money.

Many businesspeople will even put others in danger just to help their bottom line.

The same reality exists in politics where leaders will sell their soul to those financially backing their candidacy.

Even worse, politicians will even destroy the very government they work for to stay in power.

From America to Russia and beyond, regular folks exist under the rule of would-be dictators that will do anything that extends their power and reach.

While the way people speak might have changed in the centuries since Shakespeare blessed the world with his timeless messages, the morals of the story still ring true, for better or worse.

But therein lays the problem for any Shakespearean adaptation in 2021 or 2022.

Will the younger generation gravitate towards a movie in English if they darn near need subtitles?

Even someone, such as this movie critic, with a literary background thanks to his degree in English (which required him to take a course called Shakespeare) had difficulty deciphering the language of “The Tragedy of Macbeth.”

But the old school lingo of “The Tragedy of Macbeth” cannot take away from the greatness of the actors involved.

Even the younger generation of stars hold their own against the great Washington and McDormand.

Actor Cory Hawkins (“Straight Outta Compton”) continues to show his acting range as Macduff in “The Tragedy of Macbeth.”

Hawkins did a great job as Dr. Dre in “Straight Outta Compton,” nailing the good doctor’s mannerisms and voice inflections.

He then went on to show his musical abilities and a softer side of his personality in “In the Heights.”

And his biggest challenge will be reprising the role of Harpo in the 2023 musical film version of “The Color Purple.”

While Harpo (Willard Pugh) did not have one of the biggest roles in the 1985 film like Oprah Winfrey, Danny Glover or Whoopi Goldberg, Pugh made the character one of the most popular characters from that movie.

Who could possibly say “this here my juke joint” better than Pugh?

Unfortunately, the great thespians are not enough to save “The Tragedy of Macbeth” from the depths of mediocrity.

Therefore, if you have time after watching all the great films of the 2021 Christmas movie season, check out “The Tragedy of Macbeth.”

The film hits theaters on Christmas day and will become available to Apple TV+ subscribers on Jan. 14, 2022.