Film Review: ‘The Many Saints of Newark’ Does Not Quite Fill Shoes, But Still Very, Very Cool 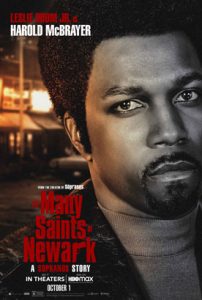 Following a legend can become a daunting a task.

Ask quarterback Cody Carlson how difficult it was to follow Warren Moon?

Furthermore, ask Eddie Murphy and Arsenio Hall how difficult it was to follow up with a sequel to “Coming to America?”

Nevertheless, all those follow-ups proved solid if not fantastic.

Likewise, “The Many Saints of Newark” does not quite capture the magic of the legendary HBO series, “The Sopranos.”

Nevertheless, “The Many Saints of Newark” is still a very cool prequel that boasts excellent casting and room for much more in the future.

Fans of “The Sopranos” know how Tony Soprano’s story ended.

But until “The Many Saints of Newark,” no one really knew how Tony’s mafioso career began and what led him to make the decision to pursue a career in organized crime when his dream was always to go to college then to the National Football League.

“The Many Saints of Newark” begins brilliantly with voices from the grave speaking out about that thing of theirs.

Tony’s nephew Christopher Moltisanti (Michael Imperiolli), who Tony whacked in “The Sopranos,” narrates “The Many Saints of Newark” and tells how his father Dickie Moltisanti’s (Alessandro Nivola) influence led young Teenage Tony (Michael Gandolfini) to a life of crime.

While throughout the years, organized crime families have gotten their illegal funds through different means depending on the era, the 1960s underworld revolved around illegal drugs and the numbers racket.

People in ghettoes across America like Harlem, N.Y. played the numbers, an illegal lottery that allowed gamblers to bet as little as a quarter on three numbers.

Then, if those numbers came up from the results at the horse track, that gambler multiplied their investment by a significant amount of money.

During the 1960s, and before, the Italian mafia ruled the underworld of New York City, Newark, N.J. and probably all points west and south.

Up until that time, many African-Americans went along with that arrangement out of fear, complacency or lack of knowledge or self-worth.

But that dynamic began to change immediately during the 1960s because of the Civil Rights Movement, Black Power movement and the Black is beautiful movement.

No longer would many African-Americans be content with being their White bosses house n***** as Harold MacBrayer’s (Leslie Odom Jr., “One Night in Miami”) wife Queen Isola (Patina Miller, “Power Book III: Raising Kanan”) calls him.

In “The Many Saints of Newark,” the DiMeo crime family has held a vice-like grip over the city of Newark, N.J. for years.

But the dynamics within the family and the race relations within the city of Newark, N.J., changes after one fateful night.

As a result, the power struggle threatens to destroy that thing of theirs as power grabs and old grudges begins to tear at the very fabric of the Newark, N.J. underworld.

In “The Many Saints of Newark,” all is as good as possible for an organized crime family.

The film begins as Dickie’s father “Hollywood Dick” Moltisanti (Ray Liotta) returns from the old country with a new wife young enough to be his daughter.

Almost immediately, the young bride who barely speaks English, causes some unspoken friction between Dickie and his father, “Hollywood Dick.”

Dickie’s father has a history of abusing the women in his life, including Dickie’s own mother.

Despite the friction, Dickie is just happy to have his father back in the States and have the family reunited like old times.

Dickie’s wife is unable to give him any children.

Nevertheless, Dickie has a nephew of sorts in Teenage Tony, who follows him around like a little duckling following the mother duck.

Despite Tony’s admiration for Dickie, people like Dickie’s own uncle advise Dickie to distance himself from the young man because everywhere Dickie goes, trouble seems to follow.

As a result, since Dickie has so much influence over Tony, if they continue to hang out with each other, it is only inevitable that Tony will make the same grave mistakes that Dickie has.

One of Dickie’s biggest mistakes is not seeing how the times are a changing.

In “The Many Saints of Newark,” Harold has been a close friend of Dickie’s since they played high school football with each other and the two have enjoyed a respectful working relationship with each other as adults.

Harold oversees collecting the numbers money from the African-American community in Newark, N.J.

And when the money comes up short, or someone is not making good on their debts, it is Harold’s responsibility to remedy the problem.

But when Harold has finally had enough of answering to the man in “The Many Saints of Newark,” Dickie might realize that every street person has a lot of the devil in them.

Furthermore, nobody in the underworld is that saintly.

First of all, “The Many Saints of Newark” does an excellent job of casting, especially the role of Teenage Tony.

Sure, young Gandolfini picks up the role that his father made famous.

However, just casting a person’s son in a role does not necessarily mean that the person is talented enough to nail their parent’s nuances.

Famously, Lil Eazy-E tried out for the role of his father Eazy-E in “Straight Outta Compton” but could not capture the emotional complexity of his father like Jason Mitchell could.

Additionally, “The Many Saints of Newark” allows Odom to spread his wings a little more after succeeding in good guy roles like Sam Cooke in “One Night in Miami.”

Fans of the show will enjoy the music of the day, like The Jackson 5’s “ABC” and performances by The Delfonics on “Soul Train.”

But the best musical number for fans of “The Sopranos” will come at the end of the film as the popular theme song for the HBO series plays during the closing credits.

But even with the greatness of “The Many Saints of Newark” and an ode to the past, it is hard to beat the best and “The Sopranos” was one of the best.

However, “The Many Saints of Newark” competes, and the film holds its own with a beloved classic.

“The Many Saints of Newark” receives a rating of 3.5 out of 4 crowns