Film Review: ‘The Last Duel’ Proves Theory of Three Sides to Every Story 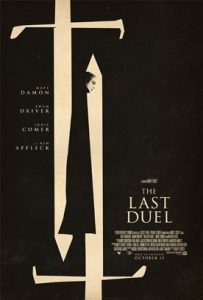 A wise man once said that countries fought wars over women.

One of the wisest men, Jay-Z, once said that Yoko Ono had to have that ill…if it caused the breakup of The Beatles.

Therefore, movie buffs should not find it surprising that a woman caused a battle to the death in “The Last Duel,” which stars some epic talent from Matt Damon to Ben Affleck to Adam Driver.

First and foremost, “The Last Duel” will take some time to watch.

But the length does not present a huge problem because “The Last Duel” is presented in the most realistic way a story can be presented.

As a matter of fact, another wise man once said that there are three sides to every story.

The other person’s side.

“The Last Duel” presents three sides to the story, making the audience sit through the same story three times from three different and distinct perspectives.

In “The Last Duel,” Sir Jean de Carrouges (Damon), finds himself in a precarious position.

He has fought valiantly for the king of France.

Carrouges has even saved the life of his fellow Frenchman, Jacques Le Gris (Driver).

Nevertheless, he has some enemies like the king’s cousin, Pierre d’Alencon (Affleck) because Carrouges does not always listen to his superiors while on the battlefield.

Although Carrouges has orders just to protect one of France’s bridges and not to advance on their enemies, he does the opposite when he sees the lives of others in danger.

When his comrades warn him that his adversaries are only baiting him into battle by threatening their hostages, Carrouges does not listen, putting many French soldiers in unnecessary danger.

Furthermore, Carrouges has more trouble than just his style on the battlefield.

The widower has also found himself in dire financial straits.

When Jacques Le Gris comes to collect some tax revenue on behalf of Pierre d’Alencon (Affleck), Carrouges struggles to make good on his debt.

Additionally, Carrouges has a problem with his lineage, or potential lack thereof.

His father is a French captain and Carrouges is next in line for the captaincy.

But a problem might arise because Carrouges does not have an heir to assume the captaincy once he meets his demise.

All Carrouges problems seem to disappear when he meets the lovely Marguerite (Jodie Comer) and asks her father for her hand in marriage and more.

Although Carrouges has 99 problems, a beautiful woman is not one to paraphrase that wise man, Jay-Z.

Brothers with bad women on their arms know that they must deal with suitors always trying to shoot their shot at their fair lady.

Therefore, it should not surprise men with beautiful women to see someone approach their women.

But what will run any man hot is if certain men try to pursue and seduce their women.

If a man’s friends or family members try to go behind his back to get at his woman, then he might as well have just walked up to that man and challenged him to a duel to the death because that disrespect is something worth fighting for.

And although the methods have changed from knocking on a woman’s door when her man is out of town to sliding into her DMs (direct messages on social media), the game has not changed that much in centuries.

In “The Last Duel,” Marguerite’s beauty makes Carrouges the envy of many men.

But one man gets as much attention from the opposite sex as Marguerite and that is Jacques Le Gris.

In “The Last Duel,” Marguerite even must admit to her gossiping girlfriends that she finds Jacques Le Gris attractive despite her marital status.

When Carrouges introduces his wife to his good friend Jacques Le Gris, he is immediately smitten.

Furthermore, when Carrouges leaves home to go to Paris to collect on some money he is owed, Jacques Le Gris seizes on the opportunity to have some alone time with the apple of his eye.

What follows is up to perspective.

Marguerite claims her interaction with Jacques Le Gris was rape.

Jacques Le Gris claimed that their interaction was consensual, and that Marguerite’s objection were the typical objections women make when men want sex.

And although he is initially hesitant, Carrouges believes his wife’s take on the ordeal and is determined to defend her honor.

Carrouges files charges against his former friend for allegedly raping his wife.

But in those medieval times, if a person brings a false claim to the court, it could result in loss of life for the plaintiff and the plaintiff’s loved-ones if the defendant is proven innocent.

Therefore, to defend Marguerite’s honor, Carrouges is willing to risk it all just because his wife said the interaction was not consensual.

“The Last Duel” is definitely a long movie, and a repetitive one.

But the repetition makes “The Last Duel” stand out because moviegoers get to see things from various vantage points before making their decision on who is being deceptive and who is being truthful.

The fighting scenes in “The Last Duel” are well-presented.

And the actors in “The Last Duel” seem to master the lingo of the era.

However, the lingo from those medieval times might dissuade some moviegoers because although “The Last Duel” is in English, many will not recognize the English, which is more like King James version of the Bible English.

And while no one can question the casting of “The Last Duel” with so many A-list actors, Affleck is almost unrecognizable at first with his bleached blonde hair.

The hair color was unnecessary and distracting at times.

But what was not distracting is the fighting, the hot-button issue of sexual assault and how far a man will go for a woman that he loves.

Sometimes, that woman is worth a duel to the death!

“The Last Duel” receives rating of three out of four crowns.