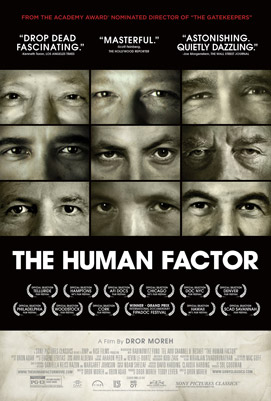 The beef in the Middle East between Palestinians and Israelis goes back to biblical times.

Israelis control parts of the Gaza Strip that Palestinians believe should become a part of their own sovereign state.

But Israeli leaders have struggled to come up with an agreement with the Arabs to help create a separate Palestinian state.

The documentary “The Human Factor” depicts the true art of the deal and the art of negotiation and how a lack of empathy prevents powerful world leaders from coming to a peaceful solution.

The brilliance of director Dror Moreh’s “The Human Factor” is the two-fold lesson moviegoers will receive.

The first lesson centers on the art of negotiation and the need for the human factor to guide all negotiations.

“The Human Factor” criticizes those powerful individuals and entities that think that they can outsmart their opponents or business partners.

No matter what a person tries to negotiate, they will not outsmart their adversary.

Successful negotiators have to show their opposition respect and empathy.

A good deal is one that gives both parties some of what they are asking for.

Therefore, an effective negotiator has to address the needs of the person, or group of people, on the other side of the table.

The second lesson is part historical and part cultural.

Understanding cultural differences is key when making deals with powerful leaders of other countries.

In “The Human Factor,” when American leaders attempt to make a deal that would secure a peaceful future in the Middle East, many of them misunderstand the definition of the word future for those living in the Middle East.

To people in America, the future means what is to come at a later time and date.

However, for those in the Middle East, one cannot talk about what is to come in the future, without addressing the wrongs of the past.

In the past, people in the Middle East have battled bitterly over areas like the Gaza Strip and Jerusalem with many different groups claiming ancestral ownership of the land due to religious doctrine.

That region of the Middle East has a substantial Jewish, Muslim and Christian population, and all three religions have their origins in the region.

And the area consists of three strong leaders who do not want to give an inch to their adversary because of the consequences that might come from their own people if they show any weakness while negotiating with their enemies.

The Palestinian Liberation Organization (PLO) is led by Yasser Arafat, a man that is treated like a diplomat or national leader on the world stage, but is treated as less than that by those in his region.

The flamboyant PLO leader dresses in military garb, fancy headwear, with a pistol on his side.

Additionally, Arafat is known for greeting those he comes in contact with, with a kiss to both cheeks.

On the contrary, Israeli Prime Minister Yitzhak Rabin is the exact opposite of his Palestinian counterpart.

And he does not show his respect or endearment with kisses to the check.

Therefore, when President Bill Clinton invites both leaders to the White House to hash out an agreement on peace in the Middle East, Rabin has a few conditions.

Rabin insists that Arafat leaves his gun at home.

He wants the PLO leader to wear a business suit and not the military uniform that has become his image around the world.

And Rabin makes it totally clear that he will not tolerate Arafat’s kisses to the cheek.

Luckily, like two true gentlemen, the powerful politicians/leaders find common ground when it comes to attire and how they will greet one another in the White House.

But just when former President Clinton, Arafat and Rabin find mutual respect for one another and get close to a peace deal, up jumps the devil.

As a matter of fact, up jumps several devils because many obstacles become roadblocks and detours to true peace and true compromise in the turbulent Middle East region.

To put it bluntly, one interviewee states that the word peace should not be used when discussing relations with the people of the Middle East because peace requires a lot such as change and compromise.

And unfortunately, people feel comfortable with the past because they have grown accustomed to the status quo.

“The Human Factor” is a decent documentary and decent history lesson.

Unfortunately, if a person is not a history buff or is not passionate about foreign affairs then “The Human Factor” might not be their cup of tea.

But “The Human Factor” succeeds when the documentary details the importance of humanizing the group on the other side of the table when it comes to negotiating an agreement.

That lesson taught by “The Human Factor” is something everyone can learn from whether it is a business deal or just a personal relationship with another individual.

Many people become so arrogant that they believe their intelligence is so overwhelming that they can outsmart the other person no matter what.

But when people think that you do not respect them or take them seriously, then they are less likely to go along with your agenda.

However, if a person uses the human factor, realizing that the other person or group has to get something out of the deal, then compromise can possibly be achieved.