Film Review: ‘The Dissident’ Too Close for Comfort for U.S. 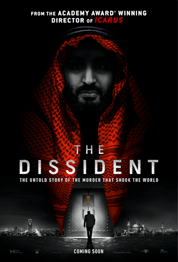 Dictators often call news that does not present them in a positive light as fake news or some similar phrase.

Under dictatorships, journalists cannot have opinions.

Their sole purpose is to praise the current regime.

And if a journalist does not abide by the rules, consequences and repercussions often follow.

“The Dissident” depicts this reality in a chilling and painful reminder of how precious and important freedom of the press truly is.

In Saudi Arabia, having an opinion is a crime.

Furthermore, having an opinion and the ears of millions ends up being capital offense for Washington Post reporter, Jamal Khashoggi.

Once a trusted member of Saudi’s King Salman’s inner circle, Khashoggi became inspired by the Arab Spring that occurred in Egypt in 2011.

As a result of that uprising, he began speaking out against some of the atrocities happening in Saudi Arabia.

By now, the name Jamal Khashoggi has become a household name.

Before his disappearance, the respected journalist had built a strong career for himself writing about issues in the Middle East for the world renowned, Washington Post.

Although he had gotten up in age, he had not forgotten about his personal life, despite dedicating his professional life to making life in Saudi Arabia better for the average citizen.

His life had really become complete when he proposed to his fiancé, Hattice.

Khashoggi knew very well that his profession could lead to danger for himself and his loved-ones.

But he had found purpose and happiness in his life and therefore had no concerns on the day of his disappearance.

Before he could legally remarry, the journalist had to visit the Saudi Arabia consulate in Istanbul to get documents proving that he was no longer married to his ex-wife.

Surprisingly when he got inside, he saw some familiar faces from the Saudi government.

He seemed surprised that they were at the consulate in Istanbul on that particular day.

What should have been an in and out ordeal, lasted for hours with Hattice left alone outside of the consulate as the day turned to night.

Knowing the type of journalistic work that Khashoggi did made Hattice and others very apprehensive because they knew what the Saudi king and government were capable of doing to dissidents.

Furthermore, consulates are under the jurisdiction of the countries that they represent.

As a result, Turkish authorities had no power to investigate his mysterious disappearance.

The thriller/documentary “The Dissident” begins three months after the mysterious disappearance with interviews featuring those closest to Khashoggi.

One of the best interviewees featured in “The Dissident” is Khashoggi’s friend and colleague, Omar.

Khashoggi and Omar had developed a strong global following via Twitter.

They used that platform, and other social media outlets, to disseminate information that state run news refused to air because it presented the government and its ruler in a less than flattering light.

Therefore, he was ordered to stop disseminating negative information about the Saudi government via mainstream media and social media.

Because of Khashoggi’s pending nuptials, Saudi officials had a prime opportunity to silence the outspoken journalist and social media influencer.

But getting to his comrade Omar proved to be more difficult for the Saudi government.

In “The Dissident,” Omar found a safe refuge from the Saudi government in Canada.

However, Omar’s family was not as lucky as him to get away from the oppressive country.

A wise person once said that if evil people cannot touch you, then they might just touch the next best thing, your family members.

The Saudi government continuously tries to get Omar to visit Saudi Arabia or at least its embassy to renew his passport.

However, the Saudi government does not know that Omar has been given official Canadian documents.

Therefore, Omar does not need a Saudi passport anymore.

He obviously realizes that the government is trying to set him up for the okey doke and refuses to play their maniacal and deadly games.

But the real scary thing about “The Dissident” is how far the Saudi government is willing to go to destroy dissidents and other enemies from across the globe.

What makes “The Dissident” so impactful is the fact that it comes out in 2020.

This year, Americans have seen how fragile democracy can really be when the person that leads the country is unstable and only concerned with holding on to power.

While President Donald Trump has made it almost a daily ritual to insult the free press with accusations of fake news, one only has to look at the saga of Khashoggi’s life to see what happens when countries only have a media that is dedicated to stroking an autocrat’s fragile ego.

But the rhetoric unleashed by many congregating throughout the country, and specifically in Washington, D.C., after President Trump’s election loss should cause anyone with a modicum of common sense to fear that America could one day fall down the death trap of a dictatorship.

“The Dissident” shows how important journalism is to holding those in power in check and challenging their more dangerous moves.

As a result, “The Dissident” is more than real news.

“The Dissident” is a wake up call to America and all other so-called democracies across the globe.