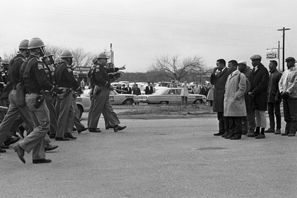 This year, Hollywood came to an almost complete standstill.

But one thing that has not stopped in 2020 is great documentaries that reflect where American society currently finds itself.

And though the splendid “John Lewis: Good Trouble” fits the description of a retrospective as much as a timely piece, the life that the late Lewis led has repeated itself as voting rights and the beloved American democracy finds itself in danger as a result of tyrannical politicians who want to crush the soul of our nation by destroying basic democratic principles.

First of all, time has a way of erasing the atrocities of yesterday.

It is easy to honor civil rights leaders of the past as heroes when their work ends up on the right side of history.

However, many civil rights leaders were despised during their lifetime like Martin Luther King, Jr.

Lewis found himself in a similar situation as King.

During his early activism, racists met Lewis with violence.

But in death, the country honored him as a stately hero.

“John Lewis: Good Trouble” immortalizes the strength and heroism necessary to knock down the walls of segregation and disenfranchisement in this country.

The name of the documentary speaks volumes.

As a child, getting into trouble never seemed like a good idea.

Getting into trouble meant punishment.

Getting into trouble meant chastisement.

Getting into trouble never really led to good results.

Therefore, to get into trouble could always end with negative consequences.

But throughout his life, as depicted in the documentary “John Lewis: Good Trouble,” the lifelong troublemaker championed the terms good trouble, necessary trouble and doing what was right regardless of the consequences.

Throughout his younger days, Lewis participated in sit-ins, marches in Selma, Ala., freedom rides and the March on Washington in an effort to replace the evil of segregation with the righteousness of integration and equality.

Although his efforts proved worthy, they did not come without consequences.

Lewis suffered severe injuries from law enforcement officials on the Edmund Pettus Bridge in Selma, Ala. marching for voting rights in 1965.

He faced angry mobs during the freedom rides, which tested integration in interstate travel.

By like King before him, Lewis had the conviction of his faith and the strength of his Savior to keep him going forward even when his methods seemed out of step with the younger demographic.

While many students of history know what Lewis did as a civil rights leader and politician, the childhood stories told in the documentary “John Lewis: Good Trouble” gives the film its heart and understanding.

And the fact that Lewis’ childhood story is not that different from many rural African-Americans of the same generation makes his eventual destination of greatness that much more inspiring.

For a child growing up in the Deep South in the early to mid 20th century, work often outweighed one’s dreams of the future.

Although schools existed for African-American children, the need to work in the fields to help provide for one’s family often made going to school on the regular basis impossible.

For Lewis, breaking the fields and picking cotton often meant missing weeks of school at a time.

And though many African-American children had to work the fields, it did not mean all of those children were good at it or enjoyed it.

Lewis wanted to be a preacher, and spent much of his time working on his sermons in front of his congregation of chickens.

What makes “John Lewis: Good Trouble” better than good is the fact that the documentary humanizes Lewis, showing his comical side and not just the serious side shown via mainstream media.

Lewis often told anyone who would listen, that he could encourage his chickens to nod their heads in approval and even bow their heads.

However, Lewis could never get the chickens to say, “amen.”

When Lewis told his mother that working in the fields was too hard, his mother replied that hard work never killed anyone.

To which Lewis replied, “well, it’s about to kill me.”

Therefore, Lewis’ oldest brother did his little brother’s share of picking cotton so that Lewis could devote his time to his schooling.

At the schoolhouse in Troy, Ala., Lewis had teachers that nurtured his intelligence, encouraged him to read as much as possible and inspired him to pursue higher education.

However, his life change drastically when he applied to the White, Troy University.

Troy did not refuse Lewis admission.

The university simply did not respond to his application, which encouraged him to reach out to King.

The revered civil rights leader took a liking to Lewis and soon “the boy from Troy” as King called him, found himself walking in the huge footsteps of his hero.

While “John Lewis: Good Trouble” essentially comes off as a well-deserved love story about Lewis, it does not sugarcoat some of the most tumultuous times of his life.

His long-term friendship with Julian Bond almost did not survive a bitter political battle that pitted two civil rights icons against each other.

Furthermore, “John Lewis: Good Trouble” did not even tackle Lewis’ battle with cancer, which resulted in his 2020 death.

Including that information, and showing how it did not stop Lewis from getting into more good trouble would have resulted in an even more splendid documentary.