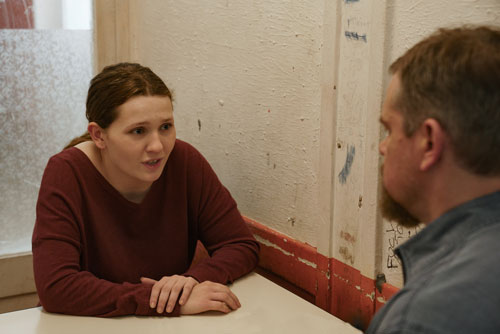 How far would you go to save a loved-one?

Would you put your life on the line?

Would you exhaust all your financial resources to rescue a family member wronged by the system?

Well, in “Stillwater,” Oklahoma resident Bill Baker (Matt Damon, “Ford v. Ferrari”) will stop at nothing to free his incarcerated daughter Allision from a French prison, where she is doing a bid for a murder, she swears she did not commit.

Unfortunately, when a person visits a foreign country, they must realize that certain things that are not crimes in their home country, might be illegal in another country.

Furthermore, when a person is naïve and new to a particular area, many locals will seek to take advantage of them in some form or fashion.

While Allison (Abigail Breslin) had found success at Oklahoma State University in Stillwater, Okla., out of the blue she decided she wanted to study abroad in France.

Therefore, she left her comfort zone, which included Oklahoma State Cowboys football and headed to a country and continent that loved another form of futbol, or soccer.

Allison loved everything about Lina.

She even moved in with Lina and that it was when the relationship began to unravel.

Lina began to cheat on Allison.

Then, Lina ended up dead and Allison got sentenced to prison for the crime.

The death of Lina made national news in France.

Despite Allison’s incarceration, she continues to fight to prove her innocence.

Her father seems to be the only person that believes in her innocence, spending countless days and an endless amount of money visiting her in prison and trying to free her from captivity.

Bill’s former mother-in-law thinks he should give it up.

The locals are convinced that Allison killed Lina because of her infidelity.

And Allison’s lawyer has given up on the case, despite Allison hearing rumors that a guy named Hakeem actually killed her ex-girlfriend, Lina.

In “Stillwater,” Bill does not have to just deal with his daughter’s nine-year prison sentence in France.

He also must deal with the realities of life in Oklahoma and the difficulty of finding jobs.

Bill’s background is working on oil rigs as a roughneck.

However, he has found himself without a job and unable to find a similar job since his last layoff.

He has found work, though, helping clean up in Stillwater, Okla. after a devastating earthquake rocked the area.

But despite his lack of funds, he still makes time for his baby girl as many fathers, or mothers for that matter, would.

Fighting to free one’s child that is innocent of a crime would be second nature to many parents.

But how do you begin to fight to free your daughter when she is imprisoned on another continent, and you do not even speak the language?

Furthermore, local thugs can spot a foreigner a mile away, which makes the parent vulnerable.

And despite France being known as the land of lovers, everyone there does not have love in their heart, especially when they spot an easy target.

In “Stillwater,” Bill’s saving grace comes in the former of his new neighbors at the local Best Western hotel, Virginie (Camille Cotton) and her adorable little daughter, Maya (Lilou Siavaud).

Bill befriends Maya after she is locked out of her mother’s hotel room at the Best Western.

A mutual respect and friendship develop between Bill and Virginie, and the young French theatre actress (or theater as Bill calls it with his Southern drawl) helps Bill communicate with the locals in the hopes of finding this mysterious Hakeem fellow and proving his daughter’s innocence.

While Bill’s relationship with his daughter is complicated to say the least, his bond with Maya is adorable despite the language difference.

Virginie even admits that it is cute that Bill speaks to Maya in English, and Maya pretends to understand what he is saying.

But despite the complicated daddy/daughter relationship between Bill and Allison, his love for has daughter has never wavered, despite his mistakes in life.

Furthermore, Allison must realize that Bill is her only advocate for an early release and exoneration of those murder charges.

She just needs someone to believe in her story and someone willing to follow her leads and find the elusive Hakeem.

Allison has even informed her father that the unknown DNA found at Lina’s murder scene might in fact be the DNA of Hakeem, which should definitely prove her innocence.

In “Stillwater,” Damon does a magnificent job.

The Boston native nails the Southern and country twang without trying too hard.

His accent does not seem fake or forced like Allen Payne’s Texas twang in “Jason’s Lyric.”

The thing about accents is if an actor cannot pull it off, they should not even attempt to do it.

Shout out to Regina Hall and Morris Chestnut in “When the Bough Breaks” for not even attempting to butcher the famous New Orleans accent.

But Regal loves the kids, and young Siavaud holds her own against the veteran Damon.

Cottin’s performance is nothing to sneeze at either, especially the love and dedication she shows for the character, Maya.

However, “Stillwater” is a little too long at two hours and 20 minutes.

Nevertheless, Damon proves he is still a force to be reckoned with based on his fabulous performance in “Stillwater.”