Film Review: Mark Rylance at His Best in ‘The Outfit’ 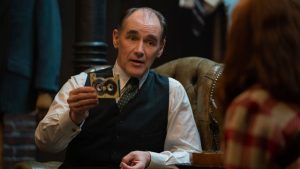 A double entendre represents something like a word or phrase with two different meanings.

To some an outfit only represents one’s attire, clothing or wardrobe.

In another sense, an outfit can represent a group, team or organization.

Some people’s personalities also fit the term double entendre in a way.

On the surface, one might have one personality to the people closest to them

But behind the mask or the façade, that person’s personality is the opposite of whatever people thought of them.

In “The Outfit,” Academy Award winner Mark Rylance is doubly good and at his complex best in what might be his best movie role to date, even better than his award-winning performance in “Bridge of Spies.”

In “The Outfit,” Leonard (Rylance), or “English” as the Chicago locals call him, is an expert cutter, not a tailor.

“English” describes a tailor as anyone who could hem a pair of pants.

What he does is far more meticulous and takes much more skill and talent.

“English” designs suits for some of the most known businessmen in Chicago.

While many people view clothes as just necessary attire, Leonard sees clothes as an extension of a person’s personality.

Is the person confident?

Does the person care about their appearance?

Does the person take risks?

The answer to all those questions can be answered by looking at a person’s outfit.

And shortly after meeting a potential customer, Leonard can have their personality summed up, knowing exactly what type of suit will fit that particular man’s style and personality.

Unfortunately, Leonard’s story of business success is coupled with apparent loneliness outside of his tailor shop.

He has no family, just his receptionist Mable (Zoey Deutch, “Dirty Grandpa”), whom he treats like a daughter or mentee.

Leonard apparently wants to groom Mable to take over the tailor shop when he is gone.

However, she does not have the love for the clothing business that he does.

Mable desperately wants to leave the “Windy City” for more extravagant locales like those in Europe, where Leonard immigrated from with just a pair of shears needed to cut clothing.

The receptionist even collects snow globes from cities and countries she has not visited as if to speak her future location into existence.

While Leonard is content in Chicago, Mable wants to get away from the element that Chicago is infamous for in 1956, which is organized crime.

Although Mable associates with men in organized crime like Richie (Dylan O’Brien, “Deepwater Horizon”), she knows how to handle herself amongst wise guys even if Leonard warns her about hanging out with the sort.

Like many businesses in neighborhoods controlled by organized crime organizations or crime outfits, business owners like Leonard must pay a tax to the mob bosses for protection or just doing business in their neighborhood.

Unfortunately for Leonard in “The Outfit,” his tailor shop has become something of a drop off spot for those taxes from local businesses.

As a result, mobsters like Richie and Francis (Johnny Flynn, “The Dig”) frequent the tailor shop to collect their money and to conduct business and business meetings.

Francis and Richie even make Leonard leave rooms in his own shop when they want to discuss business in private.

While Leonard does not like the current arrangement, business runs smoothly until one day when the grits hit the pan.

Francis and Richie, who both work for Richie’s father Roy (Simon Russell Beale, “My Week with Marilyn”), have received a tape from the FBI that will let them know who has been ratting them out to the FBI.

Supposedly, the FBI has planted a bugging device somewhere, and the information contained on the recording might bring down several organized crime families in Chicago if they do not bring themselves down first trying to sniff out the rat.

First and foremost, “The Outfit” is an exceptional film all around.

Screenwriters Johnathan McClain and Graham Moore did an amazing job with the script of “The Outfit.”

The dialogue in “The Outfit” is clever, filled with comical one-liners from many of the characters.

Every actor in “The Outfit” does a remarkable job with their characters and their performances.

However, the star of stars is Rylance in his performance as “English.”

Rylance’s character will remind some of Tom Hardy’s performance in “The Drop.”

While Hardy’s performance as Bob in “The Drop” lacked the class and sophistication of Rylance’s performance of Leonard in “The Outfit,” both were underestimated by their peers, and both deserve the adjective of unpredictable.

And just like the character Leonard, “The Outfit” is unpredictable to the very end, with moviegoers not knowing who the rat truly is and not knowing who will live or die.

“The Outfit” only gets a bit boring with its focus on the tailoring profession and Leonard’s attention to detail.

However, Leonard’s love for his craft will make audiences love him and root for him despite the conundrum he finds himself in.

Thankfully, “The Outfit” will appeal to various movie fan bases because of its combination of themes like organized crime, fashion, family relationships, romantic relationships, trust and betrayal.