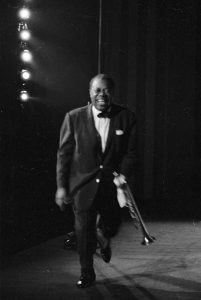 Some African-American legends like Louis Armstrong remain misunderstood and underappreciated.

Many lived at a time when African-American talent did not get the limelight that many enjoy today.

None enjoyed the same amount of freedom that current African-Americans artists enjoy speaking out on controversial issues.

Therefore, many had to play the game and appear non-threatening to open doors that many still get to run through today.

However, by playing the game, many like Armstrong received the unfair moniker of Uncle Tom and other racial insults.

What viewers will discover is a person that had a strong disdain for racism and segregation.

But because of the times, he chose to make a difference by bringing people together via his oversized personality and oversized talent.

“Pops” or “Satchmo” as many called Armstrong grew up dirt poor in segregated New Orleans in the early part of the 20th century.

Early on, America had already decided his future because of the color of his skin and his socioeconomic status.

Society had determined that Armstrong would live the life of a second-class citizen.

His occupation would be limited to working in brothels, doing domestic work or resorting to petty crime.

However, when juvenile delinquency leads Armstrong to a group home, he luckily discovers a love for music, more specifically the beautiful sounds of the trumpet.

The beautiful documentary “Louis Armstrong’s Black & Blues” is like Armstrong’s own personal autobiography.

Instead of a documentary with others receiving the spotlight, “Louis Armstrong’s Black & Blues” keeps Armstrong as the focus with recorded conversations that he had about his career and the country surrounding him.

Additionally, “Louis Armstrong’s Black & Blues” uses voiceover from rap legend Nas, who narrates the film from essays that Armstrong wrote about his career and his life.

For the most part, the comments of others are left to voiceovers with only a few legends like actor Ossie Davis receiving screen time, which keeps the emphasis on the legendary life of “Satchmo” himself.

By letting Armstrong speak for himself and allowing him to answer his critics, “Louis Armstrong’s Black & Blues” might actually give Armstrong a bigger voice on issues that are unfortunately still prevalent in modern times.

Unfortunately, African-American legends had to endure ridicule by other races because of the color of their skin and ridicule from their own race for acquiescing and assimilating into a Hollywood system built on White supremacy.

Like actor Sidney Poitier who is profiled in the Apple TV+ documentary “Sidney,” African-American talent had to be non-threatening when they attempted to kick down the proverbial Hollywood door.

However, “Louis Armstrong’s Black & Blues” shows that although Armstrong often flashed the wide and famous smile on stage and on camera, behind closed doors he refused to take any foolishness from racists.

One of the scenes that sticks out in “Louis Armstrong’s Black & Blue” is when he was chosen as King Zulu for the Zulu ball and parades during New Orleans’ Mardi Gras.

As a child of the “Crescent City,” Armstrong dreamed of being named King Zulu like many African-American residents of the city.

One of the traditions for King Zulu is covering one’s face with blackface makeup.

But the White actors in blackface would play African-American characters in a stereotypical and minstrel show manner.

The documentary “Louis Armstrong’s Black & Blues” does a brilliant job of bringing in another jazz legend from New Orleans, Wynton Marsalis, to give his opinion of “Pops” and tell what impact the legendary “Satchmo” had on the younger New Orleans great.

In “Louis Armstrong’s Black & Blue,” Marsalis considered Armstrong an Uncle Tom earlier in his life, too.

But as he learned more about Armstrong’s true personality and true contribution, Marsalis realized that his assessment of “Pops” was wrong, initially.

The documentary “Louis Armstrong’s Black & Blues” shows that Armstrong was no sell-out.

The genius just had a unique personality, which stayed the same off or on camera.

His jovial personality opened doors that anger would not have.

But he never forgot the pain of racism and segregation that he felt growing up in New Orleans.

Armstrong made a difference by refusing to perform in hotels that he could not stay in because of Jim Crow laws.

Additionally, Armstrong chose not to participate in Civil Rights marches because one punch to his lips would have ended his career and prevented him from taking care of his family.

As a result, Armstrong chose to assist the movement financially by using his wealth to fund certain initiatives within the movement.

And then when Armstrong chose to speak up in support of the Little Rock Nine, his words might have been received more by mainstream society because of his popularity amongst the White community, and the fact that he was not known to run his mouth on every issue.

But what sticks out most about “Louis Armstrong’s Black & Blues” is what stuck out most about the man, which was his beautiful jazz music that spoke to the soul of Americans, and still does to this day.

The music was legendary.

The man was legendary.

And thankfully, “Louis Armstrong’s Black & Blues” is bringing this legend back to the forefront for a new generation, new century and new millennium.