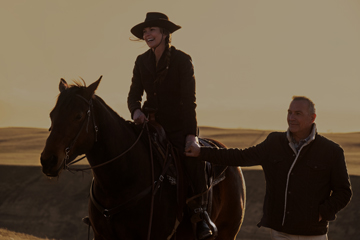 How far will you go to save a family member?

Would you drop everything, and put all of your efforts into bringing them back home?

Furthermore, would you put your life on the line to save the life of a child or a grandchild?

While many people would put their life on the line hypothetically, in the film “Let it Go,” grandparents Margaret Blackledge (Diane Lane, “Justice League”) and George Blackledge (Kevin Costner, “The Highwaymen”) have to deal with what really goes down when you have to save your loved-one from certified gangsters.

In “Let It Go,” George and Margaret have let all of their worries go and are enjoying their retirement.

The Blackledge family lives on a beautiful ranch in Montana.

George has retired as a sheriff and Margaret is enjoying time with her horses, her son James Blackledge (Ryan Bruce), her daughter-in-law Lorna Blackledge (Kayli Carter) and her grandson Jimmy Blackledge (played at various ages by Bram Hornung and Otto Hornung).

As they say, life is good for the Blackledge clan.

But like many pastors would say, either you are in a storm, getting ready to head into a storm or getting out of a storm.

Unfortunately, when the storms of life hit the Blackledge family in “Let it Go,” the storm hits like a hurricane, tornado and tsunami all rolled into one.

Tragically, James dies after falling off of his horse in “Let Him Go.”

Therefore, instead of planning for more grandchildren and an even better retirement, Margaret and George have to prepare to bury their only son.

Like many grandparents, Margaret and George stay a part of their grandson Jimmy’s life by staying a part of Lorna’s life.

Although they do not necessarily approve of her second marriage to Donnie Weboy (Will Brittain, “Blow the Man Down”), George and Margaret show up at the wedding to support their son’s widow and their grandchild.

With Lorna and Jimmy now living in an apartment with Donnie, the new living situation takes some getting used to initially.

However, George and Margaret still get some quality time with Jimmy periodically.

While the new family seems O.K. from the outside looking in, the Montana town that the Weboys and the Blackledges live in is not that big.

As a result, controversy and contention does not stay closeted for very long.

While in her parked car in a local parking lot, Margaret witnesses Donnie becoming abusive with Jimmy and Lorna.

When Margaret shows up at Lorna and Donnie’s new apartment to check on their welfare, an apartment employee informs Margaret that the young family has packed up and moved.

As time passes and Margaret cannot get into touch with Lorna and Jimmy, she convinces her former sheriff husband to dust off his investigative skills to bring their grandchild and former daughter-in-law back home.

Rumor has it that Jimmy and Lorna have gone to North Dakota to live with the rest of the Weboy family.

So, the Blackledges pack up their car and head to North Dakota to see if they can locate their missing loved-ones.

Often when a person searches for another person or family in rural America, danger does not come their way.

In small town U.S.A. the residents are often friendly.

Many people in rural America will point you in the direction you need to go in order to help you accomplish what you set out to do.

If a person wants to find someone, it often is not that difficult to find him or her in small towns because everyone knows everyone.

As a matter of fact, in the country many people are related to one another in some form or fashion.

Therefore, when Margaret and George begin asking around North Dakota for the Weboys, they play the family card since their grandchild has a Weboy as a stepfather.

The only problem with searching for the Weboy family is that most people in their small North Dakota town do not want to have any encounters with the family because of their notorious reputation.

The Weboy family runs the underworld in North Dakota.

As a result, the family controls the entire area by fear.

So when George and Margaret arrive in town and check in with George’s fellow boys in blue, he believes that he will have some comrades in the trenches with him when he battles the Weboy family for his late son’s little boy.

But somehow, word gets back to the Weboy family that George and Margaret are looking for their grandson before the Blackledges even leave the police precinct in North Dakota.

Although the Weboys have struck fear in everyone in North Dakota, fear often goes out of the window when the safety of a family member is on the line.

“Let Him Go” is beyond solid.

The film “Let Him Go” is reminiscent of certain storylines from “Tyler Perry’s The Haves and Have Nots.”

The Weboy family runs their small town in “Let Him Go” like the Malone family runs Savannah, Ga. in “Tyler Perry’s The Have and Have Nots.”

Blanche Weboy (Lesley Manville) is like Mama Rose (Rachel Winfree) from “Tyler Perry’s The Have and Have Nots.”

Manville is just a far more superior actress than Winfree.

“Let Him Go” falls into the predictable category like many Hollywood movies.

To an extent, moviegoers will know the outcome before the conclusion of “Let Him Go.”

Nevertheless, the film does a more than solid job of showing how far family will go to save one of their own.