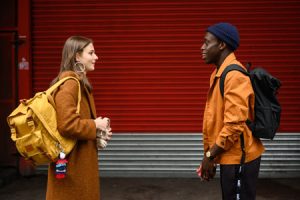 Moving to the big city can become intimidating.

However, sometimes moving into a larger market can transform one from dreamer to walking in that dream.

But in the eccentric, unique and amazing “Last Night in Soho,” Eloise quickly finds out that chasing one’s dreams does not mean one can escape past, present and future nightmares.

In “Last Night in Soho,” Eloise or Ellie (Thomasin McKenzie) knows what she wants from life despite her youth.

Like her deceased mother before her, and to a lesser degree her seamstress grandmother Gran, Ellie wants to move to London and take over the fashion world with her elaborate and exquisite clothing designs.

Her mother had the same dream, but the pressures of the business and failing to take care of her mental health caused Ellie’s mother to take her own life when Ellie was only seven-years-old.

However, she worries that sending Eloise off to London alone might become too much for her granddaughter to bear.

While many artistic people get the label of eccentric or weirdo, Eloise’ grandmother knows that her granddaughter is extremely different.

As a result, she can often see her deceased mother (Aimee Cassettari) watching over her as if she is guiding her ambitious daughter through life from the other side.

Therefore, Eloise’s grandmother does not want her gifts, her visions and her vision for fashion to get her into trouble while living alone in such a big city.

Being a naive eccentric in the countryside is one thing.

But when the naïve and eccentric country girl moves to the inner city, trouble that she cannot get out of might await.

Nevertheless, in “Last Night in Soho,” Eloise heads off to London after gaining admission to a school for fashion design.

While other students rock the latest fashion, Eloise rocks her own handmaid designs that causes her to stand out like a sore thumb amongst her classmates like party girl, Jocasta (Synnove Karlesn).

When Jocasta and the girls get drunk and have sex with random guys, Eloise chooses instead to curl up with a blanket on a couch and drink soda.

As a result, it is not long before Eloise leaves the college living life and finds a room at an old house run by an innocent old lad named Ms. Collins (Diana Rigg).

After she does not initially fit in living in campus housing, Eloise finds her stride while living with Ms. Collins because of visions or dreams she begins having while renting that room.

In “Last Night in Soho,” it is as if Eloise is transported into the 1960s every night, immersed in an era of retro fashion and retro style.

In her dreams, Eloise sees an aspiring singer named Sandie (Anya Taylor-Joy), who with the help of her new boyfriend/manager Jack (Matt Smith), begins making a name for herself on the London nightclub circuit.

Eloise takes those dreams and begins incorporating the designs she sees in her visions into actual designs for her fashion classes, which earns her praise from faculty and jealousy from classmates.

It is like Eloise cannot wait to get to sleep, so she can doze off to old records from the 1960s and get transported to a time that inspires her own style and possibly a new trend in the London fashion world.

However, when Eloise’s dreams become a little too vivid and concerning, she realizes the dreams might represent more than just inspiration for her fashion career.

Those dreams might represent clues in unsolved mysterious that have remained cold cases in London since the 1960s.

In “Last Night in Soho,” McKenzie plays a character arguably different from any other character in modern movie history.

To many, Eloise is just crazy with her visions and ideas.

But, like Kanye (or just Ye) West once said, name one genius that is not crazy.

Is Eloise crazy or is she really onto something with her visions?

If she is truly on to something with her visions, how can she get the people around her and in authority to take her seriously?

Thanks to filmmaker Edgar Wright’s vision and creativity, “Last Night in Soho” proves that Hollywood has not seen the last of true original content.

Hollywood tends to get formulaic, giving moviegoers the same themes and sometimes the same movies that they have seen countless times.

With “Last Night in Soho,” Wright shows that his own movies are truly unique from some of his other movies.

Therefore, there is little chance of him getting the label of formulaic.

“Baby Driver,” one of the best films of 2017, starring Jamie Foxx, Jon Bernthal, Jon Hamm and Ansel Elgort, has nothing in common with “Last Night in Soho.”

Creating movies with very few similarities is the sign of true creativity and a moviemaking juggernaut.

In “Last Night in Soho,” McKenzie plays Eloise with a quirky and likable quality that will make audiences cheer for success despite her issues.

Even when Eloise battles her demons in weird and dangerous ways, she is still so likable that classmates like John (Michael Ajao) desperately want to be there for her in her time of need.

But the unpredictable star of “Last Night in Soho” is Rigg, who plays Eloise’s landlord, Ms. Collins.

Unfortunately, “Last Night in Soho” might turn off some because of the emphasis on the fashion industry.

Furthermore, “Last Night in Soho” takes a while to get to the good stuff.

But when it does, it really does get good.

Fortunately, McKenzie is good enough to carry “Last Night in Soho” before the film gets to the true tension.