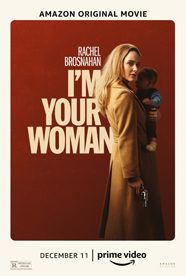 On the soundtrack to Spike Lee’s movie “Girl 6,” Prince had a song entitled, “Don’t Talk 2 Strangers.”

The lyrics of the song read, “Little darling gotta go now, got my future all planned out, before I go, don’t talk 2 strangers, don’t forget 2 say your prayers at night, remember God He made you, one day He’ll make everything alright.”

The message of not talking to strangers resonates throughout the movie “I’m Your Woman.”

But sometimes, people we’ve never met before are not the only strangers.

Sometimes, a person can sleep next to another person every night for years and not realize that they are a stranger too until all of their secrets bubble to the surface.

But what does the mean, really?

They have shared some years and some heartbreak together.

But Jean really does not even know what Eddie does for a living like Tommy’s friends on the sitcom “Martin.”

Unfortunately, not knowing Eddie’s secrets have deeper consequences than comedy.

Regardless, the couple seems to have a decent life on the outside looking in.

However, beneath the surface cracks do appear.

Eddie and Jean have a nice house but not a true home with the laughter and joy of children and the comfort that comes from a strong marriage.

Despite not having any children of her own, Jean has always desired to have her own family.

To make his wife happy, Eddie comes home one day with a brand new infant as if he bought him from the shelves of a toy store like a cabbage patch doll.

Eddie has not legally adopted a baby behind Jean’s back.

He has not gotten another woman pregnant and taken custody of the baby.

The mysterious Eddie just shows up with a baby.

And despite Jean’s initial apprehension, she accepts the baby as her own and names him, Harry.

Eddie then leaves baby Harry with his new mother, telling her that he will not be home later that night.

Nothing about that disturbs Jean too much because it is par for the course with her mysterious husband.

But when Eddie’s colleague Jimmy busts into Jean’s home in the middle of the night, making her pack her clothes, giving her $200,000 and forcing her to leave the home, she finally realizes that something is seriously not right with her husband and their family life.

Some serious street characters are looking for Eddie and Jean and it is imperative that Jean lays low and has no contact with other people until things cool off.

Cal (Arinze Kene) is tasked with transporting Jean and Harry to their new safe house.

His line of work makes him quiet even though he seems to take a liking to Jean, and takes protecting her very seriously.

However, Cal never lights those cigarettes.

Either he is trying to kick the habit for himself or someone very close to him does not like his nicotine addiction.

In “I’m Your Woman,” Cal has specifically warned Jean about the dangers of speaking to other people, especially new people.

Eddie’s life is in danger and therefore so is Jean’s life.

So it is extremely important that Jean sticks to the script by sticking to herself.

Evelyn could be a typical elderly neighbor who is too friendly when it comes to welcoming new residents to the area.

Or she could have more sinister intentions with her dealings with Jean.

Regardless, entertaining Evelyn could have bad results regardless of Evelyn’s motives.

The most calming character in “I’m Your Woman” is Art (Frankie Faison, “Coming to America” and “Tyler Perry’s Meet the Browns”).

Art puts Jean’s current predicament into perspective for her and helps navigate the realities of her current situation.

“I’m Your Woman” is effortlessly suave with its 1970s Pennsylvania setting.

All of it makes for the aesthetic of a 1970s Blaxploitation film with more diversity.

“I’m Your Woman” also is like the “Poetic Justice” of crime dramas.

The 1993 film “Poetic Justice,” starring Janet Jackson, Tupac Shakur and Regina King, which was directed by the late, great John Singleton, showed what violence did for the relatives and friends of gangsters and other people from the street.

When Eddie has to flee the scene, it throws his wife and “son’s” lives into a free fall.

Sure, the money that comes from a life of crime seems great when everything is copasetic.

But what happens when things awry as they often do on the streets?

Many street hustlers and gangsters know what they are signing up for when they volunteer for a life of crime.

However, what does it do to one’s family when their crimes affect the innocent civilians of their lives?

A gangster’s choices mean that the civilians in their lives have to start living by street principles even if they have never participated in street activity.

And rule number one on the streets is to never trust anyone.

Like Prince would say, do not even talk to people you do not know (i.e. strangers).

As Prince sang, “Don’t talk 2 strangers, don’t forget 2 say your prayers at night, remember God He made you, and one day He’ll make everything alright.”

“I’m Your Woman” opens in select theaters on Dec. 4 and will stream on Amazon Prime Video beginning on Dec. 11.