Film Review: ‘I Wanna Dance With Somebody’ Reminder of How MAGICAL Whitney Was 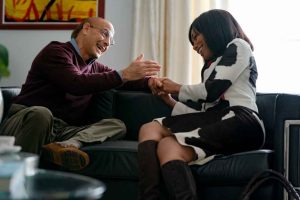 (“I Wanna Dance With Somebody” trailer courtesy of Sony Pictures Entertainment)

Many people possess talent regardless of profession.

However, few people have the magic that separates talented individuals from special people and icons.

Whitney Houston had a MAGICAL voice and stage presence.

Houston’s biopic “I Wanna Dance With Somebody” will remind those who may have forgotten how MAGICAL she was and will have fans and newcomers swaying in their seats as they reminisce on those iconic songs that got her crowned, “The Voice.”

Unfortunately, biopics like “I Wanna Dance With Somebody” which are based on icons like Houston find themselves in a catch-22.

However, when someone stayed in the public eye for over a quarter of a century, fans have probably heard practically every important story there is to be told.

Furthermore, with a legendary career and life like Houston’s, it is almost impossible to put every important event in a film.

Nevertheless, director Kasi Lemmons (“Harriet”) still manages to create a marvelous, concert-like film with “I Wanna Dance With Somebody.”

Houston’s rise to stardom is as magical as her actual talent.

The singer, known as “Nippy” to family and close friends, comes from a musical background.

And Aretha Franklin was pretty much Houston’s godmother.

God had touched many people in Houston’s family and close circle of friends.

However, when he touched Houston, God gave her a golden voice with the looks and charisma to make her America’s sweetheart, and not just another great R&B singer.

When Cissy sees that Whitney (Naomi Ackie) is serious about entering the entertainment business, her role changes as she becomes part mother and part coach.

Despite knowing how blessed Whitney is, Cissy does not allow her daughter to take her talents for granted.

Her gifts come from God and should be taken seriously.

Many parents, who do not become icons despite their talent, often live vicariously through their children, pushing them too hard or trying to steal the spotlight from their more talented children (i.e., Joe Jackson and LaVar Ball).

In “I Wanna Dance With Somebody,” Cissy navigates that tight rope to perfection, pretending to have voice issues when she sees Arista Records CEO Clive Davis (Stanley Tucci) in the audience of one her shows.

To help Whitney get experience and exposure, Cissy has made her daughter a part of her act as a background singer.

However, she knows a king (or queen) maker could change her daughter’s life forever and make her dreams come true in an instant.

Therefore, Cissy makes Whitney sing “The Greatest Love of All.”

And to put it bluntly, Clive knows he has just heard arguably the greatest voice of a generation in young Whitney.

In “I Wanna Dance With Somebody,” Clive immediately signs Whitney to a record deal.

The next mountain to climb, however, is to find the right material to take advantage of Whitney’s soaring vocals.

Almost immediately after her debut album drops, Whitney goes from unknown to megastar.

Unfortunately, success is not always a smooth ride.

That is especially true for a superstar whose public image as America’s sweetheart masks a reality that is rougher around the edges.

“I Wanna Dance With Somebody” does not shy away from her tumultuous marriage with the bad boy of R&B Bobby Brown (Ashton Sanders, “Moonlight”), her rumored lesbian relationship with best friend/creative director Robyn Crawford (Nafessa Williams), drug abuse and family disharmony.

As a result, “I Wanna Dance With Somebody” makes Whitney more relatable to fans and newcomers.

Additionally, it makes the ultimate ending of “I Wanna Dance With Somebody” that more heartbreaking because despite the tabloid fodder, very few wanted to see Whitney lose the battle with her demons.

In “I Wanna Dance With Somebody,” Ackie and Sanders nail Whitey and Bobby’s speaking voices, respectively.

Also, Lemmons does a marvelous job of weaving in real footage from “The Oprah Winfrey Show” and “The Bodyguard” into “I Wanna Dance With Somebody.”

That song encompasses the film and possibly Whitney as an individual.

Having to be something that she is not for the public to accept her career coupled with a troubled family life could lead a person to destructive behavior.

The key is to have people around that will not allow that person to self-destruct.

But how does that work with a person as rich and powerful as Whitney who could get rid of anyone that is not a yes-man or yes-woman?

Despite the magic of “I Wanna Dance With Somebody” and the 2 hour and 26-minute run time, the Houston biopic seems a little rushed and jam-packed, which is understandable considering her eventful life.

It would have been great to see a depiction of Houston’s childhood in “I Wanna Dance With Somebody” to see what role her mother’s career in entertainment played on her upbringing.

Fans know what role parenting played in her talent and success.

But what negative impact, if any, did it have on a young Whitney?

And what role did those possible demons have on her ultimate demise?

“I Wanna Dance With Someone” dances around that.

But it does not dance around much else, which contributes to its effectiveness of telling Whitney’s story without much filter.