Film Review: Hudson Stellar as ‘Queen of Soul’ in ‘Respect’ 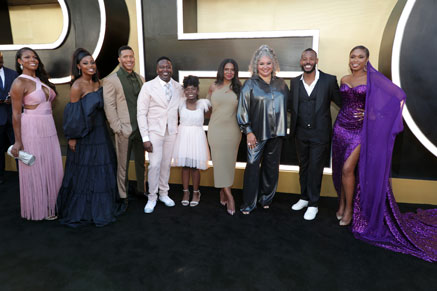 In fact, most of the co-stars, especially Marlon Wayans, deliver stellar performances in the great biopic, “Respect.”

However, the pandemic messed up the timing of “Respect.”

As a result, the Cynthia Erivo-led National Geographic miniseries “Genius: Aretha” did a more effective job of telling Franklin’s story simply because a miniseries, obviously, has more time to fully develop and fill in the gaps in a way in which a theatrical movie cannot because of time constraints.

Unfortunately, the comparison to “Genius: Aretha” will cause the viewers of the miniseries to be overly critical of “Respect.”

But the biopic “Respect” is so great, thanks to Wayans and Hudson, that you must respect it.

And viewers should expect award nominations galore for “Respect.”

Franklin, the singer and civil rights activist, needs no introduction.

Everyone breathing knows that God blessed her with one of the greatest singing voices of all time.

Furthermore, many people know how Franklin used her voice to support activists like Martin Luther King, Jr. and Angela Davis.

But when entertainers blow up, many fans only see the result and not the struggle they went through in order to reach the pinnacle of success.

Therefore, many people believe that gifted people wake up one day, snap their fingers and superstardom follows.

But “Respect” shows the struggle that Franklin had to go through, releasing nine albums on Columbia Records without a hit.

Nowadays, a record label would probably not give a young artist that many chances to score a hit.

But with Franklin’s unmistakable talent, she did not find it hard to find a new record label after Columbia dropped her.

After initial failure, Franklin joined Atlantic Records determined to record the type of music she wanted to record.

Many creatives will tell you that their career did not take off until they stopped listening to those in their circle and simply did things their own way.

When artists begin to be true to themselves and tell the type of stories that they want to tell, they often experience the success that eluded them in the past.

Thankfully for Franklin, that is what happened when she teamed up with some musicians from Muscle Shoals, Ala. and began recording hits like “I Never Loved a Man (The Way I Love You),” “Respect,” “Think,” “Do Right Woman, Do Right Man,” and “(You Make Me Feel Like) A Natural Woman.”

But despite the success, trouble is never too far behind for anyone, even those as talented as Franklin.

Bad relationships, demons such as alcohol and a turbulent relationship with her family threatens to destroy all her success in “Respect” if the young queen does not learn how to respect herself and those who care the most about her.

“Respect” will dazzle fans and non-fans (if any exist) of Franklin.

Hudson has always been the perfect actress to play the “Queen of Soul” since she dazzled as Effie in “Dreamgirls.”

The former “American Idol” contestant has the look, the voice and the acting chops to pull off the role of her career.

Hudson herself said that she had to portray Franklin in her most uncertain points in life, not the confident “Queen of Soul” that she eventually became.

She had to portray Franklin as she constructed songs from scratch, not just belt out the classics as we know them in finished form.

Furthermore, Hudson had to portray Franklin before she was confident in who she was as a person.

That vulnerability will truly connect with moviegoers because it humanizes someone that people often put on a pedestal.

Moviegoers will hate Wayans after his brutal performance as Franklin’s husband/manager, Ted White.

The sign of a great performances is when moviegoers forget how likable a person is in real life and begin to despise the character they play.

Greatness does not need any further explanation, and Whitaker exemplifies greatness in all his roles.

Tituss Burgess is not convincing in his portrayal of Reverend Dr. James Cleveland.

His performance is too timid to be convincing as the powerful Cleveland.

Omar Dorsey’s performance as Cleveland in “Genius: Aretha” is the performance that stands out among the two.

Furthermore, because of time constraints, “Respect” could not go into too much detail about Franklin being molested as a child.

Also, with more time “Respect” could have gone into detail about the philandering ways of Franklin’s father C.L. (Whitaker), and allegations of child molestation against him.

But the actors had big shoes to fill portraying iconic figures in history, and they did a fabulous job when put into context.

Look out for portrayals of Dinah Washington by Mary J. Blige, Martin Luther King Jr. by Gilbert Glenn Brown (“The Young and the Restless”) and Smokey Robinson by Lodric D. Collins (“Tyler Perry’s The Oval”).

But “Respect” is still a what could have been and not because there is much wrong with the biopic.

But if “Respect” had dropped before “Genius: Aretha,” genius would not even have been strong enough of a word to describe Hudson and Wayans’ performances.

Therefore, stellar it is.