Film Review: ‘House of Gucci’ Proves Love of Money Truly Root of All Kinds of Evil 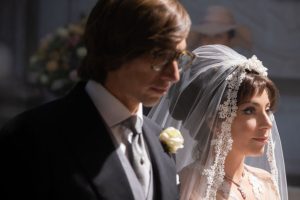 The film “House of Gucci” might truly prove that rich people have more problems than poor people, and those problems stem from people trying to snatch their throne.

In the Bible, 1 Timothy 6:10 states, “For the love of money is the root of all evil: which while some coveted after, they have erred from the faith, and pierced themselves, through with many sorrows.”

On The Notorious B.I.G.’s hit “Mo Money, Mo Problems,” R&B singer Kelly Price sang, “I don’t know what they want from me, It’s like the more money we come across, The more problems we see.”

Like many rich kids, Maurizio Gucci (Adam Driver, “The Last Duel”) will one day possess an empire.

But like many rich kids, Maurizio is more concerned with pursuing a normal (law) career and spending time with the new love of his life, Patrizia Reggiani (Lady Gaga, “A Star is Born”).

While Maurizio fancies Patrizia, his elitist father Rodolfo Gucci (Jeremy Irons) does not think Patrizia fits in with the Gucci family or is a good match for his pampered son.

Although Patrizia’s family owns a successful business just like the Gucci family, a big gulf exists between a truck driving company and a high-end luxury fashion line.

Rodolfo has even constantly warned his son to be aware of women trying to seduce him just so that they could get a piece of his money and his birthright.

Despite Rodlfo’s apprehension, Maurizio knows that Patrizia is not a gold digger and only wants him, not the lucrative company.

Nevertheless, when Maurizio goes against his father’s advice and decides to marry Patrizia, Rodolfo excommunicates his son from the company and the mansion that he shared with his son.

As a result, Maurizio must find his first real job working for his father-in-law Fernando Reggiani’s (Vincent Riotta) trucking company.

Despite the loss of prestige and fortune, Maurizio is happy with his simple life and loving wife.

But the person most unhappy with Maurizio’s current living situation and job is his uncle, Aldo Gucci (Al Pacino).

While Rodolfo sees no future for Maurizio at Gucci, Aldo sees his nephew as the future of the company.

More importantly, Aldo does not believe that his own son Paolo Gucci has a future with Gucci.

Aldo refers to Paolo as an idiot, but he lovingly calls his son, his idiot.

While Paolo definitely has talent when it comes to fashion design, his creations contain too many colors and too much wildness to ever match the Gucci brand, which has a reputation of class and sophistication.

As a result, Aldo, with a little help from Patrizia, convinces Maurizio to come back to the family business.

While Gucci has a name, other designers have overtaken Gucci when it comes to what is popular on the streets as far as fashion is concerned.

Therefore, maybe Maurizio and Patrizia can breathe new life into the aging brand.

But while many people have ideas, some ideas should stay ideas because when people get power, even if they come from money, it could ruin a person who has the best intentions, initially.

There is a reason why people say that absolute power corrupts absolutely.

Unfortunately, the Gucci brand might suffer because of that abuse of power.

“House of Gucci” will resonate with many because of its timeless tale about the danger of lusting for wealth, power and fame.

Additionally, “House of Gucci” will connect with fashion lovers who might not know of the famous faces and names that passed through Gucci on their way to fashion icon status on their own.

In “House of Gucci,” Lady Gaga delivers a fantastic performance.

Nevertheless, she still succeeds in “House of Gucci” because many people can relate to having a common upbringing but having the desire to want much more in life.

But his performance as a bumbling idiot will still amuse.

Leto is almost unrecognizable as Paolo in “House of Gucci.”

More importantly, “House of Gucci” has just enough twists and turns to make it more than just a biopic of the Gucci family.

Unfortunately, “House of Gucci” drags a little too much at the beginning.

Much of that time details the meeting, courtship and relationship between Maurizio and Patrizia.

However, viewers will want to see the mess and controversy dealing with the Gucci brand from inside the company’s walls.

Their early relationship does not entertain as much as their actual time as husband and wife, unfortunately.

As a result, “House of Gucci” stretches to two hours and 37 minutes when closer to two hours would have sufficed.

Despite, the length “House of Gucci” is worth the money for a ticket.