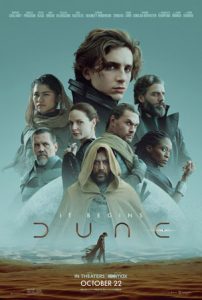 The Holy Bible says that the love of money is the root of all kinds of evil.

And throughout history this has proven true.

For the love of money, people have oppressed other people.

For the love of money, and the resources that are worth a lot of money, people have gone to war with other people.

Therefore, in “Dune” it should come as no surprise when inhabitants of a planet called Arrakis find themselves oppressed by outsiders because their planet contains certain spices that are a lucrative commodity throughout the universe.

And like in real life, when the oppressor sees their power in danger, it probably will cause them to resort to violence to maintain the social order or status quo of the land, regardless of the devastation and destruction that might result.

In “Dune,” Paul Antreides (Timothee Chalamet, “The Adderall Dairies”) does not know it at first, but he is not like every other young man on his planet and his kingdom, House of Antreides.

However, some day the House of Antreides people will follow the direction of Paul even if he does not see himself as a leader yet.

Unfortunately, leaders often do not choose to lead.

Leaders often get chosen because of their unique talents and abilities.

Historical figures like Martin Luther King, Jr. did not want to lead the Montgomery Bus Boycott.

Furthermore, King did not want to lead the Civil Rights Movement.

But the moment chose him.

And instead of becoming just a pastor and a college professor, he led his people to the Promised Land.

Furthermore, Jesus Christ did not want to suffer on the cross.

But His life had already been written before Mary gave birth to Him.

God had chosen Him to lead His people away from a life of sin and to salvation.

In “Dune,” Paul is not as dynamic as King or as messianic as Christ.

However, to the Fremen, the oppressed people on the treacherous planet Arakkis, Paul just might be the savior that they had been promised.

The savior that will lead the Fremen and the House of Antreides past the oppressive people form the House of Harkonnen.

Initially in “Dune,” Paul knows something is different about him because he constantly has the same dreams and visions as if those dreams represent a premonition of the times to come and his role in those times.

Although Paul does not quite know his role as a leader and what his dreams represent, it is as if his parents have begun preparing him for some unknown future battle.

In “Dune,” Gurney Halleck knows how barbaric it is on the planet that the Antreides will soon inhabit.

And he does not sugarcoat it for Paul despite their close bond.

In “Dune,” Paul’s own mother has even begun preparing her son for conflict in the ways of her people.

Lady Jessica Antreides (Rebecca Ferguson, “Reminiscence”) has begun to teach Paul how to use his voice and his mind to make his adversaries bend to his will.

Ahead of the Antreides’ departure to the new planet, Paul’s close buddy Duncan Idaho (Jason Momoa, “Aquaman”) embarks on a trip to that planet to try to forge an alliance with the oppressed people of the land.

Paul begs to join Duncan because he has seen visions that warn him about the treachery that awaits the Antreides on the new planet.

And although Paul is made to wait on his trip to Arrakis, very few can slow him down from fulfilling his true purpose and the prophecy on his life.

That distinction is made because some science fiction movies have good intentions.

However, many of those come out on the cheesy end because of subpar graphics and storylines that are too weird.

While “Dune” is weird, it is eccentricities is what makes it stand out.

Although Hollywood has gotten a bad rap for becoming to formulaic and predictable, “Dune” bucks that trend and is extremely unique, in a good way.

The visuals in “Dune” are remarkable.

The action in “Dune” is splendid.

And the acting of the co-stars in “Dune” is impeccable.

But the secret weapon in “Dune” is the greatness of Chalamet.

The young star of films like “Hot Summer Nights” and “Interstellar” is one of the most talented young actors south of the age of 30-years-old.

Chalamet’s greatness is that he is not afraid to accept challenging roles and seemingly refuses to let people put him into any box.

The young thespian only seems to care about the art of portraying difficult and interesting characters.

Unfortunately, “Dune” might confuse someone who has not read the novel that the film is based on.

And just like the language of period pieces like “The Last Duel” might have moviegoers looking for a dictionary or a translator, despite the film being in English, “Dune” might make people look for a translator because the jargon used on the film that takes place in the far future might cause some to scratch their head.

“Dune” receives rating of three out of four crowns.