Film Review: ‘Cherry’ Depicts Man At War with Himself 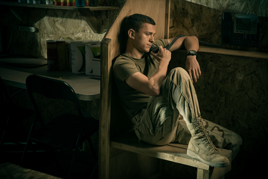 With “Cherry,” viewers will enjoy a hybrid type of film with a stellar dramatic performance by a superhero of an actor, Tom Holland (“Avengers: Infinity War”).

In “Cherry,” Holland delivers an emotional and empathetic performance as a young man struggling to find purpose in life, despite others seeing him as a war hero and despite having a lady in his life that loves him for better or worse.

Cherry, the titular character, has reached the age of maturity.

However, he has not truly figured out what he wants to do with his life or why he received life in the first place.

He has not figured out why a higher power, perhaps, put him on this planet to begin with.

However, he does not seem too pleased with any job he receives and he is not that good at them either.

Furthermore, he attends college but does not seem to like it at all.

It is as if he is pursuing a degree to make someone else happy and not himself.

Many parents encourage their children to attend college after high school because it seems like the logical decision.

Unfortunately, Cherry does not seem too sure that higher education is something worth pursuing considering he cannot figure out that thing called life.

Additionally, he does not have too many motivated friends to encourage him to figure out what he wants to do with life.

They cannot get their lives together either.

Therefore, how can they advise Cherry?

Although Cherry does have a girlfriend from high school, he still would love to get with the beautiful and alluring Emily.

After Emily initiates conversation with Cherry one day after class, and he has some technical difficulty with his current relationship, the two co-eds begin a courtship.

However, when Cherry blurts out these three words (as Stevie Wonder sang in “Jungle Fever”), Emily blurts out that she has decided to study abroad in Montreal, which effectively ends their blossoming relationship.

Since Emily makes a spontaneous and flippant decision to study in Montreal, Cherry decides to do the same, enlisting in the armed services.

Despite the criticism that he receives from Emily and his lazy and unmotivated friends, Cherry decides to enlist in the Army in hopes of becoming a medic.

But while many find purpose serving their country, Cherry finds even more despair and obviously death because he enters the military at a time of war for the country.

As a medic in the military, Cherry has to view the most gruesome of injuries.

He has to witness some of his compatriots blown to pieces and burned to death.

And Cherry has to deal with jerks for drill sergeants who seem to get paid by the insult.

During basic training, the drill sergeants bombard the new soldiers with every insult in the book, bordering on outright verbal abuse.

The abuse will remind many moviegoers of a certain age about the racial insults hurled directly into the camera by characters in Spike Lee’s 1989 classic, “Do The Right Thing.”

Moreover, Cherry’s tenure in the military made him and his fellow soldiers place too much emphasis on death, which cannot be healthy mentally and emotionally.

Other soldiers constantly talked about death.

Cherry witnessed a lot of death.

In addition, the soldiers got deployed to the “Triangle of Death” in the Middle East.

“Cherry” also has some elements of “Jersey Boys” as Cherry serves as a narrator of the film via talking directly into the camera like Tommy DeVito (Vincent Piazza) in “Jersey Boys” and via the more traditional voice over.

But that quirkiness and appropriation from other films gives “Cherry” its charm in the first half of the film, a film that lasts two hours and 20 minutes.

Sometimes, it feels like the first half of “Cherry” does not fit with the second half of the film.

However, that is beside the point because the performances are so brilliant and the hybrid nature of the film is unique.

Additionally, the first half of “Cherry” becomes enjoyable because many people can relate to navigating young love, trying to figure out what to do with one’s life and as a result trying to find meaning in life.

On the contrary, the second half of “Cherry” will tug at people’s hearts because of the trauma that soldiers endure fighting for their country, only to return home to deal with that pain with very little help.

He has nightmares and wakes up in cold sweats dreaming about the past horrors of war.

But instead of getting properly treated for his posttraumatic stress disorder, he gets drugs from Oxycontin to Xanax to heroin.

Unfortunately, drug addiction often leads to a life of crime as addicts search tirelessly for ways to support their destructive narcotics problem.

While many in society automatically look down on people with substance abuse problems, “Cherry” does a splendid job of depicting what leads many to abuse drugs and their subsequent efforts to break the chains of dependency.

It also negatively affects one’s personal life and causes those who love them to often lose respect for the addicts.

Unfortunately, the vivid portrayal of drug addiction might turn some off to “Cherry.”

Other than that, there is not much not to love about “Cherry” with its stellar performance by Holland and a stellar brand of hybrid filmmaking.