Film Review: ‘Chemical Hearts’ Heartfelt But Been Done Before 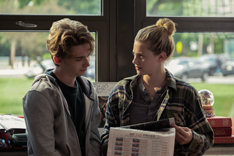 A person’s teenage years can become the most difficult to navigate.

The young person wants to fit in with his or her peers.

At the same time, a teenager’s parents can become very overbearing trying to dictate who their child will become.

At the same time, the teenager spends hours trying to figure out who he or she is and wants to be as a young adult.

The movie “Chemical Hearts” proves that one cannot overcome those trying years without a few scars or war wounds.

As Henry (Austin Abrams, “This is Us”) states in “Chemical Hearts,” adults are just scarred kids who were able to make it out of teenage limbo alive.

In “Chemical Hearts,” Henry Page definitely does not fit the description of a cool kid.

Henry always dreamed of becoming the editor of the high school newspaper during his senior year.

But like many high school athletes can attest, just when one has their starting spot secured on the varsity squad, a hotshot transfers in from another school or a young freshman phenom comes in from nowhere to take that coveted spot.

For her senior year, Grace Town (Lili Reinhart, “Hustlers” and “Charlie’s Angels”) transfers in from another school.

Since Grace possesses enormous creative talent like Henry, the high school newspaper instructor comes up with the plan to make Grace and Henry the co-editors of the newspaper.

Grace initially declines, choosing instead just to play a supporting role in the newspaper, which will publish a periodical quarterly during the school year.

The first three issues of the newspaper will feature the standard hard news stories, feature stories and sports articles.

However, the final edition to be published on the last day of the school year will allow the writers to scratch their creative itch and leave an indelible mark on their school, community and classmates.

From the jump, Grace does not fit in with the rest of her classmates in “Chemical Hearts.”

Because of crutches, Grace walks with a noticeable limp.

She does not socialize with any of her new classmates, and does not try at all to enjoy her senior year.

Her classmates constantly catch Grace doing peculiar things, which causes them to worry especially when she begins discussing the trend of suicide in the required reading list for a class.

Although Grace has access to a car, she chooses to walk miles on crutches to her residence.

Unlike Henry and the rest of the newspaper crew, she does not even try to take the one school bus that sits in the school parking lot everyday.

What makes Grace even more strange is the fact that when she allows Henry to walk home with her one day, she allows him to take a car in her driveway home because Henry lives a little farther from the school than Grace.

But instead of just dropping Henry off, Grace lets Henry drive the car to his house and she then just takes the keys from him and walks back home, leaving the car outside of Henry’s parents home.

In high school, many teenagers cannot wait for the chance to get a license and get their first car.

Grace has a car and a license.

However, she still prefers to walk home with crutches in obvious pain.

Although extremely odd, Grace and Henry’s walks and rides home create a bond that helps two socially awkward misfits navigate the most difficult days of their young life, which is becoming the young adults they were meant to be.

Henry has never had a girlfriend, and has never enjoyed much attention from the ladies.

On the other hand, Grace has had more life experiences.

Unfortunately, all life experiences are not enjoyable and all do not create fond memories.

Grace is hiding some devastating secrets in “Chemical Hearts” and it is up to Henry to grab enough of Grace’s heart to help mend it before the tragedies of the past totally consume her present and future.

In “Chemical Hearts,” Henry and Grace represent each other’s yin and yang.

Henry has a hard time expressing his doubts, pain and feelings verbally.

On the contrary, Grace has a difficult time expressing herself in writing.

However, if the two join forces then maybe they can make a difference for other youngsters trying to overcome teenage limbo just before the start of their young adulthood.

“Chemical Hearts” does not have an interesting enough storyline to sustain the entire picture.

Hollywood has covered the issue of teenage angst and awkwardness repeatedly.

But what “Chemical Hearts” does possess in large amounts are heartfelt performances by Reinhart and Abrams.

While Grace comes off as a weirdo and social misfit, “Chemical Hearts” does a splendid job of explaining why she behaves in such a way.

In high school, troubled teenagers are everywhere on a campus.

Although many teenagers will poke fun about the different kids and gossip about them, how many actually dig deeper below the surface to find out why they act the way that they do?

Do they come from a dysfunctional home?

Have they experienced unthinkable tragedy at such a young age?

Do they have a substance abuse problem caused by some of the possible aforementioned problems?

If they do have troubles in their life, how many peers are willing to look beyond the faults to form a lasting bond and friendship?

But with the right people in one’s circle, kids can overcome that teenage limbo.