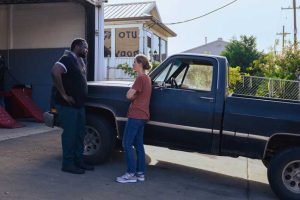 Many people are trying to escape something from their past.

Other people often try to reclaim something from their past or relive the good ole days.

As a result, “Causeway” shows how bonding with someone who cares for you and understands you can help heal the deepest wounds, which are often hidden beyond the surface of a carefully-constructed façade.

She escaped a rough upbringing in New Orleans.

Lynsey then joins the military, serving her country on the battlefields of Afghanistan.

However, when an IED severely injures her body and her brain, it will take a heroic and Herculean effort to help her get back to the person she was before she left the “Big Easy.”

Although Lynsey desperately wants to make it back to the battlefield to serve with her brothers and sisters, she first must endure a grueling rehabilitation just to live a normal life.

Furthermore, Lynsey must get the approval of neurologist Dr. Lucas (Stephen McKinley Henderson) to return to combat, which might prove more difficult than she thinks, even if she tries to hide her wounds beneath the surface.

Unfortunately, in “Causeway,” Lynsey must return to the people and town she has tried to escape for years.

As a result, she not only has to deal with the scars she endured on the battlefield.

In “Causeway,” she also must deal with the scars from childhood that she thought she overcame, and left behind, years ago.

First and foremost, do not watch “Causeway” if you want to see action.

Viewers will not see the IED explode in Afghanistan.

Those who view “Causeway” will not see the childhood trauma that Lynsey had to overcome.

However, “Causeway” does depict the intricacies of relationships and friendships.

Furthermore, “Causeway” will show the power of humanity and the power of commonalities as people who have nothing in common on the outside bond and become family because of what they have experienced on the inside.

In “Causeway,” when Lynsey brings in her truck for repairs, she strikes up a friendship with auto mechanic James (Brian Tyree Henry) that would seem strange and out of place to a cynical society preoccupied with what’s on the outside, as opposed to what is beneath the surface.

Lynsey and James discover that they know someone in common.

This person is close to James.

However, Lynsey only knew the person in passing because of her career as a high school basketball player at the famed Newman High School in New Orleans.

What initially begins as James offering favors to Lynsey to help her get back on her feet becomes something deeper as the two begin to share more of themselves with each other.

Early on, it is obvious to James that Lynsey is struggling with something that she does not want the world to know.

However, James’ struggles are less obvious to Lynsey.

Sure, James walks with a limp.

But to Lynsey, it seems that James has his life in order.

In “Causeway,” James has a great job doing what he loves.

He even advises Lynsey to keep her truck, which she sees as just an old jalopy.

However, beneath the rough exterior of the truck, James sees a great automobile.

Lynsey sees that James also has a big and beautiful home.

Additionally, he drives an old school Mercedes Benz, which he has restored to the point that it looks almost new.

But just because James tries to be a listening ear and helping hand to Lynsey does not mean that he does not have his own demons that he must wrestle with every day for the rest of his natural life.

In “Causeway,” James has his own family issues.

Therefore, James and Lynsey become the family each other chooses when the family God gives them no longer can provide them what they need in life.

In “Causeway,” Lawrence is her usual brilliant self as an actress.

Nothing will ever be up to the level of her performance in “Silver Linings Playbook.”

But that does not mean she does not handle her business in “Causeway.”

Lynsey once was an able body young person, a hero in fact.

Although the movie “Causeway” shows that there is a cause of people’s pain.

The movie also shows that there is a way out of that pain with the right attitude and the right support system around.

Even though Lawrence is the more household name in “Causeway,” true movie lovers will know of the brilliance of Henry.

He does his thing in every role that he gets.

Therefore, his performance in “Causeway” is no different.

In “Causeway,” Henry has a noise or a grunt that often says more than his dialogue.

But despite the performances of Henry and Lawrence, “Causeway” does not get New Orleans 100 percent correct.

Sure, the movie contains some of the music and some of the iconic buildings like the Superdome.

However, “Causeway” does not have the classic “Crescent City” accent.

Regardless, it does have a relatable story that will resonate because many people have a past that they are trying to escape or one that was so good that they continue to try to recreate it.