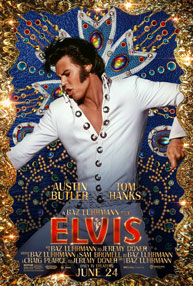 One word can describe “Elvis,” and that is phenomenal.

Austin Butler (“Once Upon a Time…In Hollywood”) who stars in the titular role gives the best performance of the year, thus far.

Nevertheless, watching the film still made me uneasy because of all the rumors that I heard about the so-called “King of Rock & Roll” throughout my life.

Admittedly, he became famous singing “Black music” and showing the charisma that many African-Americans had shown for years but to less fanfare.

Like current White pop stars Justin Timberlake, Eminem and Jack Harlow, Presley achieved mainstream success that eludes many African-American artists of equal or more talent possibly because, as the late comedian Paul Mooney would say, they have the complexion for the protection.

But while artists like Timberlake and Harlow receive criticism for appropriating Black culture, they probably have not endured generations-old rumors of being a racist.

The rumors are so well-known that Chuck D of Public Enemy called Presley a racist on “Fight the Power,” despite having a more nuanced view of Presley now.

Quincy Jones refused to work with Presley because he considered him racist.

And Mary J. Blige did not want to sing one of his songs because of alleged racist views.

Many in the African-American community believe Presley said that the only thing a Negro was good for is shining his shoes and buying his records.

That rumor alone has kept many in the African-American community from celebrating his undeniable talent and might actually prevent many from paying to see “Elvis.”

It definitely stopped this critic from visiting Graceland the one time that I visited Memphis, Tenn.

However, Presley told Jet magazine that he never said those words in an interview.

History shows he never even gave interviews to the media outlets that people say the quote comes from.

As a result, when many African-Americans do see “Elvis,” they may be surprised at the portrayal of Presley.

Those unfamiliar with his real story, will see a poor White kid who grew up surrounded by African-American playmates.

Moviegoers will see a young Presley fascinated with “Black music” and the “Black church.”

Viewers of “Elvis” will see one of the first true musical icons of the 20th century always giving credit to African-American performers who influenced him like B.B. King (Kelvin Harrison Jr., “Waves”) and Fats Domino.

They will see Presley giving the Sweet Inspirations, which included Whitney Houston’s mother Cissy Houston (played by Princess Mariama Andrews), the opportunity to shine in front of large audiences in Las Vegas.

They will see the movie pay homage to The Jacksons who had their own Las Vegas show while Presley was tearing up the stages of “Sin City.”

But viewers will not see “Elvis” tackle the controversy and rumors head on, which would have done wonders for his polarizing reputation in the African-American community.

Casting those rumors aside for the final time, while showcasing Presley’s rags to riches and almost back to rags story, would have humanized Presley in a more remarkable way.

And how could it not?

Many people can relate to pulling themselves up from their bootstraps, as they say, only to see people trying to bring them down.

Additionally, lower-income neighborhoods are filled with talented people who bust their behinds so that they can provide a better life for their parents and that is ultimately his story.

That story resonates with people of all backgrounds, cultures, religions, ethnicities and races.

Additionally, music fans, regardless of what genre of music they like, have heard countless horror stories of talented artists getting ripped off by unscrupulous business managers, agents and/or lawyers.

In “Elvis,” Presley’s talents are breathtaking.

While many people saw potential in him, Colonel Tom Parker (Tom Hanks) saw a goldmine.

Like stars that followed from the Jackson 5 to New Kids on the Block, the Colonel marketed the heck out of Presley’s name, image and likeness.

The musician not only made hit songs, but his face appeared on every product imaginable.

But what goes up, inevitably comes down as Presley’s popularity and riches begin to fade for various reasons as the years pass by.

Cinematically, “Elvis” might remind some of “Get On Up” because of its flashbacks and sometimes disjointed approach.

No movie critic has to praise Hanks because his greatness is a given.

But when a lovable actor makes moviegoers despise his character, then he has done a remarkable job.

Therefore, it would not surprise this movie critic to see Hanks and Butler receiving nominations for Best Supporting Actor and Best Actor Oscars in 2023, respectively.

But for many, the run time of two hours and 39 minutes might be a turn off.

However, the time frame is needed for “Elvis” because his story is too intense to be contained to the customary two hours.

Furthermore, the time runs by quickly and does not contain any unnecessary scenes or storylines.

Unfortunately, “Elvis” does not include the racist rumors as part of the storyline and that is a shame because it would have answered many questions for those who might become fans.

Despite the omission, nothing can stop the star-making performance by the phenomenal Butler.

And rumors should not prevent anyone from seeing this remarkable film.