Film Review: ‘Boys State’ Shows All Not Lost When it Comes to Political Compromise 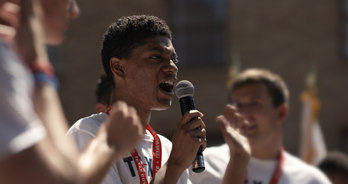 And Children Shall Lead Them

In the Bible, Isaiah 11:6 reads, “The wolf also shall dwell with the lamb, the leopard shall lie down with the young goat, the calf and the young lion and the fatling together; and a little child shall lead them.”

That Bible scripture can sum up American politics with all of the wolves in sheep’s clothing and very few actually looking out for the common man.

But in the splendid documentary “Boys State,” the future of politics might not stay so grim and divisive if some idealistic youngsters, with compassion for their fellow man, can one day defeat the power hungry status quo.

Boys State has occurred for decades across this great country.

Who could forget that iconic picture of a teenager named William Jefferson Clinton shaking the hand of then President John F. Kennedy?

Additionally, Boys State camp has had other famous alums come through their ranks over the years.

Politicians and political powerbrokers like former Vice President Dick Cheney and Rep. Cory Booker (D-N.J.) all came through Boys State during their boyhood.

The purpose of Boys State camp is to gather talented teenagers with a future in politics, and get them to create their own state government, from fictitious political parties to party leaders and possibly fictitious state officials like Boys State governor and lieutenant governor.

In the documentary, Boys State will also elect a Senate and a House of Representatives while passing bills during their stay in Austin, Texas.

The boys get split into two political parties, the Nationalists and the Federalists.

The parties have to create their own platform and nominate their own candidates for elected positions in Boys State.

That task might not sound hard for some political states, especially those of a purple hue.

But for states like Texas, who have long stayed true to Republican red and conservatism, compromise might become difficult for a younger generation with more progressive young people.

Steven Garza epitomizes the progressive politics of the young generation.

His mother immigrated to America from Mexico.

He grew up in a small Texas town before moving to Houston.

Steven has his idea of how the world should operate and he does not mind speaking up for his beliefs.

He participated in March For Our Lives, which protested for comprehensive gun control reform after the deadly mass murder at Marjory Stoneman Douglas High School in Parkland, Fla.

While such youthful activism might receive applause in liberal and moderate states, in Texas fighting for more gun control might have you fighting for your life, or at least your reputation in political circles.

Steven wants to run for governor of Boys State as a member of the Nationalist Party.

On the opposite end of the political spectrum sits Ben Feinstein, a true conservative similar to former President Ronald Reagan.

Ben has no room for excuses in life because he has succeeded in his young life despite having both of his legs amputated and having one arm and hand disfigured.

He walks with prosthetics.

However, Ben refuses to let his predicament slow him down.

Because Ben has succeeded thus far in life, he believes that people who complain about racism and discrimination have succumbed to excuses.

Ben belongs to a loud group of young Texas conservatives from Boys State camp that has convened in Austin, Texas to champion God, guns and limited government.

However, can the empathy of someone like Steven have an impact on those who lean to the far right?

Or will Steven realize that some ideas, while admirable, might not be too practical in the rough and tumble world of Texas politics.

The documentary “Boys State” shines because it depicts that compassionate conservatism that former President George W. Bush championed in 2000 as he ran for the White House from the governor’s mansion in Austin, Texas.

While conservatism now sometimes means dismissing liberal ideologies without much consideration, compassionate conservatism saw the humanity in one’s political opponent and tried to avoid seeing the left as a total enemy.

On the other hand, “Boys State” also showcases the counterpart of compassionate conservatism, loving liberalism.

Over the years, the left has often championed tolerance when it came to issues like abortion and same sex marriage.

But often liberals do not show much tolerance for people who might disagree with their stances on abortion and same sex marriage because of religious convictions.

Often people on the right who have strong religious convictions get labeled as bigots simply because they stay true to their beliefs.

However, in “Boys State,” Rene Otero who is progressive does not hate his conservative counterparts despite disagreeing with them on some hot-button issues.

Rene is strong in his liberal ideologies despite being surrounded by conservatives.

Despite not being popular amongst the politicians of Boys State, Rene still manages to find the discord humorous.

He even admits that he has never seen so many White people in his entire life.

But while “Boys State” still offers hope for the future of politics, especially in Texas, the documentary shows that some of the youngsters from the Lone Star State still make for great politicians.

And as Rene said in “Boys State,” being a great politician is not necessarily a good thing.

And some members of the “Boys State” cast have a lot to learn about race, social class, empathy and compromise.

Hopefully, some of the boys from “Boys State” will mature before they become 1 Corinthians 13:11 men and leaders in the political game.

“Boys State” is available for streaming on Apple TV+ on Aug. 14.