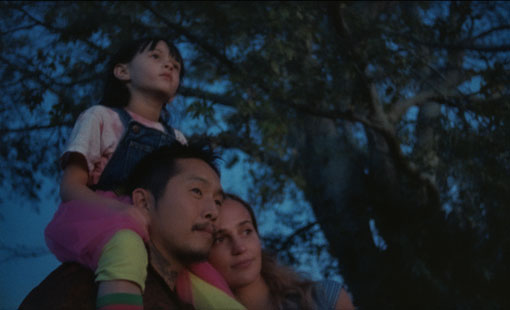 In 2021, Hollywood has really captured the temperature of current events when it comes to the trials and tribulations of the Asian-American community, as well as the troubles that confront the immigrant community.

And although the journalism profession can cast a bright spotlight on the plight of immigrants, a Hollywood feature film often has a deeper impact because a two-hour film can really humanize a person or a situation in a way that a five-minute news segment cannot.

Thanks to magnificent performances, “Blue Bayou” delivers a brilliant and heart-wrenching depiction of what immigrant families endure through no fault of their own.

As a result, it might be impossible to leave the theater after watching “Blue Bayou” and not be moved by the award-worthy performances of Justin Chon (“Twilight”) and Alicia Vikander (“Burnt”).

In “Blue Bayou,” Antonio (Chon) is the typical man trying to take care of his family.

But like many men, Antonio has a lot of baggage that he just suppresses, often to his detriment.

Antonio has dark secrets that he wants to keep buried even though his wife Kathy (Vikander) desperately wants to be there to help Antonio, no matter what problems he must deal with.

He has a wife, a stepdaughter named Jessie (Sydney Kowalske) who sees Antonio as her actual father and a biological child on the way.

But while most of Antonio’s homelife is copasetic, his work life is in shambles because of mistakes that he made as a younger man.

Antonio has a gig as a tattoo artist.

But with a second child joining the family soon, Antonio knows he must pick up another job just to help his wife, who works as a nurse, make ends meet.

Antonio attempts to get a job fixing motorcycles.

However, when the potential employer asks Antonio about his criminal record, he must come clean that he has a criminal record for stealing motorcycles.

And like many minority men with a criminal record, Antonio gets no love from the employer despite living an honest life for years.

Despite his struggles in the workforce, Antonio still has the love from Kathy and Jessie to give him hope for the future.

In fact, the only person really worrying about the family’s homelife is Jessie because she thinks that Antonio will not have time for her once he has his own biological child to take care of.

Although Antonio assures Jessie that her Daddy is not going anywhere and will always have time for her, he does believe that Jessie needs to spend time with her actual biological father Ace (Mark O’Brien, “Marriage Story”), a New Orleans police officer.

Kathy makes it clear to Antonio that she cannot make Jessie spend time with Ace if she does not want to.

Furthermore, Kathy tells Antonio that Jessie does not like spending time with Ace because he scares her.

Nevertheless, that does not stop Antonio, as well as Ace, from trying to help Jessie establish some sort of relationship with her biological father.

As fate would have it, when Antonio and Kathy have a rare argument in public, Ace and his partner with the New Orleans Police Department happened to be on the scene.

A normal argument between a married couple becomes something much more because of the familial dynamics between Ace, Kathy and Jessie.

As a result of the argument and ensuing confrontation by New Orleans’ finest, Antonio finds himself behind bars.

Unfortunately, when Kathy goes to the jailhouse to bail her husband out, she is informed that Antonio has been taken into to custody by ICE because he is an undocumented immigrant.

Like so many, Antonio came to America at an early age, because of the decision of his parents.

Antonio has lived in Louisiana so long that his roots are Cajun, not having any connection to ancestral land or his biological family.

Unfortunately, his White adoptive parents from St. Francisville, La. did not file the proper paperwork to make Antonio a United States citizen.

And to make matters worse, his adoptive parents are dead.

Additionally, Kathy and Antonio never filed the proper paperwork for him to become a United States citizen after they married years earlier.

Therefore, there are no people to vouch for Antonio’s right to stay in America.

As a result, Antonio faces the reality of being deported back to Asia and having to leave his wife and children behind in the States.

To add insult to injury, because Antonio cannot get a decent job because of his criminal record, he might catch hell paying for a lawyer, although he has a potential attorney (Vondie Curtis-Hall) that believes he has a slim chance of staying in the country.

The dilemma surrounding “Blue Bayou” is who has the best standout performance, Chon, Vikander or Kowalske.

In “Blue Bayou,” Chon depicts Antonio with a realness that will resonate with anyone with a heart.

Only heartless individuals will not empathize with a man desperately trying to take care of his family and keep that family together.

Furthermore, Chon does not try to overdo that famous Louisiana accent.

He gets the accent just about right.

Kowalske is absolutely precious as Jessie in “Blue Bayou.”

And Vikander is an emotional wreck when she begins to think that her family could get separated in “Blue Bayou.”

Unfortunately for some, “Blue Bayou” might become a little too emotional.

But that is the beauty of Hollywood when they get it right.

Art should imitate life, no matter how divisive and painful it becomes.