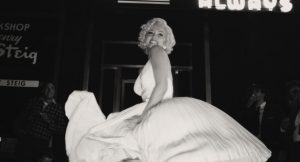 Like many people, Marilyn Monroe has always intrigued me.

I do not profess to be an expert on her life.

But her rise to fame and tragic demise still garners attention 60 years later.

So, while I know it is based on a fictionalized reimagining of her life, the Netflix biopic “Blonde” presents Monroe as a truly tragic figure that made the most of a sad and heartbreaking life.

Furthermore, “Blonde” is shot in such an unorthodox and old school vintage way, that it will stand out from many “biopics” over the last few years.

Unfortunately, her upbringing in “Blonde” will recall poet Langston Hughes when he wrote life for him had been no crystal stair.

Norma Jeane’s (aka Marilyn) mother has some mental health struggles, and she never knows who her dad is.

Her mother tells her that her father is some very important figure that had to leave their lives because of his stature in life.

And because of his station in life, she cannot utter his name or say where he is.

Nevertheless, Marilyn’s mother places a portrait of her father over her bed so that she will know him when he does return to their lives.

Fortunately, or unfortunately, Norma Jeane (Ana de Armas) uses all the pain that she has experienced in her life and channels it into a career as a Hollywood starlet.

Rechristening herself as Marilyn Monroe, Norma Jeane becomes one of the biggest sex symbols of the 20th century, seducing everyone from baseball icons to presidents and becoming the fantasy of millions of men around the globe.

However, in “Blonde” all the fame and fortune cannot mask the void in her life caused by the absence of her parents.

In that regard, “Blonde” becomes a cautionary tale.

On an episode of TV One’s docuseries “Unsung,” one of David Ruffin’s (of The Temptations) daughters spoke about her father’s troubled upbringing.

She said that her father needed love.

But instead, Ruffin got fame.

The problem with fame and money, especially when one is young and vulnerable, is that it amplifies one’s problems, which makes it harder to correct those problems and fill those voids.

That is exactly what happens to Marilyn in “Blonde,” but on a much larger scale.

The fame brings out her demons.

And those demons lead to drug addiction, alcohol abuse and sexual promiscuity.

Her marriage to The Ex-Athlete (Bobby Cannavale) is presented in a physical way.

Her marriage to The Playwright (Adrien Brody) is filled with more stability, but still experiences its heartache.

In “Blonde,” Marilyn’s fling with The President (Caspar Phillipson) is presented in a pornographic way.

While presented in salacious way, “Blonde” will cause many historians of Monroe to speak out on the accuracy or inaccuracy and many novices, like myself, to head to Google to verify some accounts presented in the Netflix movie.

But a movie is a movie.

And novel is a novel.

The movie is based on a novel.

Therefore, movie viewers should not expect an encyclopedia or authorized biography when they stream “Blonde” on Netflix or watch it in selected theaters.

“Blonde” should stand out because of the film noir feel that the black-and-white cinematography gives the movie.

And de Armas definitely pulls off Monroe’s look as best as possible.

She even pulls off the soft and seductive tone of voice that Monroe was known for during her brief career.

Unfortunately, some of the black-and-white scenes have some cartoonish qualities to them with fans at red carpet events looking awkward with their mouths agape.

But that mistake does not totally take away from the cinematography of “Blonde.”

Audiences will also marvel about the psychology and the mind state of the characters like Marilyn and The Ex-Athlete.

In “Blonde,” Marilyn spends her entire adult life and career looking for a man to fill the emptiness left by her absentee father.

However, the love she did not receive from her father never comes in the form of another man, leaving her more agonized than before.

Furthermore, “Blonde” explores the psychology and mind state of many men in the character, The Ex-Athlete.

Many men want that trophy wife that other men adore but cannot have.

However, when they get that woman who physically is the woman of their dreams, they are left wanting more when that woman does not behave in the way that many men believe wives should.

Many men like Th Ex-Athlete want a woman that is enticing and sexy before marriage.

However, once married they want that woman to eliminate all the sex appeal and appear like a demure housewife.

When that does not happen, it often leads to volatility in the marriage.

Unfortunately, “Blonde” is entirely too long.

Therefore, streaming it at home might be more preferable than viewing it in theaters.

Furthermore, the NC-17 rating, because of the sexual nature of the film, might turn off some viewers too.

Regardless, “Blonde” will leave many novices intrigued and wanting to know more about a once-in-a-generation celebrity that could not overcome her past and demons despite reaching the pinnacle of Hollywood success.