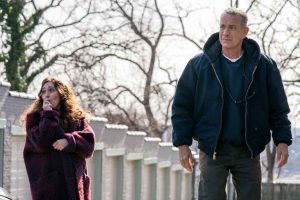 Do you believe in angels?

Do you think some people come into your life out of nowhere to guide you through the dark days and help you escape catastrophe?

Regardless of your religious affiliation or lack thereof, Tom Hanks’ new film “A Man Called Otto” is a relatable tale about family not always being limited to blood and how those “family” members can become like angels on Earth.

In “A Man Called Otto,” the character Otto (Hanks) is one angry “mofo.”

Some “genius” appointed him neighborhood watch.

He is adamantly against people without a parking permit driving through his neighborhood, which is actually a community of townhouses or condominiums.

Otto does not even like when UPS drivers without a permit park in front of the condos.

So, why can’t UPS do the same?

Otto hates when people let their animals poop on the grass.

He hates the real estate company that is determined to give his neighborhood an extreme makeover.

Otto hates his job so much that he has decided to retire.

Although he has received a generous severance package, he hates the fact that the person he trained has now become his supervisor.

Many in corporate American can relate to that type of disrespect.

Therefore, when the company tries to throw him a retirement party, it is not the festive occasion they assumed it would be.

In “A Man Called Otto,” the titular character is wound so tight that when he attempts to turn off his phone, lights and gas, he quibbles with the customer service reps about the extra pennies he has to spend even though he will not be using their services.

Otto argues with the employees at the Busy Beaver hardware store who want to charge him for six inches of rope even though he is only purchasing five inches of rope.

The computers at the Busy Beaver only recognize rope in yards.

Although the difference is only approximately 30 cents and another customer offers to give Otto the pennies, it is the principle of the whole thing.

Like Big Worm (Faizon Love) from “Friday” would say, it’s the principality of the thing.

In “A Man Called Otto,” Hanks’ character has just become fed up with life and has no time for anyone whatsoever.

Therefore, when some bubbly new neighbors move into the community, their sunshine-like spirit is like pouring salt on an open wound for a grumpy old man like Otto.

In “A Man Called Otto,” Marisol (Marina Trevino), her husband Tommy (Manuel Garcia-Rulfo) and their daughters Luna (Christiana Montoya) and Abbie (Alessandra Perez) do not care about Otto’s grumpy ways.

Despite Otto’s mercurial and temperamental nature, the new family on the block refuse to not like him.

The new neighbors keep their jovial personality and neighborly ways even if Otto is determined to stay bitter.

In “A Man Called Otto,” the new neighbors have become such a thorn in Otto’s side, that every time he tries to do something that he really wants or needs to do, they unceremoniously interrupt his endeavors.

But sometimes pains-in-the-you-know-what’s can become the biggest blessings in the world.

And one blessing can turn a person’s entire perspective and their whole life around.

Just when a person has fallen to the lowest of lows, the most unlikely angels can be just the people to lift that person up and get their life back on track.

The biggest lesson learned from “A Man Called Otto” is that there is a reason why people act the way they act.

It is easy for people to not like people.

It is easy for people to call other people names like idiots or jerks.

Although some of those names might be warranted at times, there is usually an understandable and relatable reason why people act like idiots and jerks.

And once people pull back the layers, they might find a good person beneath the rough and tough exterior.

In “A Man Called Otto,” the proverbial fight between the light-hearted Marisol and the ornery Otto makes the movie shine.

Although Otto’s anger usually helps him defeat all his imaginary opponents, his anger is no match for the always-happy, Marisol.

The children also have an effect that children often have on adults.

Even during the darkest times, children have the innocent spirit that makes their elders forget about the cares of the world that often hold people down like a heavy weight.

Additionally, “A Man Called Otto” shines because of the flashback scenes that gives more depth to Otto’s backstory and upbringing.

Otto’s backstory gradually turns Otto from a villain to a sympathetic figure.

But “A Man Called Otto” obviously receives its luster from the Academy Award winning Hanks.

No, “A Man Called Otto” is nowhere remotely close to Hanks’ best work like “Forrest Gump” and “Philadelphia.”

But his greatness comes through in every performance because it is Hanks after all.

The bitterness of Otto can get old and stale throughout “A Man Called Otto.”

But just when moviegoers least expect it, something angelic happens in the form of regular human beings.