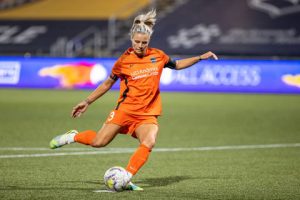 Women’s soccer players have fought for years to receive equal pay with their male counterparts.

But those fighting for equal pay for United States women’s soccer players finally won the match of their lives.

On Feb. 22, the national governing board that oversees the women’s national soccer team agreed to a settlement with players that includes a multimillion payout to players and a pledge by the board to pay men’s and women’s soccer players equally.

Andrew Das of The New York Times wrote, “Perhaps more notable than the payment, though—at least, for the players—is U.S. Soccer’s pledge to equalize pay between the men’s and women’s national teams in all competitions, including the World Cup, in the teams’ next collective bargaining agreements. That gap was once seen as an unbridgeable divide preventing any sort of settlement; if it is closed by the federation in negotiations with both teams, the change could funnel millions of dollars to a new generation of women’s players.”

The deal is predicated on whether a new contract between the women’s player’s union and U.S. Soccer gets ratified.

Das reported, “The process could take months. The men’s and women’s teams have already held joint negotiating sessions with U.S. Soccer, but to make the deal work—the federation is seeking a single collective bargaining agreement that covers both national teams—the men’s players association will have to agree to share, or surrender, millions of dollars in potential World Cup payments from FIFA, world soccer’s governing body. Those payments, set by FIFA and exponentially larger for the men’s World Cup than the corresponding women’s tournament, are at the heart of the equal pay divide.”

Upon completion of the contract, all remaining claims from the 2019 gender discrimination lawsuit will become resolved.

Despite the settlement, the long legal battle has done damage to the reputation of U.S. Soccer who have lost sponsors and lost the respect of some of its star players like Megan Rapinoe, Alex Morgan and Carli Lloyd, a former star player for the Houston Dash of the NWSL.

Das wrote, “Soccer was under no obligation to settle with the women’s team; a federal judge in 2020 had dismissed the players’ equal pay arguments, stripping them of nearly all of their legal leverage, and the players’ appeal was not certain to succeed.”

Morgan called the settlement “a monumental win for us, and for women.”

The union said, “Although the settlement reached (on Feb. 22) is an incredible success, much work remains to be done.”

While the U.S. lawsuit dragged on in court, countries like Norway, the Netherlands and Australia had already pledged to close the wage gap between women’s and men’s soccer players.

The fight for equal pay for women’s soccer players began approximately six years ago when Morgan, Lloyd, Rapinoe, Hope Solo along with Becky Sauerbrunn filed a complaint against the Equal Employment Opportunity Commission claiming they only received 40 percent of what their male counterparts earned.

On top of that, the women’s soccer team had achieved greater success in international soccer competition winning the Olympics and the World Cup.

Solo said, “The numbers speak for themselves.”

The retired superstar goalie continued, by stating that men “get paid more to just show up than we get paid to win major championships.”

Critics of equal pay were not necessarily persuaded by the argument about women deserving equal pay based on success on the field because many believed that since the men brought in more revenue and higher television ratings, they deserved more of the profits.

The differing views eventually spilled out into the media with people voicing their displeasure to the world.

Das wrote, “The federation won a ruling that blocked players from boycotting the 2016 Olympics while they pressed for new contracts, but only after an embarrassing gaffe in which one of its court filings failed to redact the home addresses and personal email accounts of about two dozen top players.”

Despite the settlement, Rapinoe still has her guard up.

She said, “There’s no real justice in this other than this never happening again. With the settlement of the working conditions and this settlement which is contingent upon a CBA that will have equal paying going forward, there’s no other way to look at it than just a monumental win for women’s sports and women’s soccer, in particular.”

In a statement, the union said, “The USWNTPA congratulates the players and their litigation team on their historic success in fighting decades of discrimination perpetuated by the U.S. Soccer Federation. Although the settlement reached today is an incredible success, much work remains to be done.”