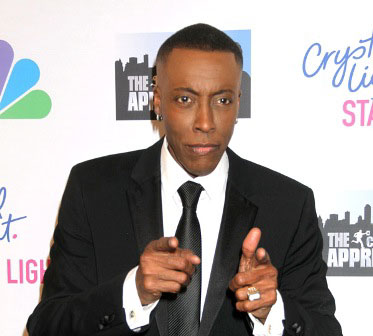 Arsenio Hall is bringing the dog pound back to late night television in 2013.

“California’s economy is so bad a TV network might give a talk show to a Black guy again,” said Arsenio Hall in a “How Broke is California” sketch with Jay Leno on “The Tonight Show” in May.

The 56-year-old comedian has signed on to host a new late night talk show in 2013.

CBS Television Distribution in partnership with Tribune Broadcasting has given Hall the green light to develop the syndicated late-night talk show. The show will air on 17 Tribune stations across the country.

“It’s an amazing feeling to be going HOME to my old friends and colleagues and firing up our ‘Night Thing,’” Hall commented.  “Let’s get busy…AGAIN!”

Riding on a wave of appearances after being crowned the winner of Donald Trump’s “Celebrity Apprentice,” Hall had hinted at possibly returning to TV.

“The bottom line is, if Paramount wants me, I will go right back there and pick up where I left off,” Hall told “Entertainment Weekly.”

“His presentation was a lot different compared to talk shows we were use to watching,” says Robin K. Johnson, 42, of Houston. “We’re [African-Americans] not a major factor in mainstream in regards to TV shows. [On Arsenio Hall’s late night talk show] you got to see different acts you wouldn’t see—he gave air to Snoop Dogg. He opened that hip-hop genre up to the world.”

A world Johnson would like to see reintroduced on late night TV, and he’s made it his personal goal by creating a Facebook group page called “Oprah give Arsenio Hall a Talk Show on OWN.”

“I started e-mailing 2,000 friends. I sent tweets to OWN TV,” Johnson reveals. “Arsenio being on OWN would help it out.”

And for the past several years late night talk shows had only two major players left standing: Jay Leno and David Letterman, while other popular comedians such as Mo’Nique, Wanda Sykes, D.L. Hughley and Chris Rock have all failed at the late night TV show gig.

“Well, I think he’s [Arsenio] more genuine,” says Mike Savage, 39, of Highlandtown, Md. “He’s more funny than they were. All they did was try to copy off what he did. He was the only one that had Bill Clinton on there playing the saxophone.”

Johnson credits Hall’s ability to switch from being comical to sober as to what set him apart from his contemporaries.

“Arsenio is not just a comedian, he’s in tune with his political side,” says Johnson. “He can talk to [the] First Lady of the United States on their level. [If FLOTUS was on comedian] Mo’Nique’s [late night talk] show there would still be comedy; she’d joke around the issues. When Bill Clinton was on he talked about issues, and Arsenio made him feel comfortable, [other hosts] would make a spectacle of a serious opportunity.”

Herman Gray, sociology professor at University of California, Santa Cruz, says Hall’s comeback can yield some success depending on what niche he’s filling.

“The measure of his success will be how he pitches the show; the ways in which he’s able to bring different audiences together,” says Gray, author of Watching Race: Television and the Struggle for Blackness.

Gray believes that’s a lot pressure for one host when networks should aim for a variety of voices on TV.

“I would like to see a broader range of different kinds of voices, including his [Hall’s],” says Gray. [George] Lopez, Hughley, Wanda Sykes, all on [TV] at the same time bidding and pressing for multiplicity of these shows, instead of one person being one thing for all people.”

An ambitious goal for a late night talk show landscape Gray refers to as “white space” because it has all the ingredients of a traditional late night show on network TV: a White male host.

“These are the contenders for occupying that space,” explains Gray. It’s resistant to diversity.”

Marc Berman, Editor-in-Chief of TV Media Insights, a website dedicated to TV news, says there is room for a fresh voice at the late night talk show table, even if it’s one we’ve heard before.

“I think this is a very good idea,” Berman writes on his Facebook page. “Arsenio was a big hit way back when, he exited prematurely, and aren’t we all just plain tired with Jay Leno and Letterman?”