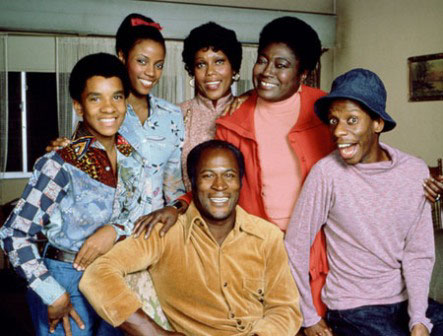 John Amos’ (seated) role as James Evans on “Good Times” is number one on our list of best TV dads of all time (BlackTopTens.com).

Fatherhood and Diversity on Television: Make Room for Black Fathers

Iconic television shows such as “Father Knows Best” and “Make Room for Daddy” gave American viewers a singular view about the best TV dads and the look of fathers on small screens.

It wasn’t until 1968, with the break-out show, “Julia,” did viewers really know if Black people on television shows had families.

The few Black actors or actresses on television were usually in service to a White family as a maid, chauffeur, nurse, sidekick, etc. Even “Julia” revolved around a single, female head of household.  No Black father figure.

This profile will highlight Regal’s list of the best TV dads and their importance to our culture and the television generation.

Sadly, most of these shows are no longer on the air, but the memories of our best TV dads still linger and their importance is still evident.

According to BlackTopTens.com and popular blogger IAMDOMO.com, the top honor for best TV dads goes to James Evans played by John Amos on the comedy show “Good Times.”

Amos played his blue collar character with assurance and maintained his “head of household” persona despite the many challenges the family faced living in the projects. He always had a straight forward – and stern hand when necessary – approach with his children and open communication with his wife in “good times” and bad.

The ending was not always neatly tied up, but through it all they were in it together.  This role smacked in the face of the stereotypical perception of Black fathers who are so often labeled “dead beat.”

Bringing in a new genre to Black TV fathers was the landmark portrayal, according to television standards, of Bill Cosby as Dr. Heathcliff Huxtable on “The Cosby Show.”

Because of the great portrayal by Amos, who proved that Black fathers did stay in the home – even in the projects – someone had to show the international viewing public that all Blacks did not live in the projects.

Cosby was one of the best TV dads because he highlighted the professional father in New York’s middle to upper middle class bracket with a professional wife and children who were exposed to culture and the arts.

His portrayal may have seemed playful and silly at times, but he was dedicated to his family, supportive of his wife’s career and the choices his children made.

Lessons were learned even with the bad choices, and dad was there for the laughs at times, but always the support.

Cosby’s role highlighted a Black man who was comfortable performing his craft or perfecting a meal.  Also, this show provided an outlet for many talented older Black performers to be exposed to a younger generation including the legendary Lena Horne.

We would be remiss in light of the high divorce/separation rates if we did not recognize a significant single father figure on our best TV dads list.

Malik Yoba on “New York Undercover” played single father Detective J.C. Williams and he emphasized the importance of being involved with his son whom he’d had as a teenager.

Despite not being married to the mother, he still maintained a strong connection with his son and was involved with his life.  “New York Undercover” was another groundbreaking show because it was the first police drama to have two people of color in the starring roles.

The year was 1994.  There was buzz that began in 2010 about the show being revived largely due to Yoba’s influence.

As our best TV dads review continues, we travel to the west coast on the rap beat of Will Smith whose character is removed from the “hood” to the “Hills” – Beverly Hills that is – to live in the mansion owned by his uncle, prominent attorney Phillip Banks played admirably by James Avery on the hit show “The Fresh Prince of Bel Air.”

Clearly, a good provider, Avery’s character relished all the trappings of his surroundings and took the brunt of Smith weight jokes – but worked hard to instill values and life lessons into his wayward nephew and somewhat spoiled, but lovable three children.

What was most interesting about this show was the actress changes for role of the wife.  The same wife played by two different actresses.

Also, the outtakes were used at the end of the show that gave viewers a behind the scenes view into the making of the show similar to a peek into family secrets.

Rounding out our top five best TV dads is the “brother” who seems to be the most prolific father on modern day comedy television – Terry Crews.

His roles as the “head of household” include playing Julius Rock on “Everybody Loves Chris” in addition to a stint playing himself on the reality show “The Family Crews,” and then playing Nick Persons on “Are We There Yet?”

Fortunately, he did not play all the roles at the same time, but when shows leave the air and go into syndication, it can seem that way.  In each case, his portrayal has been consistent – level-headed and caring.  Crews took ownership of his role and made the performances look effortless.

That rounds out our list, but since we are recognizing the best TV dads and with so few diverse ones on television currently, we did want to list our runners up whose trailblazing portrayals as Black fathers on television are still a part of our legacy and should be recognized.

We recognize our best TV dads and all of our television fathers.

You made us laugh, cry and sometimes cringe in remembrance of the things we did to disappoint at times.  For showing the world your diversity in character, strength in adversity and emphasizing that all Black fathers do not run from their families and responsibilities – we salute you.  Happy Father’s Day to you and thanks for the memories.

*denotes those who are deceased