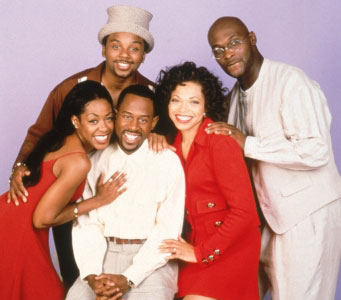 To many fans, episodes of “Martin” are just as funny today as they were two decades ago.

It’s hard to believe it has been 16 years since the “wuz up, wuz up, WUZZZZ UUUPPP!” intro faded from our small screens, along with that creepy CGI Martin climbing out of the TV.

But it’s true, the sitcom “Martin” about a Detroit disc jockey getting into shenanigans with friends officially wrapped more than a decade ago on May 1, 1997.

And while Martin Lawrence fans wait with baited breath for his return to the small screen (CBS rejected a sitcom pilot Lawrence recently pitched) he lives on in syndication. Fans still get to relive Sheneneh’s sass, Bruh Man—from the fourth or was it fifth floor—creeping into Martin’s apartment, and the ultimate “playa from the Himalayas” Jerome kicking game to Pam and Gina on TV One and MTV 2.

Regal recently rounded up fans and a “Martin” show contributor to reveal their funniest episodes of “Martin” and reflect on how Black sitcoms have evolved since the 1990s.

“I could watch those joints [episodes of “Martin”] back to back and still laugh,” said Desi Johnson, a New York-based standup comedian and contributor to Da Laughing Barrel website.  Johnson, who considers Lawrence a major influence in him breaking into comedy, said there are three episodes of “Martin” that are most memorable to him.

“[The episode of ‘Martin’] when he did the ‘New Jack City’ scene, parts one and two of Martin splitting up and getting back together with Gina, and when he went to LA.”

Johnson believes episodes of “Martin” are unforgettable because they featured relatable situations.

“[The show dealt with] when you lose a job, (and) when you and your friends have a fight,” explained Johnson. “(The) ‘Martin’ TV show was more realistic because not everyone was living well. Martin had a good job, Gina had a great job.”

Vaneese Pattman, a Nebraska-based blogger for Mommy Works a Lot, wrote that “Martin” was one of her favorite Black TV shows from the 90s because it had all the ingredients for success.

“The whole cast was just hilarious and they meshed so well,” she said

Pattman admits to not seeing every episode of the five season sitcom but highlights one episode of “Martin” that made her laugh out loud.

“I think my favorite was when Martin fights a boxer and he tries to push up on Gina and his face is completely ruined. That was just too funny,” recalled Pattman. “I just loved the whole cast.”

Imagine working with them. Bentley Kyle Evans was the producer, head writer and even starred in a few episodes of “Martin.”

In one episode of “Martin,” Evans appeared as a gay man flirting with Martin when he’s stuck in the DMV trying to renew his drivers’ license. It’s a classic episode of Martin because of two words: “almond brown,” a cute term of endearment Evans’ character throws at Martin.

“[We were] playing on the set and Martin said [to me] why don’t you do that character you were telling me about?” revealed Evans. “He said you got to try it.” Evans did, and it resulted in comedy gold as well as it being one of his favorite episodes, along with the episode of “Martin” where Sheneneh is introduced.

“My favorite episode is ‘Forever Sheneneh.’ Sheneneh and Kid (from the rap group Kid ‘N Play) went out on a blind date,” Evans recalled. “The episode was near and dear to me because it was my first TV episode ever and it was the first time we got to see Martin playing a female character; a girl from the hood.”

Evans recalled how “Martin” gave a lot of first appearances to up-and-coming hip-hop and R & B stars like OutKast, Tyrese and The Notorious B.I.G., which helped make the Thursday primetime slot for Fox a big hit with “Martin,” “Living Single” and “New York Undercover” rounding out the night’s programming.

According to Nielsen TV ratings, each of these sitcoms averaged 10 million viewers during the mid-90s. Nowadays, you would be hard pressed to find any predominately Black sitcoms on network TV, unless you count Fox’s “The Cleveland Show,” a cartoon comedy.

“Politically speaking, I feel there is definitely a void,” said Evans, writer and creator of the sitcom “Love That Girl!” “It’s sad our children aren’t presented with ‘The Cosby Show,’ ‘In Living Color’ and prior [Black sitcoms] that portray us in a different light because at least then we were being portrayed.”

A sentiment Pattman shares: “We don’t have ‘Martin’ or ‘Living Single,’ [shows] that show professionals in a positive light,” said Pattman. ‘The Game’ was close but it (eventually) took another direction. We need to see more shows like that, that are wholesome Black sitcoms.”

“What I’m trying to do with ‘Love That Girl!’ is (the) same type of feel as early to mid-90s and 2010 (sitcoms). The kind of characters that are super true to life,” explained Evans. “Other shows do (the) dramedy side, [but for me] it’s laugh first, structure second.  You want that fantasy [so people can] get away to laugh.”

Jeff Priester, a New York actor and illustrator, said there are very few Black sitcoms that have made him laugh recently.

“I watched the first half of ‘The Game’ when Derwin and Melanie break off [their relationship]” said Priester. “And then when Derwin got another girl pregnant, I didn’t care for that. I felt like it was feeding into (the) stereotype of Black men sleeping around. Yeah, it does happen [in real life] but Black shows are already under a microscope.”

Priester is also critical of the level of sex featured in certain Black sitcoms that ostracize family programming.

“I don’t need to see (a) thigh or side boob. It alienates certain people,” said Priester. “If I wanted to watch the show with my niece or nephew I couldn’t let them because of so much sexual innuendo, like on ‘The Game’ when they describe how ‘I had you against the wall.’”

Priester said episodes of “Martin” are timeless because they have the perfect balance of cast chemistry and funny writing.

Three of his favorite episodes are when Martin and Gina got married, the first appearance of “playa” Jerome and when Sheneneh and Keylolo got into a women’s professional group.

Robin Wilson, a New York social worker, said she still loves to watch episodes of “Martin” and other shows from the 90s era because she can easily watch with her son and vividly remembers her favorite episode.

“The episode when Martin got a ticket for driving through a stop sign. First he offended the officer by offering him a donut. Then at court Tommy got ‘da draws,’ Pam couldn’t handle the truth, Martin reminded Gina of Ike and Tina and called the officer a racist, when the officer’s wife was a ‘sista,’” said Wilson.

“The funniest part was when the officer told his wife to stand up and wave to Mr. Payne and stated, ‘she fine ain’t she?’  Martin’s reply was, ‘sista done took a walk on the wild side… you can always come home.’”

Check local listings for viewings of “Love That Girl!”