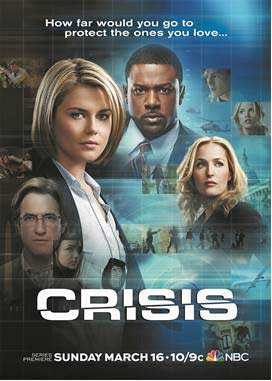 Television is currently experiencing a renaissance in serial programming.

Dramas like “Scandal,” “Being Mary Jane” and “The Haves and Have Nots” are creeping up left and right and finding enormous success and diehard fans.  One has to only look at social media to see how popular these serial programs are with fans.

Despite the great writing and acting, some shows like “Deception” fall into a Catch-22 because they have a great plot, but the storyline is so specific that it is hard for the show to keep things interesting and fresh.

Unfortunately, NBC’s “Crisis” might suffer the same fate as “Deception.”

True, “Deception” was canceled because of low ratings, but even high ratings will not last if writers cannot keep the audience engaged past a few episodes.

“Crisis” centers on a group of upper class students from Ballard High School in Washington, D.C. who are kidnapped while en route to a field trip.

The group of students include children of dignitaries and even the president’s own son.

Before leaving, one of the parents warns her child to remember the three B’s, which are be careful, be smart and be curious.

On a secluded and rural road, the bus transporting the students is stopped by local law enforcement officials, who overtake the Secret Service agents and force the children and chaperones on a truck.

They kidnap the children and adults, even going so far as to physically remove the GPS systems embedded in the affluent students’ bodies.

However, Finley is able to survive the attack, and escape into the woods with 12-year-old Anton (Joshua Erenberg).

The rookie Secret Service agent vows to rescue Anton’s classmates regardless of the consequences.

“Crisis” looks to have all of the key pieces in place like a great cast.  Gross is developing into a very versatile actor.  Furthermore, the actors chosen for the various roles look to be the perfect selections

It also has a unique storyline, one that will resonate with all parents, students and educators.

However, the show will struggle with keeping the same plot relevant on a weekly basis.

The only way to make it work is if the kidnapping is just the tip of the iceberg and the CIA is involved with it and other nefarious incidents.

The show is definitely worth a chance and the pilot episode is very good, but it seems that “Crisis” would have made for a better movie than a serial program that has to compete with the instant classics of modern television.